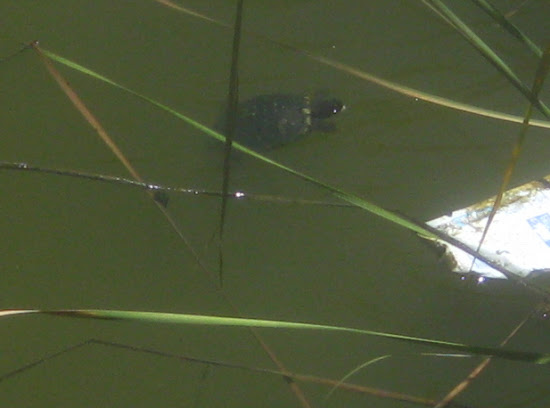 This is a rather large turtle I saw on the way to the store yesterday. I'd heard about there being a lot of turtles in the river, but I never saw them until a couple days ago when a dead duck was floating under the bridge. I'm not sure what happened to him, he floated with what was left of his belly up, which wasn't much. The turtles seemed to love the corpse--you can just barely make out the head of a turtle poking up next to a wing in this picture; 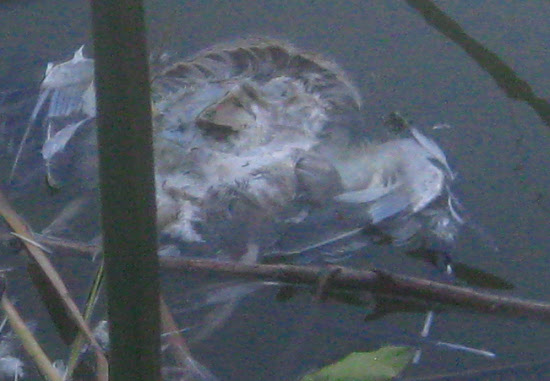 I can't help thinking of the Mock Turtle.

I don't have a lot of time to-day and I'll have less to-morrow as I prepare for Comic-Con. I'm getting supplies together for all the time I'm going to be spending sitting around in the convention centre, getting supplies with which I can pack lunches. I also made some cards to hand out for Echo Erosion; 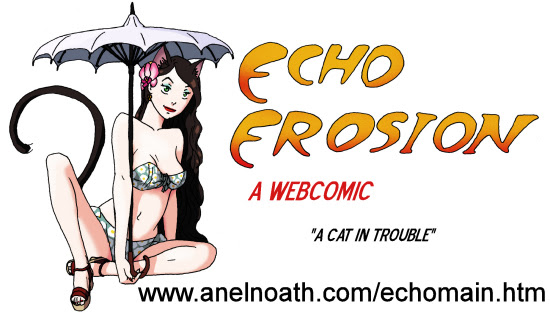 The tagline is a take off on David Lynch's tagline for INLAND EMPIRE: "'A Woman in Trouble'". I hope the concern I excite for the cat will be enough to overcome the cumbersome url. I wish I could've afforded a domain for this comic.

I used up my colour ink cartridge making cards and printing pages to take to the portfolio review--this seems to be a very good year for waiting around at portfolio review on Thursday, since practically nothing is going on on Thursday. I think the RiffTrax thing is on Thursday night, but I'm not sure I'll try and see it since it's been moved to one of the hotels outside the convention centre, as has all the Adult Swim stuff. First the anime rooms, now this. I like the idea of the convention just taking over the whole city, but I wish it didn't mean I'd have to walk so much to see everything I want to see. Hopefully it's not searing hot downtown, by the bay, like it is here, a ways inland.

It's going to be really sad that Ray Bradbury's not going to be there this year, though I see he's going to have two tribute panels, one of which is going to have Margaret Atwood, who's also going to be on another panel. I've never read any of her stuff, but it seems like a few people I respect really like her.

So far the panels I most want to see are Quentin Tarantino's for Django Unchained, the Firefly reunion (with Joss Whedon and most of the cast), and the Hobbit panel which Peter Jackson's been aggressively winking about. This could be a slow year at the Con, but I'm still looking forward just to being there. 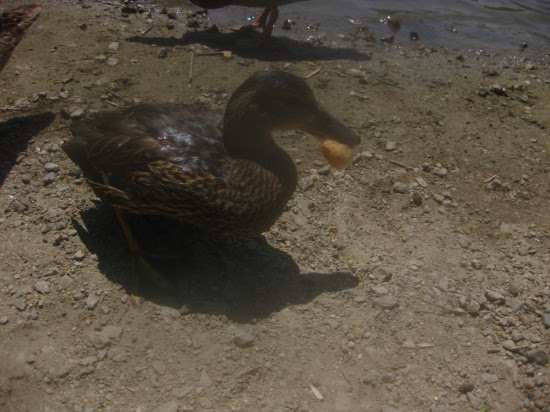 Posted by Setsuled at 2:44 PM
Email ThisBlogThis!Share to TwitterShare to FacebookShare to Pinterest