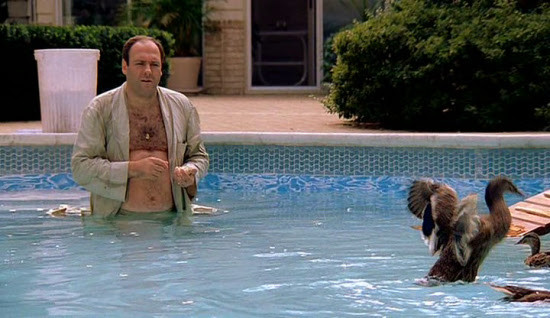 He may be a mobster but he likes ducks. So that's something going for him in my book. I'm three episodes into The Sopranos now. I think I watched the first episode in January and the second in April and the third just last night. Not really a reflection on the quality of the show so much as a reflection of all the other things I wanted to watch. So far I'm mainly liking what I see.

I was expecting Goodfellas: The Series as I knew the show shared a great number of cast members with that Scorsese film (27 according to Wikipedia). The Sopranos is a bit less realistic, though, which is to be expected, not only because Goodfellas is based on non-fiction, but because creating a world where all the character motives feel as credible and psychologically interesting as they do in a good movie is something that's eluded every television series I've ever seen. That's not where the strength of television lies. In terms of character, the people on a show are sort of like different points of view in a writer's head covering a long, ongoing hypothetical situation. Which, okay, is any work of fiction. But with television it's necessary to accept that's it not going to be as convincing. 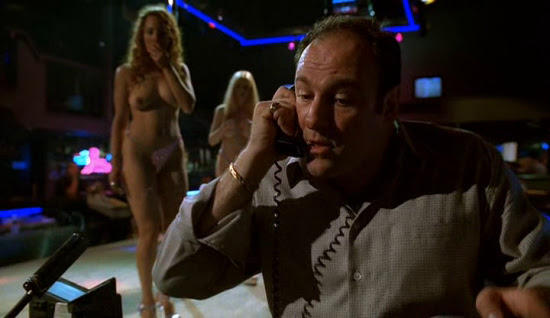 Which can be liberating--I'd say this could be at the root of why Buffy the Vampire Slayer worked better as a television series than as a movie. Within the first few episodes of The Sopranos, the unrealistically tidy mob lifestyle is used as a vehicle to discuss preoccupations about family, death, and self-perception. By providing an environment the viewer is okay accepting as artificial, the writer is free to explore these issues in a sort of vacuum, where the circumstances of the environment are poised entirely to suit the character development.

The show certainly features some above average writing. The especially artificial situation of a mob boss talking to a therapist is exploited for some nice material, as when Tony Soprano gets angry about a painting on his therapist's wall because he thinks the rotting tree in it is designed to "trick" him with psychological mumbo jumbo. It turns out there isn't even a rotting tree in the painting. 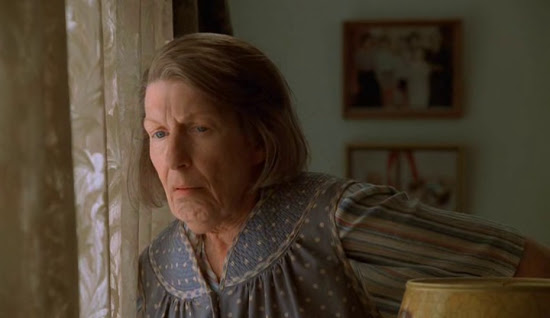 I do wish the show would have more gangster stuff in it, though. There was a nice scene last night where Tony and two of his guys are torturing a Hassidic Jew (they were hired by the man's Rabbi father in law). The guy talks about how the Jews survived Roman persecution and says spitefully, "And where are the Romans now?" to which Tony replies, "You're lookin' at 'em."

So far the weakest part of the show is Tony's mother, played with sitcom phoniness by Nancy Marchand, she also suffers from being tritely written. I'm sure there are people who have to deal with mothers who let the stove catch fire because they're busy snooping on the neighbours, but it sure doesn't make for interesting television. It's a more realistic setup, so it highlights the phoniness of the writing. I was glad to see she's written out of the show in the third season after the death of Marchand.

So I think I may stick with this one, at least for a few more episodes.