When Bread was New 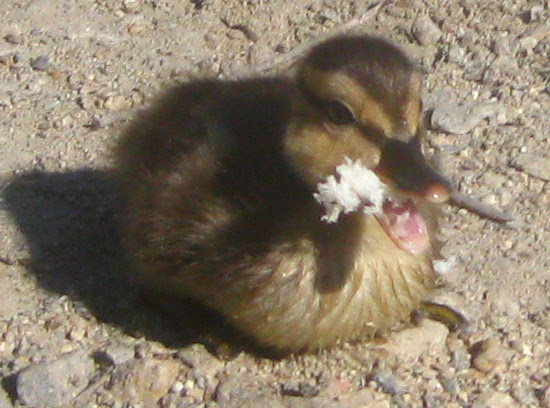 A couple days ago, I helped bring several of the local ducklings into the bread eating habit. I'm getting them while they're young now. I ought to've taken video and set it to Velvet Underground's "I'm Waiting for the Man".

Large pictures of duckling corruption on my Live Journal.

I went to see Prometheus again yesterday with Tim, who hadn't seen it. It remains a delightful and beautiful film. Although it was projected wrong--something felt funny in the beginning, and then I became sure when the P and the S were cut off on the sides of the title when it came up. I went out and complained, saying that the matting was wrong before I came back and realised the shutter things on the sides were as open as far as they went--the film was simply being projected on a screen too small for it and the staff didn't care. I bet Madagascar 3 was projected properly.

They were showing a few other movies that I wanted to see--Ted, The Amazing Spider-Man, and I even kind of want to see Snow White and the Huntsman. Money's been especially tight for me lately so I'd carefully been setting aside enough to see Prometheus again since a saw it the first time a few weeks ago. And by yesterday, there still was no movie I wanted to see more. I'm hoping it's done well enough to get a sequel--I like this quote on the Wikipedia entry; "Further detailing his sequel concept, Scott stated that it would follow Shaw to her next destination, 'because if it is paradise, paradise can not be what you think it is. Paradise has a connotation of being extremely sinister and ominous.'" The possibilities, just in terms of visual filmmaking, of such a Ridley Scott movie are extremely tantalising.