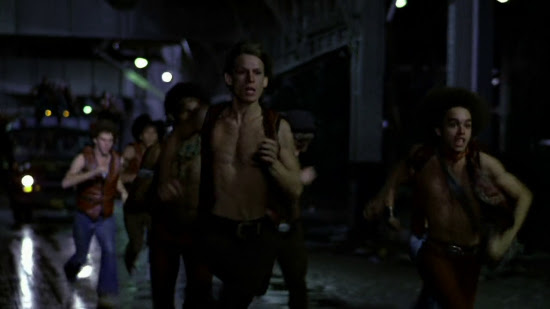 Despite its name, 1979's The Warriors seems to be about a group of guys mainly running away from stuff than standing and fighting. But I guess that's sensible when there's only nine of the gang called The Warriors up against a conglomeration of gangs numbering apparently in the thousands and the movie does a very good job of creating an impression of a night world where practically everything is controlled by gangs operating mainly on animal impulses of fight or flight and maybe a tiny sliver of control is had by the faceless, insensitive police force. The Warriors is a nice, raw, adventure suspense film.

Just as I was getting sick of seeing the Warriors running away all the time, they do turn around and fight a gang of guys wearing baseball uniforms and clown makeup, wielding baseball bats naturally enough. And the Warriors show themselves to be capable fighters, and director Walter Hill does a good job putting together fight scenes, though the climactic conflict is deflated somewhat for anyone who's seen Yojimbo--I appreciate a homage, but The Warriors leans on one small piece of Yojimbo's climax for its whole punch. 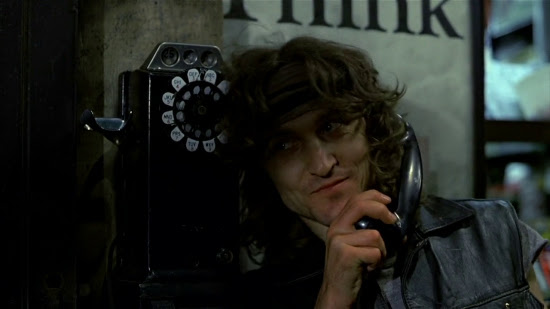 I would say David Patrick Kelly is at least as an effective psycho gunfighter as Tatsuya Nakadai in Yojimbo. Maybe moreso, as Kelly's Luther is clearly motivated by a purer thirst for blood and chaos, while Unosuke was motivated at least partially by a desire to see his gang control the town. David Patrick Kelly is one of those actors like Christopher Walken or Jeff Goldblum who seems to have developed his body language and vocal mannerisms in an alternate dimension. It works great here as he creates a villain whose actions seem dictated by an internal system of motivations, but they're so weird he's frighteningly unpredictable. 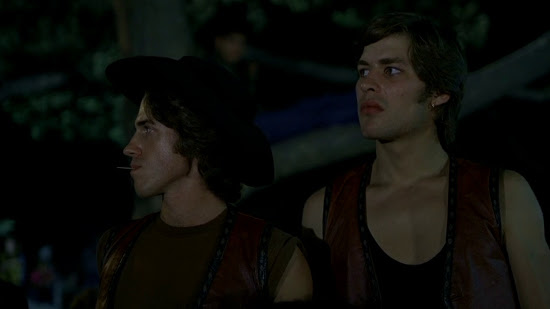 The heroes of the film are a satisfyingly gritty, jaundiced and lanky in a very 70s way bunch of guys. Looking at them I can't help thinking razor technology has improved vastly in the decades since.

There are a lot of homophobic slurs casually tossed about, which is appropriate for a group of hoodlums in the 70s--it would be bullshit if they didn't talk like that, and their attitudes towards woman also fit the characters. But there is a gay guy in the gang who saves them when a female gang tries to kill them with sex. You wonder how the hell the homophobic mugs let him into the gang, but instead of seeming inconsistent, it gives the impression of guys who've formed a bond created by circumstances of life that have overridden their posturing. 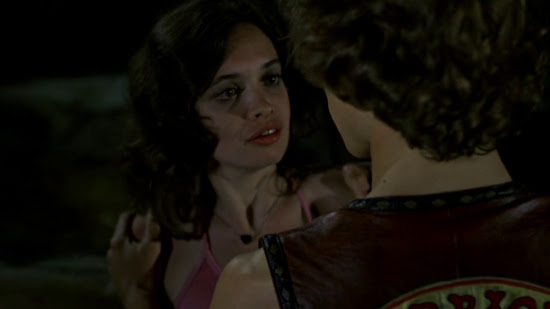 The only female gang member, who joins them in the latter portion of the film, is so small and punchy you worry for her, especially when the leader of The Warriors, Swan, rather harshly turns down her offer of casual sex, but this again rings true for the paranoid, hunted animal mentality the movie gives to the young men.

It's above all a movie of this atmosphere, this feeling of being alone in a very dangerous world. The music by Barry De Vorzon and Joe Walsh, especially if you're watching a copy with good sound as I was, rocks enough to give you an idea of what's appealing about their precarious and violent lifestyle. 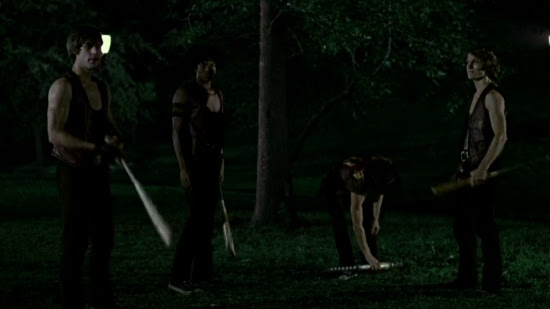