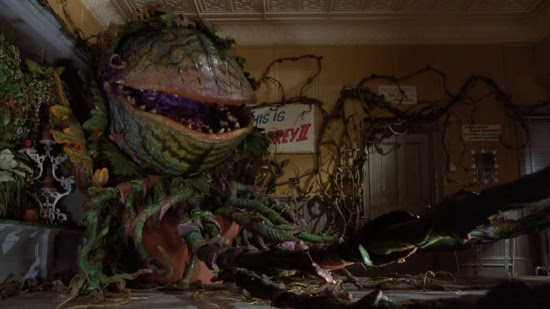 It may be easy to say Audrey II, in 1986's Little Shop of Horrors, represents violent lust, a reflection of the baser motives not only of the male lead, Seymour, but the supporting cast. But it's interesting to contemplate how this metaphor functions and as one does so, it's no surprise the original 1960 film was deemed fertile ground, shall we say, for reinterpretation as a Broadway musical and then as another film. This Frank Oz musical film is superficially delightful version and is a statement of satisfying depth on the nature of sexuality, competition, sadism, and the Id.

I'm reminded of Nietzsche's statement about tragedy, that the Apollonian devices are ultimately used to reaffirm a Dionysian truth for catharsis. That's why Audrey II is so likable. The idea of using a man eating plant as a metaphor for the animalistic side of humanity is the Apollonian device, and whenever it succeeds, it reaffirms the supremacy of man's animal nature, the Dionysian. And yet it's a plant. Let's not get confused. Maybe "natural" is a better word. 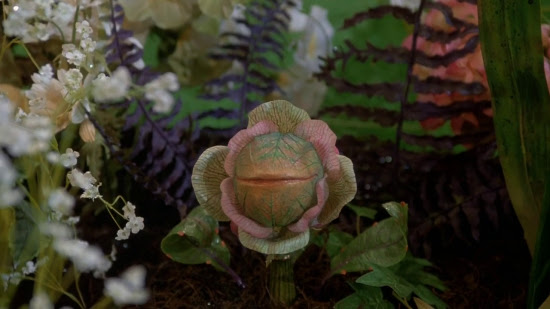 Of course, the triumph of the Dionysian was more complete in the film's original ending, which was removed due to consistent, strong dislike from test audiences. This original ending won't even be released in colour until October this year. Which is too bad because I suspect it'll strengthen the film a great deal--I don't have a lot of faith in test audiences, it was test audiences who were largely responsible for butchering The Magnificent Ambersons. Reading most internet forums criticising any artform demonstrates again and again people really don't know what they want, or they're afraid to admit it. And of course, the weirder it is, the harder it is to admit.

Seymour and Audrey (I) are certainly a likeable couple and not exactly representative of the normal alternative to Audrey II's dominance. Seymour's a prototypical odd little nerd who's made interesting by his peculiar relationship with the plant, and Audrey is a prototypical "easy" girl made interesting by her own odd predilections--her irrepressibly strange perspective on what she considers a normal life as demonstrated to her by Better Homes and Gardens Magazine and of course her atypical idolisation of Seymour, made stranger by the fact that she doesn't see it as strange. 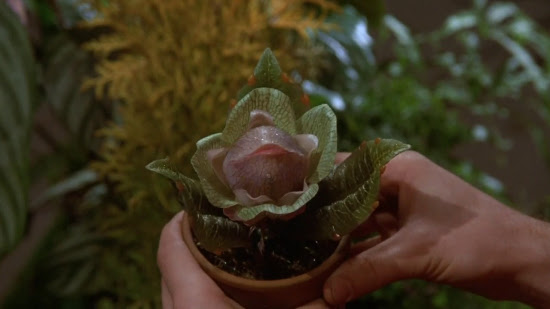 The venus fly trap is a common metaphor for a vagina, yet with its mouth closed Audrey II looks phallic and of course it's more directly tied to Seymour. Yet the name "Audrey II" ties it to his perception of Audrey, as does his attempts to use it to attain her love. The fact that this involves killing a conspicuously violent rival, the sadistic dentist played by Steve Martin, again reaffirms the Dionysian reality underlying everything, as does the fact that Audrey's affections never needed any encouragement. Violence isn't reflective of any internal logic--the Apollonian arranging of reality where Seymour expects to receive certain things in response to his actions is entirely his Apollonian delusion, an organising of the universe to explain why he doesn't have what he wants or needs. 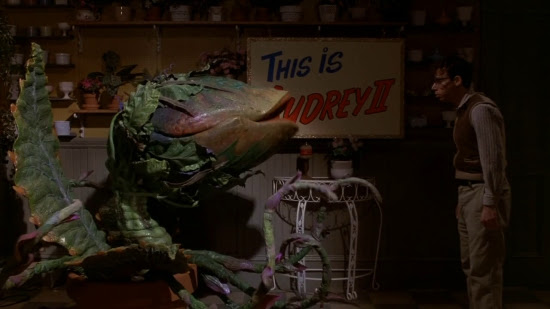 And Audrey II brings status and fortune, concerns based on cold perspectives on reality, and Audrey II's connexion to them emphasise the carnal nature of capitalism. In the beginning, Audrey and Seymour dream (Apollonian) of success and it's wonderful. Then, in the original ending anyway, the brutal reality of success is manifested by Audrey II (Dionysian).

Posted by Setsuled at 4:01 PM
Email ThisBlogThis!Share to TwitterShare to FacebookShare to Pinterest