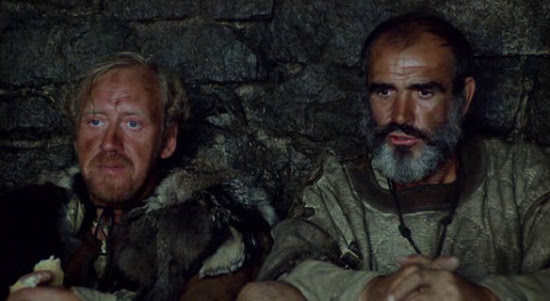 Sean Connery and Nicol Williamson play two legendary English characters with inexplicable Scottish accents in 1976's Robin and Marian. Though considering English was very different in the period during which the movie takes place, the accents really aren't that big a deal. Connery plays Robin Hood and, no, Williamson does not play Marian, he plays Little John. Audrey Hepburn actually plays Marian, delivering possibly the most complex take on the character in any work of fiction. Robin and Marian also pays unique attention to the realities of the Crusades at the time and the behaviours of King John and King Richard. It's a movie about the idealism of youth giving way to the spiritual fatigue of old age, though it also honours the value of that idealism. It's a very flawed film, but it has several good points.

Connery's take on Robin Hood must be the most innocent, simple hearted character I've ever seen from him. He's an aged Robin Hood but he's still the good natured man of the wood and to some extent one can see the Errol Flynn character in him. But all in all, I actually found this Robin Hood to be weakly constructed. It's something that stems from the film's attempt to acknowledge some of the more brutal realities of the Middle Ages--when Marian asks him why he followed King Richard even after he saw Richard slaughtering women and children for no real reason, Robin explains, "Well . . . he was my king." This might be a sobering look at an average man at arms caught up in the crusades, but coming from Robin Hood it makes absolutely no sense. He won't stand up to a king who murders children yet excessive taxation is over the line? 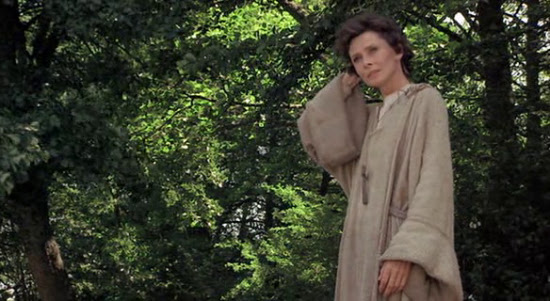 Hepburn's take on Marian is more interesting, a mature woman who finds herself a little perplexed by the passion of her youth but finds a new, more gracious love for Robin.

Robert Shaw gives an uncomplicated but satisfactory performance as the Sheriff of Nottingham. The climactic fight between him and Robin has real tension--I definitely wanted Robin to win, though partly it was because I was hoping the movie wouldn't go for the cheaply grim spectacle of having old Robin beaten down at last. 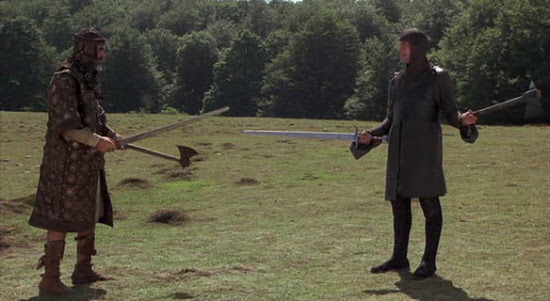 There aren't quite enough close-ups and one feels a bit removed from the action. The two actors stumble through heavy hacking attacks which is probably close to how such a duel would have looked in the Middle Ages--this is actually a couple centuries before the refined fencing techniques one is familiar with from swashbuckler movies would begin to emerge. But it's part of the reason the more anachronistic duel between Errol Flynn and Basil Rathbone is so superior. Nothing in Shaw and Connery's battle equals the desperate fervour conveyed by Rathbone and Flynn. 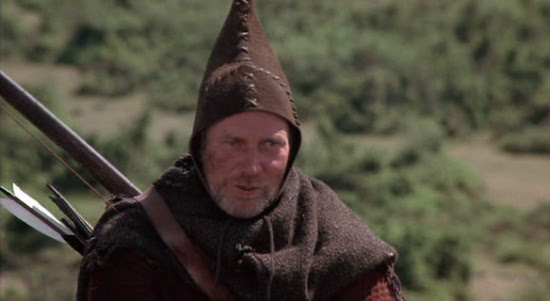 There's a hell of a supporting cast in Robin and Marian. In addition to Williamson as Little John, there's Richard Harris as Richard the Lion Heart, Denholm Elliot as Will Scarlet, and Ian Holm has a very small role as King John. The ending of the film doesn't feel quite earned, but the combined might of acting talent, particularly the chemistry between Connery and Hepburn, make this a lovely enough, bittersweet tale.