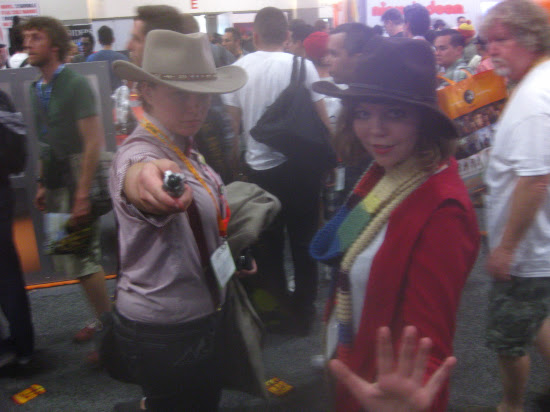 This is the best fourth Doctor I've seen at the Comic-Con. It's also the third I've ever seen. So far I've only seen one guy dressed as the fourth Doctor, a couple years ago, and it was haphazard enough to be pointless--just a stripey, not even past waist length, scarf, a cheap brown fedora, a t-shirt, jeans, and tennis shoes. Sure, I mainly take pictures of girl cosplayers because I'm a letch, but even if I weren't, girls just by and large seem to have better costumes. They even dress as guys better than guys.

Though the girl in the background of this picture, dressed presumably as the ninth Doctor, probably oughtn't to have bothered; 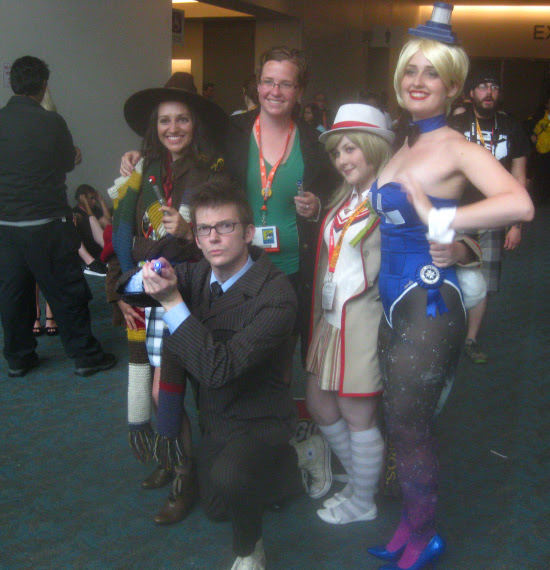 On the right is, yes, a TARDIS bunny girl. This was simply a great idea. I love bunny girls. I don't care what that says about me.

It was my favourite TARDIS costume and I saw quite a few, and even more TARDIS hats. 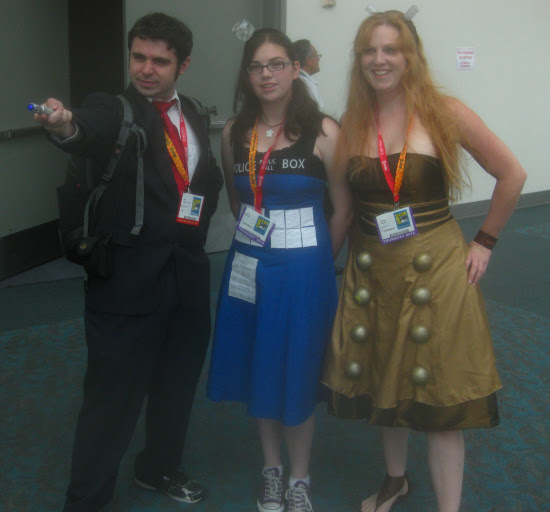 This TARDIS dress was the most conservative TARDIS outfit I saw--the Dalek dress next to her was one of many Dalek dresses I saw. There was a little girl in a red one at the panel on Sunday who enchanted Smith and Gillan. This little TARDIS won the adoration of every woman he walked past waiting in the Hall H line; 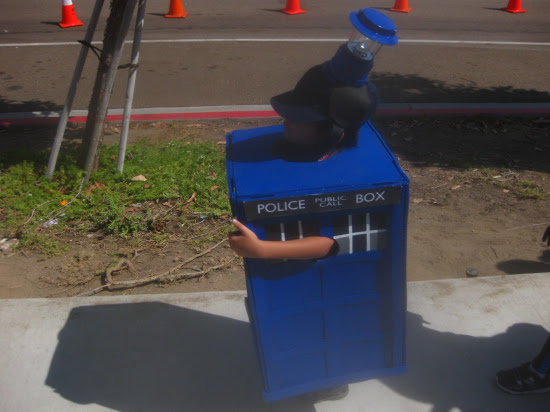 I just really hope word doesn't get around his school he dressed as something called a "TARDIS".

I was up at 5:30 to get in the line for Doctor Who. Before it were the panels for Fringe and Supernatural. The hall was filled before the Fringe panel began and I was lucky enough Fringe fans didn't care about Supernatural or Doctor Who and chose to leave after that panel, allowing me and a few hundred other people into the room. Since I've never seen Supernatural I took the opportunity to use the restroom. I felt compelled to get this picture because there were celebrities of sort on stage, but you can see I didn't bother trying to get close; 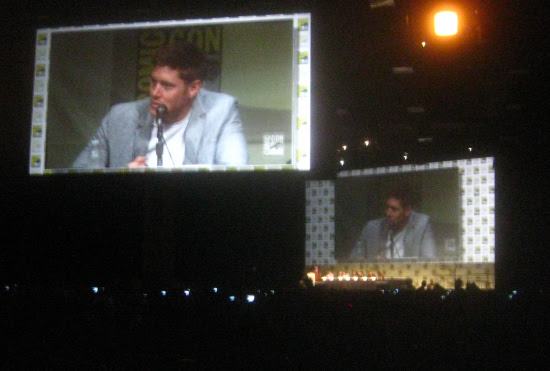 It's always weird listening to a panel for something wildly popular you know nothing about, listening to the handsome stars of the show coyly avoid answering certain questions and trying not to seem too taken with the adoration they're receiving. One young woman blushingly offered to carry star Jensen Ackles' baby, something the moderator of the Doctor Who panel mentioned to Matt Smith, causing Smith to remark, "We have time, I'm sure we can squeeze something in."

I got footage of the Doctor Who panel, but I don't have to edit and upload it because someone else uploaded longer, closer footage already, so here you go;

Adhering to the request of Con administration and the various studios, the person who took this video has omitted the preview footage from season seven that was shown. There were two rather long clips, first from the Western episode, "A Town Called Mercy", which was all right, and at the end of the panel Steven Moffat presented a very long clip from "Dinosaurs in Space", the second episode of season seven, which was a funnier clip, though hampered slightly by the too busy quality the new series occasionally has. The Doctor puts together a gang comprised of Queen Nefertiti, an Edwardian, vaguely T.E. Lawrence type played by Rupert Graves (Lestrade on Sherlock), Amy and Rory, and Rory's dad, played by Mark Williams, who's accidentally brought along when the Doctor materialises the TARDIS around Amy, Rory, and his dad while the three are trying to change a light bulb and the Doctor becomes alarmed later when he finally spots Rory's dad and demands to know how he got onboard the TARDIS.

It was a good panel, I liked Matt Smith's enthusiasm about Comic-Con, and Karen Gillan, as usual in interviews, feels remarkably in love with Doctor Who. Arthur Darvill seemed like he was recovering from a nervous breakdown and Steven Moffat didn't talk nearly as much as I would have liked. The panel was moderated by Chris Hardwick of The Nerdist, who's a funny enough guy and seemed to have struck up a genuine friendship with Matt Smith, but it has to be said Hardwick dominated way too much of the panel, which I think actually rankled Moffat a bit--after someone offstage mentioned there was time for just one more audience question and Hardwick began making jokes about what an unpopular thing to say that was, Moffat dryly pointed out when Hardwick was finished that there was now time for no questions. 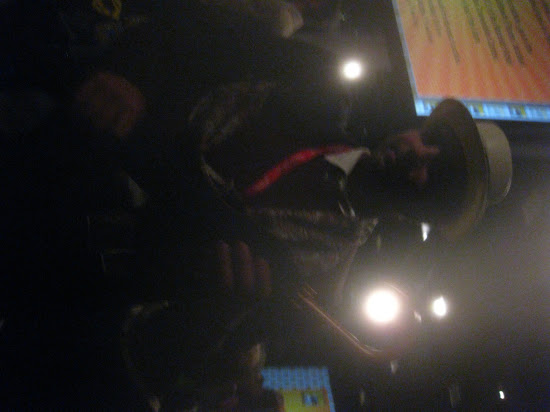 He sadly remarked that his costume was incomplete, but I was impressed just by the fact that he'd gotten the right shoes; 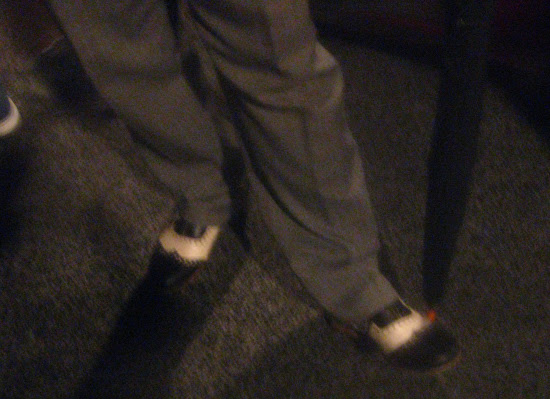 Posted by Setsuled at 2:57 PM
Email ThisBlogThis!Share to TwitterShare to FacebookShare to Pinterest