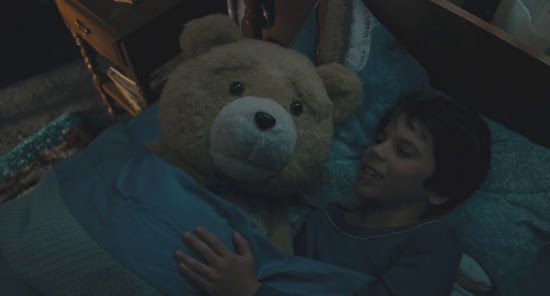 Now let us go back to that year of myth and wonder, 1985. Or so that year seems in Seth MacFarlane's Ted, set in Boston at a time when kids gleefully received inarticulate Star Wars figures in plastic suitcases shaped like Darth Vader's helmet for Christmas and one lonely little boy was delighted by the gift of a giant teddy bear, which he unimaginatively names "Teddy", which possibly is to be expected from an eight or nine year old boy so excited to receive a teddy bear. It's a story that plays like a rote fantasy adventure, following a pair of friends on a formulaic trip through growing up, fleeing the hazy sitcom conception of maturity having something to do with getting a job, an apartment, and marrying your girlfriend. It's an okay movie, with several genuinely funny moments, though with a sincerity rendered pathetic under the weight of its writer/director's faith in formula. 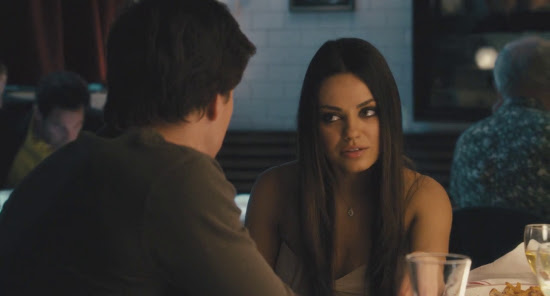 I first heard of Ted on April 1st this year, in the form of a Twitter account and a facebook page for the titular character. I immediately "liked" and "followed" because I thought it was a really good April Fool's joke on the part of Seth MacFarlane--I love when people go to great lengths for an April Fool's joke, and I was amused to see he'd gone so far as to get Mila Kunis and Mark Wahlberg to perform some cliche romantic comedy scenes--him accidentally hitting her in a club while trying to dance, the two of them failing to paint a room as they fall into giggling and going at each other with paint brushes. I thought it was a good joke, this idea of taking an 80s trope of the puppet oddball who fits into the family unit of human characters (Short Circuit, ALF), and adapting it to 2000s cliches of the gross-out buddy movie. I thought there MacFarlane was showing an insight tempered by whimsy, as most of the best stuff on Family Guy tends to be.

Then on April 2nd, all of the Ted sites and social media pages were still up. Now I've actually seen Ted, full length, and it still feels like an April Fool's joke to me. 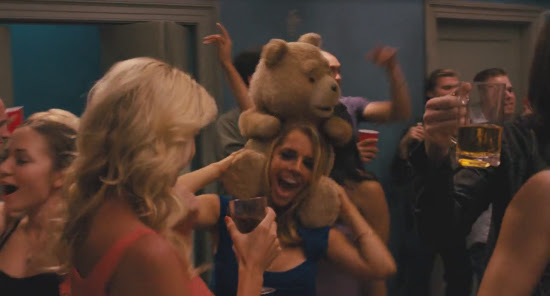 It's really strange, actually. How can I have watched an hour and forty five minute story without feeling like I'd watched a real movie? Maybe it's MacFarlane's amateurish directing, liberally exploiting standard shots almost constantly, from several whooshing crane shot set-ups of bands at parties, to the first setup exterior shot of Wahlberg's and Ted's apartment building. I think it's more to do with the sitcom logic in the writing, like Ted, after being told by Wahlberg that his girlfriend wants Ted to move out, getting a job at a local supermarket and immediately being able to get an apartment--we have here the standard girlfriend ultimatum to test of buddyhood along with the persistent American delusion that Want Job = Get Job = Get Apartment. But one senses MacFarlane does this knowingly, especially since he makes the circumstances of Ted's hiring absurd--Ted insults the boss, who hires him because he likes Ted's boldness. There's a winking double absurdity in the absurdity of the idea at one level, and the extreme absurdity of the guy promoting Ted after Ted bangs a girl with a vegetable he then sells. It's MacFarlane saying, "I know this is stupid, and that's why it's funny," and he is right, which is where a lot of Family Guy's humour comes from.

Ted's problem is that it takes this absurdity seriously. MacFarlane actually leans on the cliché plot of the boyfriend/buddy/girlfriend problem triangle because he has a genuine affection for this stuff, losing sight of the fact that it's in mocking it he achieves most of his humour. MacFarlane's shows have always lacked a basic sense of heart, except in episodes written by writers like Daniel Palladino, which is why MacFarlane's shows don't connect as well as The Simpsons. MacFarlane's funny, but I get the impression he's kind of a phoney. But he's a real phoney. That's it--he's a male Holly Golightly. 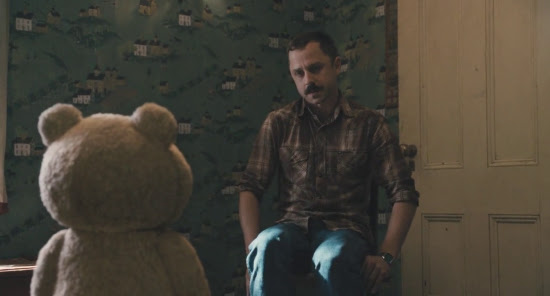 Like I said, Ted is genuinely funny. My favourite part was Giovanni Ribisi, who kidnaps Ted, motivated by a childhood obsession with the talking bear. Ribisi invests the character with a genuinely interesting weirdness, and somehow the funniest part of the movie for me was watching him enthusiastically dance to the music video for Tiffany's version of "I Think We're Alone Now".