What's he been doing, Precious? Reading his bookses? Yes, Precious, he has! Until late last night, and then during lunch and tea after class, reading, reading, reading, knowing all the while I'll never feel like I've read enough and knowing that anyway the real purpose of this essay is just to regurgitate the ideas that have been presented to us in class. I mean, who am I, who is anyone in the class, to presume they're going to define American literature in any way significantly different than it's ever been defined before? I'm so glad I don't have to grade these papers.

But I have the compulsion to write something I think of as interesting, however impossible that may be in the parameters. Not to mention reading H.P. Lovecraft's essay, "Supernatural Horror in Literature", enticed me with something like just under eight million books and stories I haven't read from the past few centuries. I'd probably read a lot more often than I do if silence didn't make me irritable.

By the way, to those interested in the evolution of language, one little thing I've noticed in comparing Washington Irving with Lovcraft is that Irving uses the word "diffuse" to mean distributing or propagating in equal degree to a number of subjects or throughout a location while Lovecraft uses it to mean to nearly extinguish.

In the above mentioned essay, Lovecraft speaks somewhat derisively of the "infallible detective" type, the "progeny of M. Dupin and Sherlock Holmes". One of the ways fiction has evolved to make such detectives interesting since Lovecraft wrote that is to show that being a deductive genius and/or inductive genius doesn't mean you're perfect and in fact may be symptomatic of peculiar psychological problems. Case in point being the thing I took time off from reading to watch this morning, another episode of the new anime series Hyouka (氷菓), whose resident infallible detective developed his mental abilities out of laziness--obsessed with conserving energy, he tries to solve all problems in his head to avoid as much fuss as possible.

I'm liking the show more and more. Five episodes in, the format seems to be to present a new mystery every episode, sometimes pieces of a larger mystery spanning several episodes. The show follows the now typical, Haruhi Suzumiya-ish school club format, in this case a club devoted to classic literature, though the students have yet to discuss any piece of classical literature. In the episode I watched this morning, the mystery involved the math teacher of one of the students of the club upbraiding students for not knowing the answer to a question on the board, not realising that he was asking them to solve a problem from a chapter they hadn't yet studied. The mystery put to Oreki, the lazy detective, is how the teacher could have made this mistake.

It seems like an oddly innocuous mystery at first, but there's a subtle, intriguing undercurrent in a mystery presented almost as an aside--why did Chitanda, the student whose class it was, become so angry at the teacher's mistake when she's usually very tranquil? The episode doesn't answer the question, but one can deduce it from the arc concluded in the previous episode, when the students finally solved the mystery of why Chitanda's uncle had been expelled from the same high school back in the sixties--it had involved school faculty using him as a scapegoat. When one considers this, one can see why Chitanda is set off by school authority figures using their position to rebuke students unfairly.

This subtlety in storytelling is unusual for anime. Another thing I like, which seems to show the influence of Sayonara Zetsubo Sensei, is the surreal depictions of the detective's mental process and visualisations of the stories brought to him. In this case, we don't see the incident where the teacher is yelling at the students, we get Chitanda's second hand account, and as she tells the story we see Oreki's conception of the situation as her being the lone human in a class populated by crash test dummies, some of whom are wearing kabuki masks. 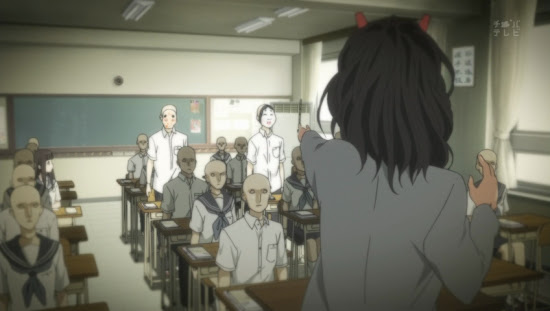 In addition to creating an impression of Oreki's naturally imperfect knowledge of the situation, it subtly conveys his feelings and those of the students generally with a satisfying strangeness. 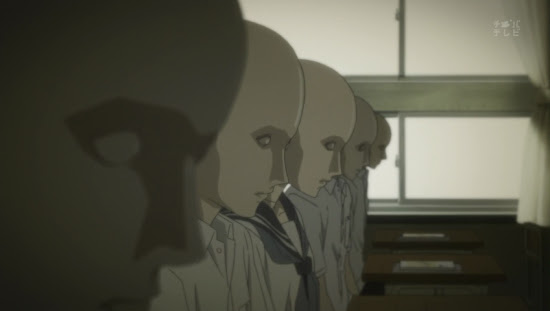 So it's a cut above average, not nearly as moe as I thought at first, except for an ending theme segment that drops some moe on a cosmic scale, infantilising the two female characters. To my shame, it appeals to the otaku in me. Call me a pig, I deserve it.

Posted by Setsuled at 7:32 PM
Email ThisBlogThis!Share to TwitterShare to FacebookShare to Pinterest