She Really Does Need Some Blood 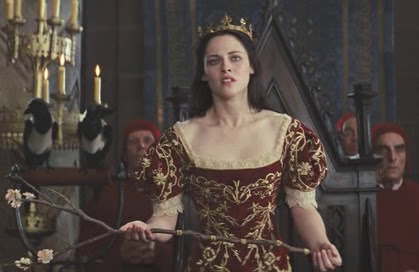 You know, I don't think Kristen Stewart is a very good actress. I know that's a controversial statement, but hear me out. In Snow White and the Huntsman, she mainly just seems to fluctuate between this facial expression; 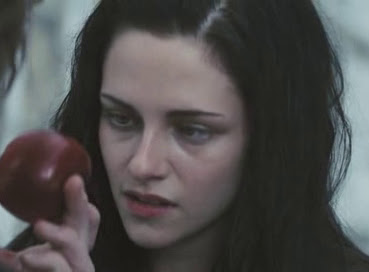 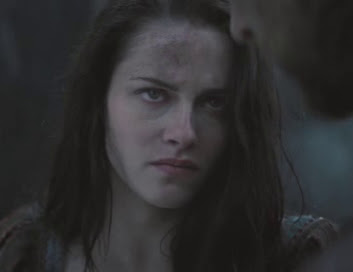 Mouth open or closed, basically. Except sometimes she looks like Bababooey. 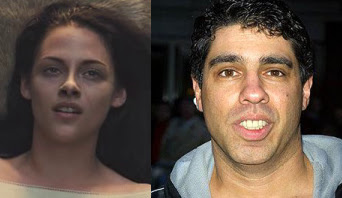 That's a cheap shot, I know. But it comes from a building consternation at watching her in the movie, wondering how this person whose face seems to be flush with novocaine at all times ever connected with audiences. She's by far the least interesting aspect of the movie, but Snow White was the least interesting aspect of the old Disney movie, too, though at least there she was animate(d).

As a matter of fact, Snow White and the Huntsman has a lot of good qualities. You couldn't ask for a better group of actors playing the dwarves than Ian McShane, Bob Hoskins, Toby Jones, Ray Winstone, Nick Frost, and Brian Gleeson. Together they give a great deal of weight to the movie. Charlize Theron as the evil queen is superficially written and performed with pat frothing on waypoint lines like "WHERE IS SHE?!" "BRING HER TO ME!!" as she smacks her henchmen. But her costumes are absolutely wonderful. I particularly loved this one, with a headdress that gives her coif contours without encasing her and the gown with what looks like tiny bird skulls; 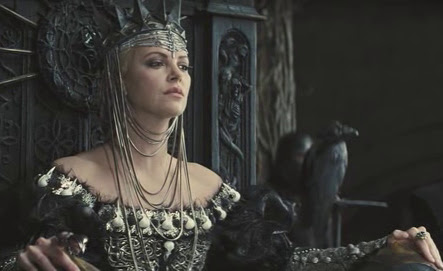 Chris Hemsworth is good as the broadly sketched, Madmartigan/Han Solo-ish huntsman, played with a vaguely Scottish accent presumably to sound like Gerard Butler in 300.

In fact, this movie, which I would describe as generally flat footed, is fascinating in how it shows the ways in which innovative fantasy films of the past thirty years have filtered through to the likes of an academic, commercial director like Rupert Sanders. There's the Great Forest Spirit from Princess Mononoke; 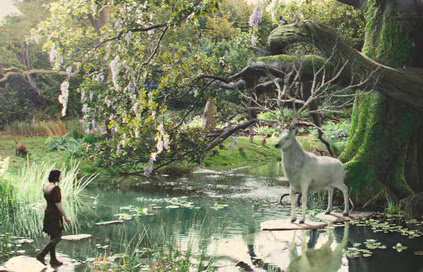 The roguish hero who might be in it just for the money, the beautiful costumes and scenery that look like they were raided directly from the Lord of the Rings and the Chronicles of Narnia productions.

Homage is fine, and if precedent is good, why not follow it? The trouble is, Snow White and the Huntsman never amounts to more than homage. Particularly detrimental is the lack of focus in creating its characters. Snow White is introduced as a pacifist with possibly magical charming abilities, as she chooses to gently commune with a troll rather than running from him, and has to be taught a basic tactic for using a knife at close range by the huntsman. "I don't know if I could do that," she says, to which he replies, "You might not have a choice."

But without even a moment where she thinks about how or why she might do it, at the end of the movie she's leading an army to take back her childhood castle from the evil Queen, casually batting arrows away with her shield and hacking through soldiers without a second thought. It's obvious why it was written like this--violence is the only meaningful solution to a fantasy story these corporate filmmakers have the courage or imagination to conceive of. Lazy thinkers will call this a feminist subversion of genre, though I'd ask those lazy thinkers to contemplate, if they could, just how boring the ending of this movie would be if there was a man in the role. I'd also point out that the great medieval fantasy movies of the past thirty years didn't climax with the hero solving things with violence--The Lord of the Rings, Princess Mononoke, The Princess Bride. Which is not to say I have anything against characters resolving things with violence, I'm just saying there's no reason one should feel one has to to validate the character, particularly when it contradicts what few personality traits the character was given.