I guess it's obvious I've been trying to catch up on some 2012 movies lately. Yesterday I crammed in three films. One was pretty good, one was great, and one . . . had its moments.

Like most movies critics complain of being too confusing or complex, Cloud Atlas isn't hard to understand at all. It's really an anthology film connected by a belief in reincarnation and karma and thematically connected by the human social dichotomy between oppressors and oppressed. It works often enough to be an enjoyable film, though there are a few scenes that ought to have been trimmed. The Wachowski siblings have a real talent for cleanly effective strings of narrative, though, and the movie pulls you through its plot like a ripcord.

I suspect the quality I most dislike about Wachowski movies is related to the fact that their stories go down so smoothly--namely, the moral simplicity. It's a movie that shows how characters who are evil in one lifetime can become good in another lifetime, while it's also possible for souls to resist changing, as demonstrated by Hugo Weaving, who's always evil, interestingly finally becoming a hallucinatory manifestation of Tom Hanks' evil inclinations.

All the stories are melodramas, except for the one where Jim Broadbent is tricked by his brother into living in a retirement home, which is a comedy. None of the stories involve a lifetime where the biggest choice someone faces is whether or not to declare something in their tax returns--every story presents big, clear cut moral choices, whether it's to help a stowaway slave to freedom, to expose a conspiracy by an oil company that will lead to hundreds of deaths, to liberate a race of clone slaves, or to assist a stranger in climbing a mountain despite religious differences.

The most complicated and interesting story takes place in 1936. Ben Whishaw and James D'Arcy as a pair of lovers have the most interesting and nuanced relationship of any two people in the film, despite sharing little screentime. Whishaw as the more cavalier, wiser and ultimately more sensitive Frobisher and D'Arcy as the more grounded but sort of spiritually helpless Sixsmith work very well. Mostly the story concerns Frobisher's experiences working for a composer played by Broadbent, transcribing his symphonies before composing his own, the "Cloud Atlas Symphony", the bit played in the film actually being pretty good. Broadbent tries to steal it, of course, because he's the villain in this story, and Frobisher's decisions aren't so much deciding between good and bad as surviving Broadbent's bad decision.

The makeup and costumes used to cast the various prominent actors as people of different races and sexes uniformly fail, at best making people look deformed and at worst making them seem as though they were in a Saturday Night Live sketch. Hugh Grant can't even do an American accent, to say nothing of Doona Bae. I thought about how Ang Lee completely reshot several scenes in Life of Pi because he decided Tobey Maguire was too recognisable a star, resulting in Maguire not appearing in the film at all. Obviously we're seeing a very different philosophy at play here. The white people as Asian characters were about as convincing as Katharine Hepburn and Walter Huston in Dragon Seed. 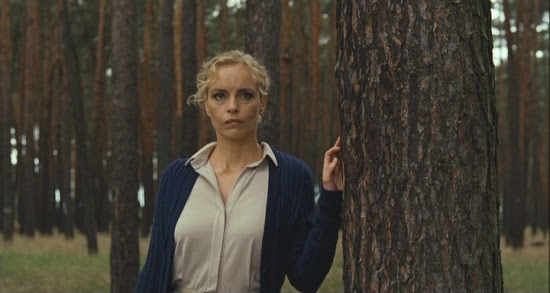 For a truly complex tale, there's Christian Petzold's Barbara, which was the best film I saw yesterday. Set in 1980 East Germany, Nina Hoss plays the title character with brilliant subtlety as she struggles with one difficult decision after another in a story of life's imperfections and beauty arising from the scarcity of solace.

The communist government is passive-aggressively punishing Barbara for requesting to leave East Germany. An excellent doctor, she's sent to work in a rural clinic and given a lousy apartment to live in where she has to endure regular inspections, including cavity searches. She's monitored more covertly by Doctor Reiser at the clinic, a young man who flirts with her and attempts to gain her trust while actually falling for her. 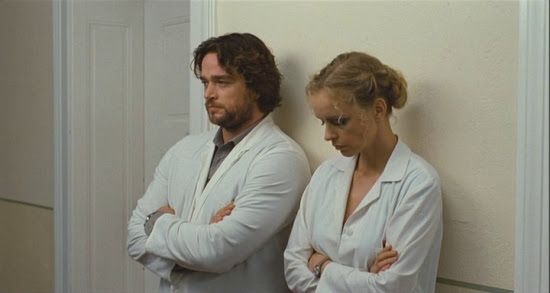 Meanwhile, Barbara's secretly seeing her West German lover and the two are planning her escape. But the decision to do so becomes complicated when she proves to be indispensable at the clinic, exhibiting a talent for diagnosis more insightful than Reiser's.

It's mainly a story about how people commune and coexist in false circumstances. Barbara's emerging affections for Reiser are real but also palpably created by intolerable social environment--one senses these two would never consider getting together otherwise.

In a sense, they both give in to manipulation. In one fascinating scene, Reiser tells her about being a young doctor caring for premature infants. One night, he allowed an assistant to handle some new life support machines from New Zealand, which resulted in an error that caused two infants to be blinded for life. He blamed himself, of course. Then Barbara asks him what kind of machines, specifically, the new ones from New Zealand were and when Reiser takes too long to answer she realises the whole story was fabricated, a miniature bit of propaganda to win her sympathy.

Reiser's interest perhaps becomes genuine when he starts to buy his own line. It's weirdly like government prescribed pick up raps.

Mainly the cgi is in the action scenes, though it's also used for some jewellery--mainly it's for intricately detailed wardrobe, and I did sort of like this princess's crown; 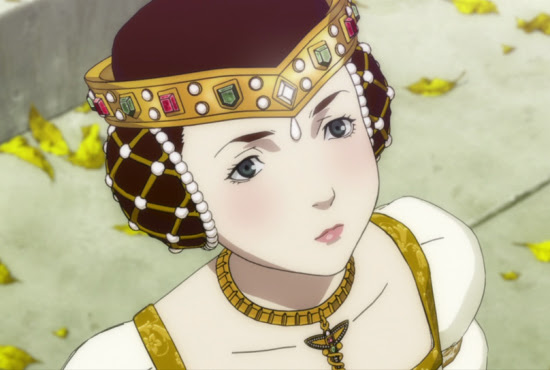 But mainly it leads to a jarring clash of kinds of motion. In some cases, the characters are drawn moving slowly in attempt to emulate the computer animation, which leads to things looking even more awkward. It ruins some otherwise decent designs.

The plot takes place in an alternate reality late medieval England, where the evil Tudors are trying to destroy another group of unnamed royals, the good guys. The lead character, presumably the berserk one, is named *sigh* Guts. Though he works out to not be terribly berserk when during a key assassination he's inexplicably taken aback by some bloodshed. Well, it's inexplicable until we see that it's cumbersomely contrived to push along some central character conflict.