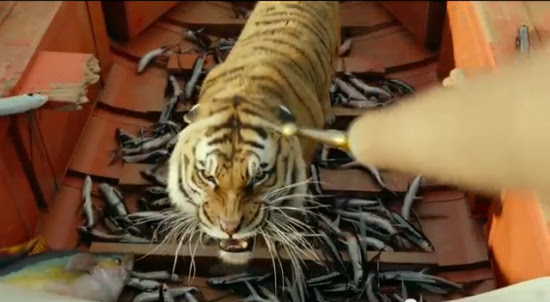 Sometimes the pudding is much better than the supposed proof. This is the case with Ang Lee's Life of Pi, based on a book which Barack Obama called "an elegant proof of God." It's really not proof of God's existence--in fact, it's actually much easier to use the story the film presents to disprove God's existence. But it is elegant, in fact beautiful, a breathtaking poetic construction of insight, which is far better than proving anything. As Oscar Wilde said, "No artist desires to prove anything. Even things that are true can be proved."

The first portion of the movie is about young Pi's life growing up in India, where his father runs a zoo. Pi is abnormally drawn to all the religions that have places in his home town--Hinduism, Christianity, and Islam. His father encourages him to study the principles of secular reasoning instead of flitting from one complex spiritual impression of the universe to another. He doesn't sympathise with the fact that Pi isn't so much trying to figure out how the world works as he is studying the beauty of its aesthetic variety in its various digestions through stories. As he says at one point in voice over narration as we watch his younger self reading a comic book about Hanuman, the Hindu gods were his superheroes.

But his father does impress upon him the importance of respecting empirical reality in a lesson that defines the thematic problems the movie works with throughout its length. Pi, having nearly had his arm bitten off in an attempt to feed the zoo's Bengal tiger named Richard Parker, has his father graphically demonstrate to him that the empathy Pi felt he shared, looking into the tiger's eyes, is only a reflection of his own feelings. That the tiger has a personality very alien and different from Pi's--his father makes this clear to Pi by forcing the child to watch the tiger devour a live goat.

This lesson follows Pi once he's trapped alone with the tiger on a small lifeboat, lost at sea after the sinking of the Japanese freighter that was carrying him and his family to Canada. Pi barely has time to mourn the loss of his family when life quickly becomes about learning to live with a powerful, hungry tiger.

One of the movie's shortcomings is in that it relies on Pi to tell us so much in voice over narration, mainly that Richard Parker kept him alive by keeping him alert and requiring him to tend to the tiger's needs. This would have been better had it been demonstrated visually. The impact of Pi's relationship with the tiger largely functions on a kinetic level, like a good action movie. Though the cgi in this movie is particularly ineffective, especially since real tigers are used in several shots, making the cg tigers even less convincing by contrast. This film probably would have been better fully animated, maybe even computer animation.

And it's shot for 3d, though I saw it in 2d. I could see how in some shots the 3d would have enhanced the movie visually, particularly in the repeated shots of the tiny boat in the centre of the screen surrounded by water and/or sky, emphasising Pi's smallness in respect to the complex and dangerous reality around him. But shooting digitally for 3d has much more of a detrimental effect, as beautifully conceived shots of sunrises and water wind up looking cheap and artificial. There are parts of this movie that don't look much better than the old video game Myst. 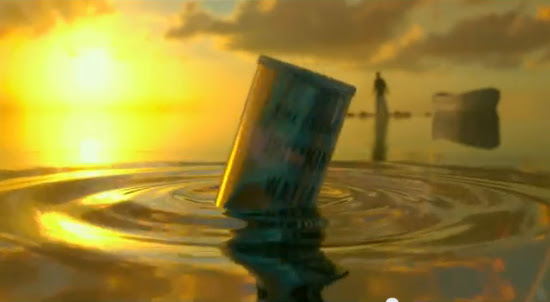 But at times I think there's a deliberate artifice to the look, especially in an amazing sequence where Pi encounters a carnivorous island populated by thousands of meerkats. He makes a bed in a tree, which is a good thing because as the sun sets he observes all the meerkats scrambling up into the trees and the tiger retreating back to the boat. He realises, after a fascinating moment where he finds a human tooth in a glowing flower and witnesses hundreds of fish skeletons floating up in the pool of freshwater he'd bathed in during the day that the whole island was some sort of Venus Fly Trap. It nourished animals by day to devour them by night. It's another thing that forces Pi to confront the hostile, ruthless instincts for survival that his father had demonstrated to him in his youth.

There's a much keener, more beautifully nuanced interplay between grace and nature than the broad dichotomy presented in last year's Tree of Life. Instead of Pi's father essentially being a villain, Life of Pi shows how pragmatic carnivores are integral to the overall grace of existence. Pi says that Richard Parker kept him alive by keeping him alert, but by the end of the film one might wonder if what Pi really meant was that the strangeness Richard Parker continually forced Pi to confront kept him from the fate his father feared for him when he explored every religion available to him, that believing in everything is ultimately the same as believing in nothing. It's far better to have a number with no foreseeable end.

Posted by Setsuled at 7:18 PM
Email ThisBlogThis!Share to TwitterShare to FacebookShare to Pinterest