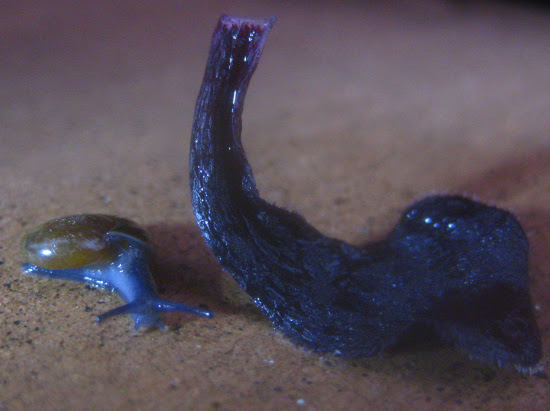 So now I can go back to reading Moby Dick. Yet I keep thinking about Washington Irving. I may post my term paper here in a couple days--not until after I get a grade, lest I'm accused of plagiarising from myself. But I'm not sure it makes for a very interesting read. The focus is on what makes American Literature American Literature. It's a bit of a "I'll tell you what Christmas is really all about, Charlie Brown." I say that despite really enjoying the Christmas stories in The Sketch Book of Geoffrey Crayon.

There is something I want to talk about. I was frustrated that I couldn't think of anything particularly new to saw about H.P. Lovecraft. Every time I had a line of thought about him, I'd find an article or analysis that already had the same thought. The Lovecraft section of my paper isn't a lot more than stringing together citations. I thought I really had something with the similarity of the cosmic dread Lovecraft evokes to the gloom and doom of the Puritan preacher Jonathan Edwards' sermon "Sinners in the Hands of an Angry God", but I saw Lovecraft himself, in his "Supernatural Horror in Fiction" essay credits the Puritan philosophical heritage as part of the wellspring of American horror. Oddly enough, I found a lot less written about Washington Irving who, having a hundred years on Lovecraft and being one of the first respected American authors, seems like he'd have a lot more material written about him. Maybe it's because so many people are busy trying to prove Lovecraft is noteworthy while Irving's taken for granted. Maybe the college library databases I was looking at just aren't that great.

Anyway, I noticed something about "The Legend of Sleepy Hollow" I can't find anyone else commenting on. It seems so obvious to me, I really don't think I could possibly be the first, but at this point I can't find anything else written about it.

"The Legend of Sleepy Hollow" was heavily influenced by Shakespeare's The Merry Wives of Windsor.

Most sources point to "The Legend of Sleepy Hollow"'s main influence as being The Wild Huntsman folk tales of Germany and Scandinavia. But aside from the Huntsman's obvious resemblance to The Headless Horseman and the fact that the stories are often cautionary tales where someone runs afoul of the Huntsman through carelessness, I can't find a story of the Huntsman that quite resembles "The Legend of Sleepy Hollow", most crucially in the lack of a character as strongly rendered as Ichabod Crane.

I titled my term paper "The American as Caliban or Falstaff" because I focused on the attempts by Lovecraft and Irving to assemble workable self-images based on relatively uniquely American pressures relating to the importance placed on self-sufficiency and mixed cultural identity. In reading The Sketch Book of Geoffrey Crayon, I think what we see is Irving trying to digest the extreme fear and depression he feels upon the bankruptcy of his family business (as evidenced in quotes from Irving's letters in various articles I read, where Irving talks of being "cast down" and "abased"). The sea voyage that opens The Sketch Book features the grim witnessing of a shipwreck followed by "Roscoe" and "The Wife" which both directly dwell on the subject of bankruptcy. It's around halfway through the collection, beginning with, I think, "Boar's Head Tavern", where Irving starts on his obsession with Falstaff, in that Crayon attempts to actually track down the inn which Falstaff frequented. At the same time, an obsession emerges with inns or the squire's manor house, places where rich and poor could come together and food, companionship, and shelter were implicitly taken as human rights.

What have the heroes of yore done for me or men like me? They have conquered countries of which I do not enjoy an acre, or they have gained laurels of which I do not inherit a leaf, or they have furnished examples of hair-brained prowess, which I have neither the opportunity nor the inclination to follow. But, old Jack Falstaff! kind Jack Falstaff! sweet Jack Falstaff! has enlarged the boundaries of human enjoyment; he has added vast regions of wit and good-humour, in which the poorest man may revel, and has bequeathed a never-failing inheritance of jolly laughter, to make mankind merrier and better to the latest posterity.

In "Stratford-on-Avon", Irving talks about an incident in Shakespeare's youth where he poached deer and how it was likely the inspiration for Falstaff's deer poaching at the beginning of The Merry Wives of Windsor. So Irving, feeling intense shame and unhappiness at his impending poverty as well as, as someone who considered himself a gentleman, a discomfort with the very preoccupation of finances, fixates on Falstaff, a knight who lives on the edge of poverty, resorting to manipulation and theft, and yet who's beloved, not only by the characters in the plays but by audiences. Falstaff is seen by Irving as a key to his own redemption.

Falstaff becomes the prototype for both Rip Van Winkle and Ichabod Crane--the one slothful and the other gluttonous and avaricious. Crane, as he heads off for the Van Tassel party near the end, is described;

That he might make his appearance before his mistress in the true style of a cavalier, he borrowed a horse from the farmer with whom he was domiciliated, a choleric old Dutchman of the name of Hans Van Ripper, and, thus gallantly mounted, issued forth like a knight-errant in quest of adventures. But it is meet I should, in the true spirit of romantic story, give some account of the looks and equipments of my hero and his steed. The animal he bestrode was a broken-down plough-horse that had outlived almost everything but his viciousness. He was gaunt and shagged, with a ewe neck and a head like a hammer; his rusty mane and tail were tangled and knotted with burrs; one eye had lost its pupil and was glaring and spectral, but the other had the gleam of a genuine devil in it. Still, he must have had fire and mettle in his day, if we may judge from the name he bore of Gunpowder.

One could say the reference here is to Don Quixote, except Ichabod's intentions to gain Katrina and her fortune are far closer to something Falstaff would try.

Then consider the climactic scene of The Merry Wives of Windsor--Falstaff is tricked into appearing by a famous oak in the guise of Herne the Hunter--a supernatural figure from folklore likely inspired by none other than the same Wild Huntsman (who at one time was none other than Odin). The wives, husbands, Mistress Quickly and several of the town's children then disguised as dangerous faeries terrorise Falstaff, much as Brom Bones does in the guise of the Headless Horseman. Brom Bones does it as a competitor for the hand of Katrina, and perhaps indirectly (certainly thematically) punishing Crane for courting the woman with such material motives. The Merry Wives of Windsor is all about honour in marriage--Falstaff is being punished for trying to seduce two married women at once.

I really can't be the first person to notice this.

Posted by Setsuled at 5:18 PM
Email ThisBlogThis!Share to TwitterShare to FacebookShare to Pinterest