Handing It to the Shadow 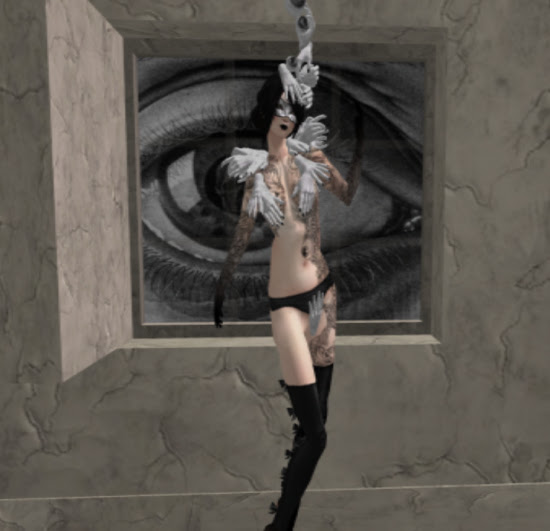 My avatar won a costume contest at an M.C. Escher party last night. I got the outfit from Vita's Boudoir, as usual, though I added a hand to the crotch in honour of the one David Bowie couldn't wear for this performance;

This web site quotes Bowie from a 2002 interview talking about the outfit;

I did one particular song, can't remember what it was now but I had a strange kind of string knitted costume made with three hands on. Two of them on my chest, looking like I was being gripped from the back...And a third one on my crotch. I nearly started a riot with the Americans. They said: "Oh we can't show that, that's subversive." We went through hell, so I had to take the hand off my crotch. And then of course they didn't like the black pouch piece that was down there, that the hand was stitched to...so I had to change all that. So, like the 'Diamond Dogs' thing that they airbrushed the dick off, I was having more erasure problems. It followed me all through the Seventies. It's funny that I can remember the costume and not the song, totally indicative of what the time was like.

Bowie has a new song, by the way. Or it was new a couple weeks ago, anyway;

Howard Stern complained he preferred it when Bowie "rocks". I don't consider this one of Bowie's stronger works, but I do like it. It reminds me somewhat of "Thursday's Child", though it's more of a rumination of a state than the sort of revelation quality "Thursday's Child" has. "Thursday's Child" seemed to be, at least in part, about someone discovering who and what he is, sort of suddenly, having to do with his age. I remember hearing Bowie talking about how it was more about the relationships of people he knew that were falling apart rather than his own relationship with Iman. But I can see how he might have identified with the subject matter as part of his preoccupation with aging. This new song reminds me of some Morrissey's newer stuff, which also tends to focus on sort of aimlessly wandering about continental European cities, notably not the countries where either artist grew up, yet countries where both have spent a lot of time in their adult life. It seems sort of like reflections on what this strange world is they've built for themselves, projects that began with the independent striking out from the people or places of their youths or familiar cliques, but have grown into a permanent sense of place. "Where Are We Now", the title of the song, emphasises that there's a sense that sooner or later one gets to the point where one realises moving house or reinventing oneself will never satisfy the need that prompted those actions in the first place and there's an insubstantial, alien reality we're always stuck with.

I'm behind now on four movies I want to talk about. I also watched Groundhog Day again on Friday, for Groundhog Day, of course, like I guess a lot of people do. That movie never seems to get old. I see on the Wikipedia entry that it's ranked among the greatest screenplays ever written, and it is a remarkably perfect bit of writing and acting. Though credit goes to Harold Ramis as well because I recall from the commentary he actually made a lot of big changes to the screenplay.

Last night was the best night's sleep I got in about week yet I feel more tired to-day. Hopefully coffee will fix that . . .

Posted by Setsuled at 1:30 PM
Email ThisBlogThis!Share to TwitterShare to FacebookShare to Pinterest