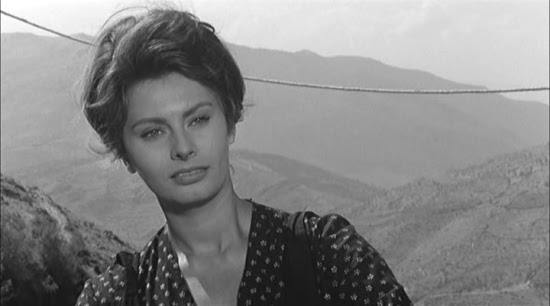 I think I may be fated never to see a Sophia Loren movie I wholly like. She's very beautiful and a good actress, but so far all her movies I've seen have only been, at best, superficially entertaining. Or, they're simply quite bad, like 1960's La Ciociara (called Two Women in English). This unfocused tale is a distractingly glossed attempt at a hard look at life for common citizens in Italy during World War II. The lack of realism in the film is particularly striking in that it was directed by Vittorio De Sica, director of the great Neorealist film Bicycle Thieves.

Comparing the two films illustrates a lot of what's wrong with La Ciociara. Both films are related to the difficulty ordinary citizens faced in Italy thanks to World War II, both begin in Rome. Bicycle Thieves stars a man who was not an actor, De Sica cast Lamberto Maggiorani in the lead role for his rough, ordinary features. Sophia Loren, meanwhile, isn't just beautiful, she has the hair, makeup and wardrobe of a movie star. 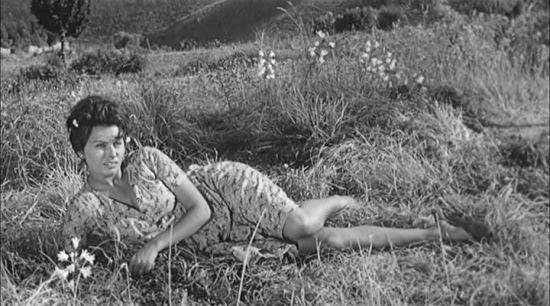 Bicycle Thieves deals with a small scale story, one man's desperate search for his bicycle, without which he can't continue to work. La Ciociara is about a woman and her daughter fleeing from the regular bombings in Rome to an idyllic Italian countryside, where they're warmly greeted by the picture of a traditional large Italian family. 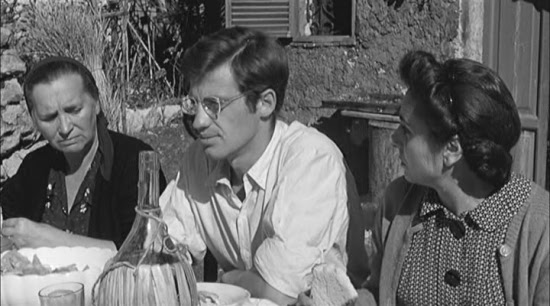 Among whom is Jean-Paul Belmondo, looking rather diminished behind glasses and another unfortunate comparison is set up, as his clichéd awkward flirtations with Loren contrast with the insightful and exciting dialogue in Goddard's Breathless.

I'm not saying a war movie has to be realistic to tell a good and insightful story. But realism is what De Sica was good at, and when he tries to tackle issues like war and rape, his treatment feels frustratingly trite when it's so conservatively constructed. 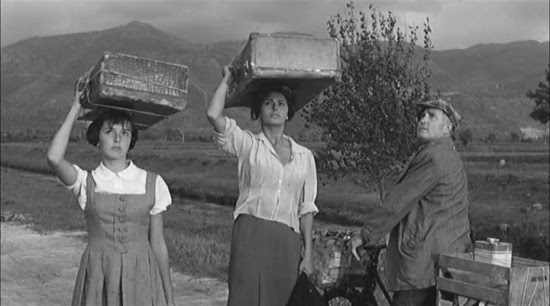 Most of the film feels like a mild road comedy, with Loren as a tough talking dame always sought by the men around her leading her shy and serious young daughter about, who works at times as something like a comedic foil. The character herself is always fairly two dimensional, existing just to blush and scream when Belmondo accidentally sees her bathing or to ask her mother questions.

The broad characterisations of these two become really problematical when they're gang raped by Moroccan soldiers around fifteen minutes before the end of the film. It's sort of like seeing an episode of I Love Lucy where Lucy and Little Ricky are gang raped, except in I Love Lucy one might expect to spend more time with the characters afterwards to see the psychological impact. Here, the straight laced young girl, who was always shy of boys, deals with the experience by immediately running off with a boy, coming off as a hazy conception a religious Catholic male writer might have of the effect of sexual assault on the mind of a girl. None of this is helped by the fact that Eleonora Brown, who was twelve at the time, delivers a flat, essentially typical child actor performance. 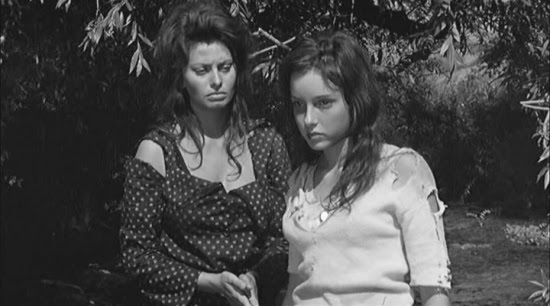 Hair, clothing, and makeup on the actresses after they've been assaulted looks more like they've participated in a fight scene on Star Trek. One could say that this is a product of the time. Japanese cinema seemed able to portray rape without burdening it with awkwardness in films like Rashomon and Life Of Oharu, but western cinema seemed to have trouble approaching the subject without a great deal of awkwardness. I think the oldest western film I can think of that approaches the subject with any kind of intelligence is 1948's Johnny Belinda, but for the most part the 1950s saw few films in the west that even directly mention the subject, which may explain why it's handled so clumsily in La Ciociara.