Remember Him, He was One of Us, in Fact He was Our Clone 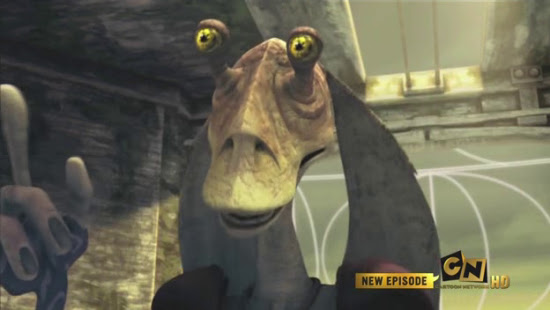 Question: What's worse than Jar Jar Binks? Answer: Jar Jar Binks with bagpipes. Yes, for some reason in the Star Wars: Clone Wars series, it was apparently decided that Jar Jar's astonishingly consistently flat slapstick would be accompanied by vigorously played bagpipe music in the background. I discovered this last night when I got to the eighth episode of the first season, which is actually centred on Jar Jar. However, I'd found myself really digging the episodes preceding it.

Tim had been recommending the show to me for a while but it wasn't until a couple weeks ago I really started to get into it. I'd watched the pilot movie and the first episode--a stand-alone story about Yoda--years ago and had neglected the rest. Then I compulsively watched three episodes in one night. These were connected episodes, and the show plays delightfully like a serial. 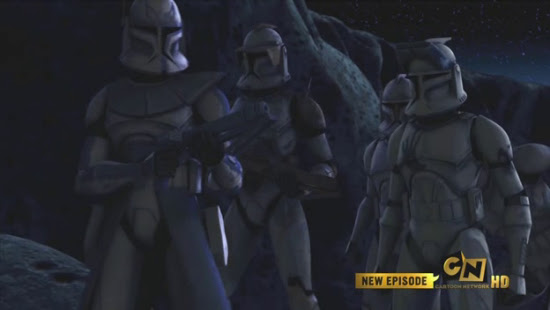 But the writing is engaging for other reasons, too. I really liked a more or less stand alone episode about some rookie clones guarding a small base from Separatist droids. The characters are broadly constructed with a blatant appeal to emotions as one of the clones sacrifices himself for the good of his fellows. It feels so much like propaganda--not unlike Battleship Potemkin--it adds a wonderful nuance to the fact that the clones eventually turn on the Jedi they protect with such noble gestures. It becomes almost a commentary on propaganda itself by acknowledging the validity of sympathies from the audience for characters in propaganda. It makes me hope to see that post-Episode III series get off the ground. I'd love to see stories about how these same clones act and feel after they've turned. 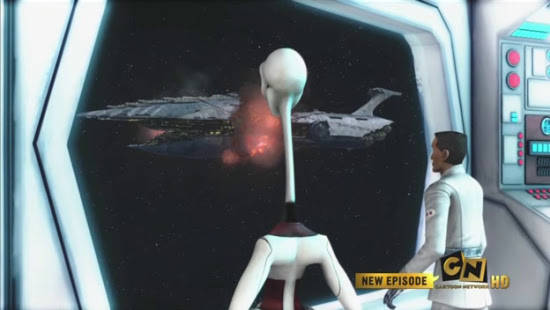 My favourite episode so far, though, was one where Anakin leads a fighter attack on General Grievous' ship in order to protect a medical station. It reminded me so much of playing X-Wing and TIE Fighter. I really need to get another joy stick.

Elephantine phones know too much about
Townhouses where stoic marble reflects
Twists of blue whale crayons arming the rout
Of the double Hallmark cardboard insects.
Cavernous notions slide feathers of wit
Through the thimble drain in separate stinking
Streams of yellow hue and by red flame lit
As they were oil through a sieve sinking.
Drum rolls of the daydreamed camel stairway
Retract rare coats from high school reunion
Fog machines which glimmer with a risqué
Sheath of a restitched pink Ringwald bullion.
Weather unchosen chastised wilful shade
Scratching calendars in plastic glade.