What to Do at the Dome 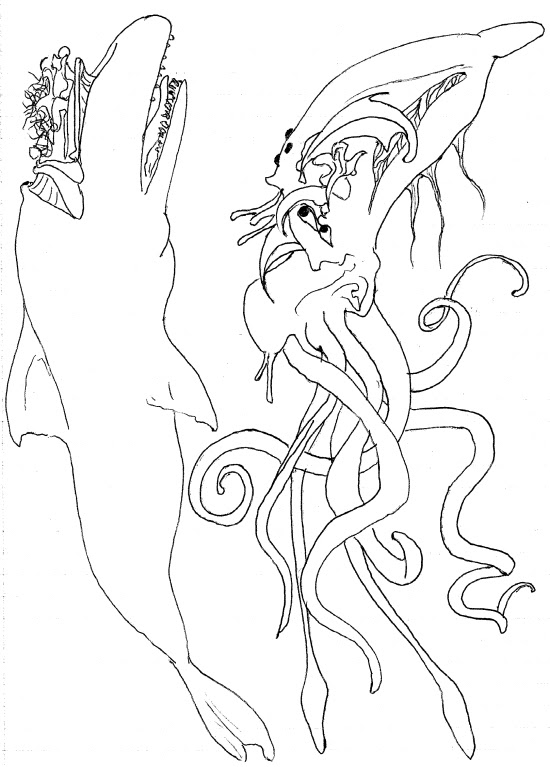 I drew this before class to-day. I think it's some sort of squid building a whale decoy. Your guess is as good as mine. I started on those whale brain works, just making shapes before I decided it was going to be anything. Seems like there's more personality in that whale than would be in a decoy. Well, it is what it is, whatever . . . it is.

In British Literature class to-day I heard a long analysis, in a video from what looked like a PBS broadcast from the 80s, of Samuel Taylor Coleridge's "Kubla Khan" that somehow did not mention sex. I don't even see much sex in the text book's analysis or Wikipedia's. But the whole thing seems to me an obsessed thread of dream logic about sex, though I'm not sure I believe the story Coleridge put forth about the poem coming from a dream. I suspect the story about it coming from a dream was simply to divert criticism of vulgarity, which fits with the fact that he published the poem more than a decade after he wrote it, the fact that he was criticised for a lack of moral in "The Rime of the Ancient Mariner" (he, rightly, argued in response that it actually has almost too much moral), and the fact that it was Lord Byron who finally convinced him to publish it.

Am I crazy? Too much sex on my brain? Let's look at it.

In Xanadu did Kubla Khan
A stately pleasure-dome decree:
Where Alph, the sacred river, ran
Through caverns measureless to man
Down to a sunless sea.
So twice five miles of fertile ground
With walls and towers were girdled round:
And here were gardens bright with sinuous rills,
Where blossomed many an incense-bearing tree;
And here were forests ancient as the hills,
Enfolding sunny spots of greenery.

But oh! that deep romantic chasm which slanted
Down the green hill athwart a cedarn cover!
A savage place! as holy and enchanted
As e'er beneath a waning moon was haunted
By woman wailing for her demon-lover!
And from this chasm, with ceaseless turmoil seething,
As if this earth in fast thick pants were breathing,
A mighty fountain momently was forced:
Amid whose swift half-intermitted burst
Huge fragments vaulted like rebounding hail,
Or chaffy grain beneath the thresher's flail:
And 'mid these dancing rocks at once and ever
It flung up momently the sacred river.
Five miles meandering with a mazy motion
Through wood and dale the sacred river ran,
Then reached the caverns measureless to man,
And sank in tumult to a lifeless ocean:
And 'mid this tumult Kubla heard from far
Ancestral voices prophesying war!

The shadow of the dome of pleasure
Floated midway on the waves;
Where was heard the mingled measure
From the fountain and the caves.
It was a miracle of rare device,
A sunny pleasure-dome with caves of ice!

A damsel with a dulcimer
In a vision once I saw:
It was an Abyssinian maid,
And on her dulcimer she played,
Singing of Mount Abora.
Could I revive within me.
Her symphony and song,
To such a deep delight 'twould win me,
That with music loud and long,
I would build that dome in air,
That sunny dome! those caves of ice!
And all who heard should see them there,
And all should cry, Beware! Beware!
His flashing eyes, his floating hair!
Weave a circle round him thrice,
And close your eyes with holy dread,
For he on honey-dew hath fed,
And drunk the milk of Paradise.

The analysis I heard focused on Coleridge's philosophy about two concepts he sees employed by poets--imagination and fancy. Imagination, in Coleridge view, is the more creative element, that crafts the shape of the story or idea while fancy draws in strange and not necessarily immediately symbolic elements like, he quotes a line from the poet Thomas Otway, "Lutes, lobsters, seas of milk, and ships of amber." According to the guy in the video, the first stanza of "Kubla Khan" is meant to show how fancy is a mechanical element that confines the creative powers of imagination. The analysis generally put forward the idea that the poem is about poetry itself, and the guy confessed puzzlement at what he saw as a violent and troubling second stanza.

First of all, I think a lot of Coleridge's critical writing is really insightful. Particularly in his idea that poetry is composed of discordant elements ("of sameness, with difference; of the general, with the concrete; the idea, with the image; the individual, with the representative; the sense of novelty and freshness, with old and familiar objects; a more than usual state of emotion, with more than usual order . . ."). It's a more refined version of Wordsworth's concept that we should present the familiar in a way that's surprising. Coleridge, of course, surpasses Wordsworth in knowing this need not exclude the supernatural or, the indeed, fanciful. Which is exactly what's wrong with the video's analysis--Coleridge very obviously didn't see anything wrong with the fanciful, just that it was an element different and perhaps opposite to what he called imagination. The argument doesn't hold, that the poet who thought fancy destructively mechanical would write poems about singing zombies and lesbian witches.

Though I don't think Coleridge's poetry was necessarily as strongly informed by his critical thought as some would think. And this maybe is where his laudanum addiction might come into play. I think he allowed inspiration to come through without the filter of his reason--this, I believe, would account for the contradiction of creating such a fascinating lesbian character while he expresses apparently homophobic sentiment in his Biographia Literaria.

"Kubla Khan" seems to me a perhaps unconscious attack on patriarchy, which would both exploit female sexuality while condemning it, and perhaps also the poem reflects Coleridge's fear and awe of sex.

I was rather surprised the analysis didn't mention the first thing that popped into my mind when thinking of a tyrant's "pleasure-dome"--namely, a harem. It's supported by the imagery, with a "sacred river" in "caverns measureless to man".

The lines "So twice five miles of fertile ground/With walls and towers were girdled round". Not ten miles, but twice five miles, which works with the alliteration but also helps the image of something bisected, as the river would seem to do. With the "fertile ground" the land conveyed seems to look more like a woman's body and "girdled round" suggests not only a garment but the fact that woman is contained by Kubla Khan's pleasure dome.

And we have "gardens bright with sinuous rills/Where blossomed many an incence-bearing tree". The Romantic idea of the human connexion to nature here seems like it's being used to describe women, and women as part of nature, contained within the tyrant's pleasure dome.

The second stanza, in contrast to the architectural, still quality of the first, is full of violence and seems to be about sex without empathy. The "romantic chasm" could be a vaginal image and also the pit of mental oblivion representing orgasm or the divide between sexual partners. It's a "savage place!" as well as "holy and enchanted", suggesting the finest qualities of nature used without concern. The "woman wailing for her demon-lover!" --I don't think I need say anything about that.

"A mighty fountain momently was forced:" could mean ejaculation and there's the line "chaffy grain beneath the thresher's flail"--seed actually being forced out by repeated physical action.

The "Ancestral voices prophesying war!" I would say is the idea that men who take sexual pleasure without compassion for their partner will see the world as made for conquest and violence.

The final stanza, about the maid with a dulcimer, is Coleridge presenting the alternative of women at liberty to create, and how much more beautiful it is when both partners have power in the love-making.

Anyway, here are a few more of my recent doodles; 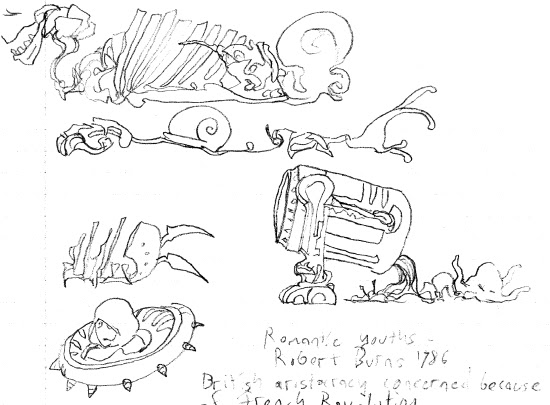 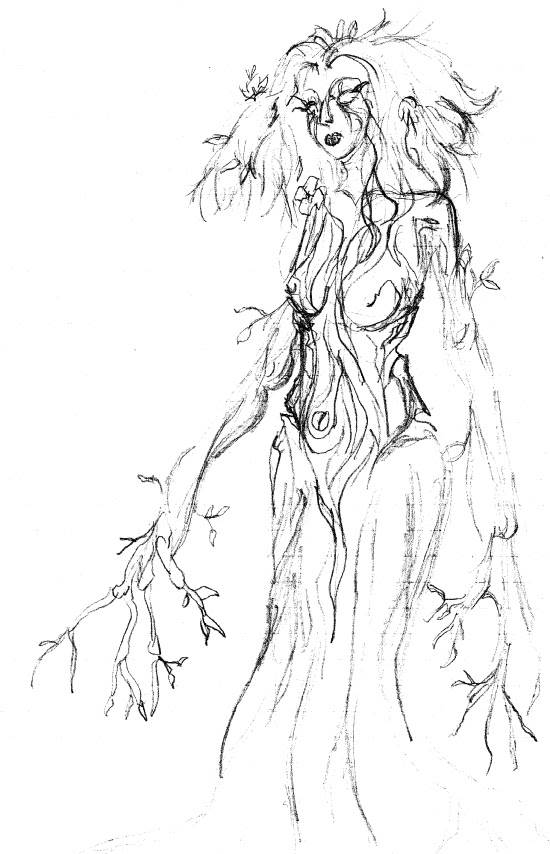 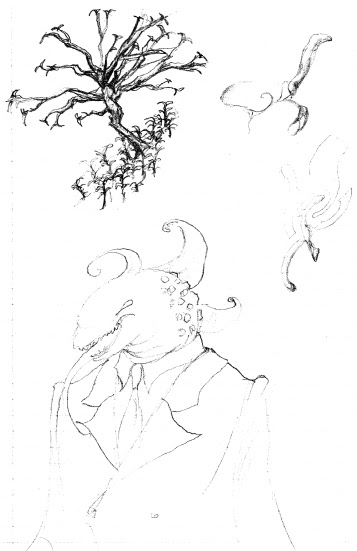