Dreams in the Box

I dreamt last night I was Kim Novak and in my backyard I had what might be called a backpack tree. It was an extremely large version of the backpack I have in waking life with a hole in the bottom and a large sequoia trunk going up through the middle of it, suspending it at least fifteen feet off the ground. Inside were enormous versions of various old things I own, not limited to the sorts of things I carry in the backpack--there was my sleeping bag I've had since I was twelve, lots of papers including a stack of manila folders with the cellophane still on, and socks. I needed to get something out of the backpack tree, so I climbed up the trunk and was searching inside when I found a nest with three enormous baby birds with sparse, spiky black plumage and glittering green eyes that all stared at me from the darkness of the backpack tree. I decided I was going to take the birds as pets--I was going to name them Jimmy, Scottie, and Johnny. I somehow knocked down the tree and brought the backpack inside. It occurred to me afterwards I might have injured the birds, but when I searched through the bag with a flashlight I could find no trace of them.

I didn't watch a movie last night, just a lot of television. I watched the final two episodes of Game of Thrones' third season. Not quite as impressive as season two but still quite good. Daenerys taking over the army of slaves relied on her opponent being improbably stupid but it was still a rather satisfying moment. I didn't really care about Theon Greyjoy from the beginning of the series but I came to really despise him as he bored me, whining through dull scenes where he's tortured by a stock psychopath character. I hate all the Greyjoys--the whole section from season two where Theon goes back to them, I was annoyed by what a whiney bitch he was and I was annoyed by his sister and father smugly mocking him. I really hope to see Daenerys kill all the Greyjoys. The White Walkers could kill them, too, that would be fun. Either one of those would be more entertaining than the boring torture guy. This may be a reflection of how jaded I am, I get the feeling viewers were supposed to be kept occupied in those scenes by the novelty of medieval torture portrayed on screen.

It was disappointing Tyrion had a less proactive role to play this season and a lot of the stuff between him and his father felt redundant--how many times can Tyrion act surprised when his father tells him he's ashamed of him? I get the feeling this may be one of the drawbacks of adapting novels for a television series--there's pressure to give a lot of the characters plenty of screen time even if they don't appear in the books for many chapters so the writers have to tread water with them a little bit. On the whole, though, I'm still very excited about this format. I love how organic the character arcs feel. Standard television character development feels really stilted by comparison--Game of Thrones has brought a virtue of the novel to television I didn't expect ever to see. One of my favourites is Arya Stark's story. Her progression from Eddard Stark's little tomboy to death worshipping, lost teenager works really nicely. I love how everywhere she goes, everyone seems to die or meet with disaster and her personality development as a result of it is nicely complimented by her actress' physical maturation. A lot of the child actors on the show began season one as twelve and thirteen year olds and are now fifteen or sixteen. It must be a strange way to grow up. 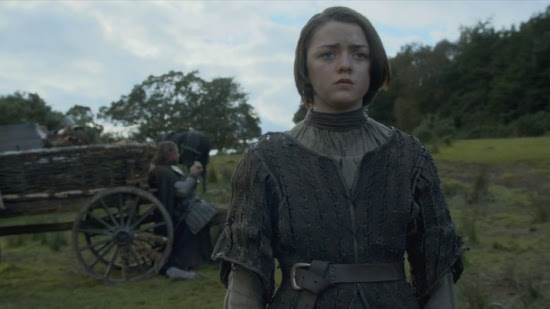 The Red Wedding sequence was terrific, especially since the Starks were generally pretty dull next to the Lannister and Targaryen plotlines. David Bradley is pretty delightfully disgusting as Walder Frey, but I kept looking at him thinking about how he's playing William Hartnell in An Adventure in Space and Time, an upcoming special about the making of Doctor Who for the show's 50th anniversary. He does actually kind of look like William Hartnell. 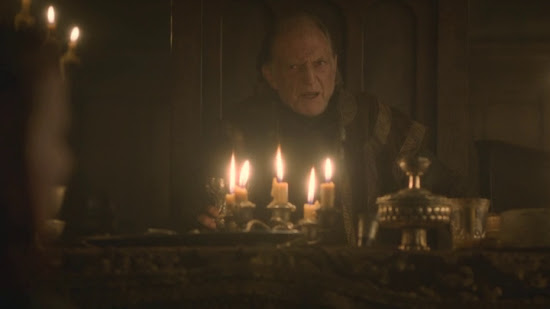 Part of me wonders if An Adventure in Space and Time isn't a big ruse, like Blue Harvest for Return of the Jedi. Maybe the sets constructed and actors cast in the name of An Adventure in Space and Time are secretly part of the real anniversary special's production and they've cast another actor for the First Doctor, just as was done for the twentieth anniversary special. That would be kind of nice. I'm hoping all the lies Steven Moffat claims he's telling about the special are concealing very cool things.

Also last night, I watched "Forest of the Dead", the second half of the Tenth Doctor two parter Moffat wrote, the story that first introduced River Song. It all takes on a new meaning after one's seen River's whole story during the Eleventh Doctor's run. The quality of the Tenth Doctor story actually seems to be diminished somewhat by knowing how weakly developed River turned out. The strangeness of her familiarity with the Doctor in that first story was actually rather endearing when I first saw it but it became pretty tired in subsequent episodes as she never seemed to move past that square. Moffat's much better at writing meet-cutes than he is at writing relationships, I think. Maybe that's not surprising as his chief virtue seems to be in constructing disconcerting, often pleasantly surprising, plotlines.

After that, I watched the first part of Pyramids of Mars and went to bed. Tom Baker and Elisabeth Sladen have really great chemistry in that story, I enjoy it a lot more every time I watch it.

Posted by Setsuled at 2:00 PM
Email ThisBlogThis!Share to TwitterShare to FacebookShare to Pinterest