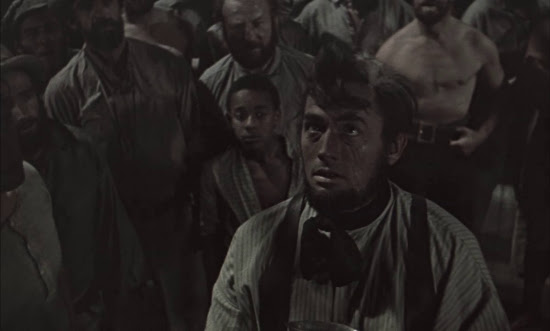 Among several inaccuracies in the Wikipedia entry for Herman Melville's novel, Moby-Dick, is its identification of the book as an example of Romanticism. Moby-Dick is a Gothic novel and like Melville's other works, and those of Poe and Hawthorne, it is in many ways a reaction against Romanticism. Captain Ahab is a parody of the Byronic hero.

But Wikipedia wouldn't be the first to categorise the story wrongly. Such a mistake is at the heart of why the 1956 adaptation doesn't work despite direction by John Huston and a screenplay by Ray Bradbury. 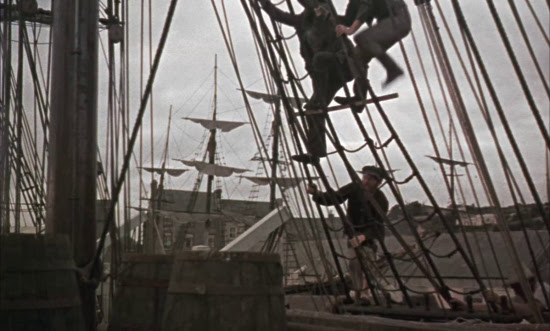 I thought Bradbury was a strange choice as screenwriter from the start. His best works depend on an underlying morality in the universe, people who are genuinely, fundamentally good or evil and Moby-Dick is an enthusiastically amoral work. In another unfortunate example of Wikipedia editing, the film's entry contains a section on what it says are the only four, very slight, differences between novel and film. The differences it lists are indeed differences between novel and film but they are neither slight nor by any means are they the only differences. 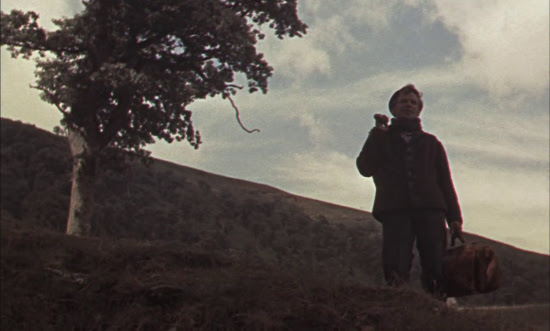 Naturally there would be a lot of changes made to fit such a famously long novel into a two hour film. Among changes not mentioned by the Wikipedia is a general streamlining of the narrative--Ishmael meets Stubb at the Inn and first sees Ahab on the street outside. The filmmakers still manage to keep Ahab's face hidden until over twenty minutes into the film--the Captain doesn't emerge from his cabin until the Pequod's been at sea for some time, just like in the book.

Queequeg is rather unfortunately portrayed by a fifty six year old, skinny Polish actor with a great deal more subservience than is ascribed to him in the book, though the way he follows Ishmael like a porter onto the Pequod may have been intended only as condensing.

I like the film's very beginning where Ishmael's description from the book of the pull of the sea is juxtaposed with Richard Baseheart as Ishmael walking beside creeks. 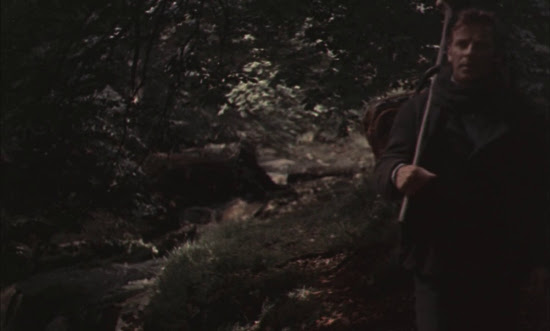 But after the first third of the film, it's no longer a story that bears much resemblance to the book. There are a lot of things Bradbury and Huston did possibly just in the name of streamlining that in fact exert an entirely different philosophy than the one presented in Melville's work.

Morality and Christianity are brought to the forefront much more. Early in the film, Orson Welles plays Father Mapple impressively and Huston gets some terrific shots of the bow/pulpit in a somewhat exaggerated version of what's described in the book; 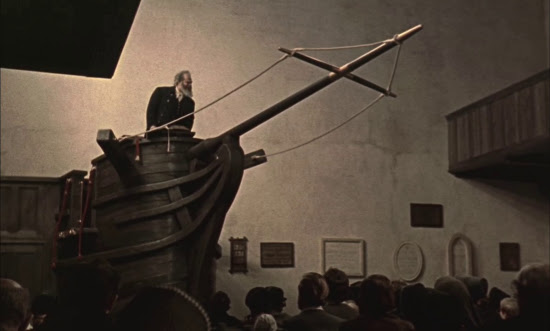 Welles' version of the sermon--supposedly Welles scripted this scene himself--is a short version of the one from the novel that retains its peculiar call to self-assertion.

"But oh! shipmates! on the starboard hand of every woe, there is a sure delight; and higher the top of that delight, than the bottom of the woe is deep. Is not the main-truck higher than the kelson is low? Delight is to him—a far, far upward, and inward delight—who against the proud gods and commodores of this earth, ever stands forth his own inexorable self. Delight is to him whose strong arms yet support him, when the ship of this base treacherous world has gone down beneath him. Delight is to him, who gives no quarter in the truth, and kills, burns, and destroys all sin though he pluck it out from under the robes of Senators and Judges. Delight,—top-gallant delight is to him, who acknowledges no law or lord, but the Lord his God, and is only a patriot to heaven. Delight is to him, whom all the waves of the billows of the seas of the boisterous mob can never shake from this sure Keel of the Ages. And eternal delight and deliciousness will be his, who coming to lay him down, can say with his final breath—O Father!—chiefly known to me by Thy rod—mortal or immortal, here I die. I have striven to be Thine, more than to be this world's, or mine own. Yet this is nothing: I leave eternity to Thee; for what is man that he should live out the lifetime of his God?"

Queequeg is shown refusing a bible offered to him in the movie, but in the book the pagan's character is juxtaposed with Christianity a little more markedly, as this description of him immediately follows the sermon;

Savage though he was, and hideously marred about the face—at least to my taste—his countenance yet had a something in it which was by no means disagreeable. You cannot hide the soul. Through all his unearthly tattooings, I thought I saw the traces of a simple honest heart; and in his large, deep eyes, fiery black and bold, there seemed tokens of a spirit that would dare a thousand devils. And besides all this, there was a certain lofty bearing about the Pagan, which even his uncouthness could not altogether maim. He looked like a man who had never cringed and never had had a creditor. Whether it was, too, that his head being shaved, his forehead was drawn out in freer and brighter relief, and looked more expansive than it otherwise would, this I will not venture to decide; but certain it was his head was phrenologically an excellent one. It may seem ridiculous, but it reminded me of General Washington's head, as seen in the popular busts of him. It had the same long regularly graded retreating slope from above the brows, which were likewise very projecting, like two long promontories thickly wooded on top. Queequeg was George Washington cannibalistically developed.

One of the changes made at the end of the film--one of the few noted by Wikipedia--is Starbuck suddenly zealously pursuing Moby-Dick after Ahab's failure. The reason for this wasn't hard to see as another of the differences in the film was to give Starbuck a more strongly dissenting voice in Ahab's pursuit of the whale and to tie it conspicuously with Starbuck's religion. Starbuck continually remarks on how Ahab's behaviour isn't Christian. So Huston or Bradbury needed an explanation as to why Starbuck is damned along with the rest of the crew. 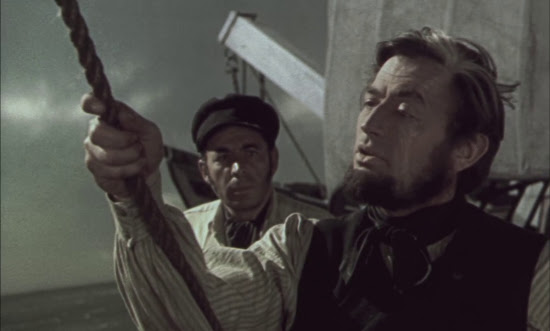 Unlike in the book, Ahab prevents the crew from taking other whales in order to get Moby-Dick. Again, this was probably done in the interest of streamlining but the crew's compliance is given a somewhat magical quality because of it. 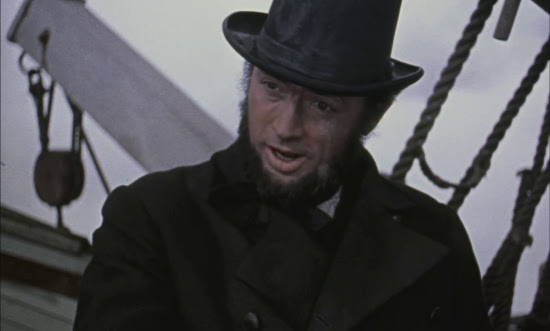 The characterisation of Ahab in the movie is a big problem. Gregory Peck was unhappy with his own performance in the role, I didn't think he was so bad, though my friend Ada mentioned that Klaus Kinski would have been better suited to it and I couldn't agree more. But the main problem is that the filmmakers were too much in awe of Ahab. The movie lacked some of Ahab's more humiliating episodes involving his false leg, as when he attempts to climb aboard the Samuel Enderby.

But here a curious difficulty presented itself. In the excitement of the moment, Ahab had forgotten that since the loss of his leg he had never once stepped on board of any vessel at sea but his own, and then it was always by an ingenious and very handy mechanical contrivance peculiar to the Pequod, and a thing not to be rigged and shipped in any other vessel at a moment's warning. Now, it is no very easy matter for anybody—except those who are almost hourly used to it, like whalemen—to clamber up a ship's side from a boat on the open sea; for the great swells now lift the boat high up towards the bulwarks, and then instantaneously drop it half way down to the kelson. So, deprived of one leg, and the strange ship of course being altogether unsupplied with the kindly invention, Ahab now found himself abjectly reduced to a clumsy landsman again; hopelessly eyeing the uncertain changeful height he could hardly hope to attain.

This is one of a number of jabs Melville takes at the Romantic, Byronic hero. Moby-Dick is much more realism than Romantic--instead of Manfred who can use magic to stand alone against heaven and hell, Ahab is a man in a world with a million realistic considerations that make heaven, hell, and his belief in himself absurdities. 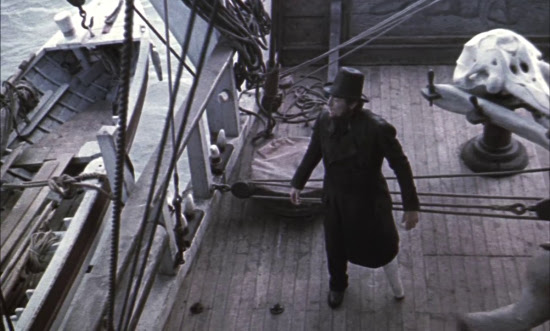 The white whale is the physical embodiment of horribly un-Romantic reality. A murderous, dangerous animal next to the unforgiving, lethal sea itself is the perfect foil for the Romantic notion of nature intrinsically offering spiritual salvation, redemption, and comfort. The whale is portrayed by not wholly ineffective models in the film. 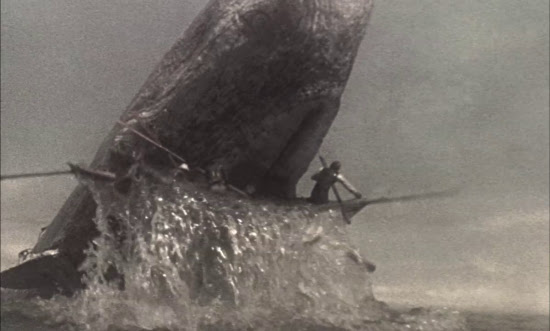 Some of you who've only seen the film in its pan-and-scan, overly saturated televised versions may be surprised by the muted colours of these screenshots. This is actually how the movie was meant to look--despite conventional ideas in the U.S. of how Technicolor ought to look, John Huston rather boldly experimented with subtler palettes in films like this, his 1952 film Moulin Rouge, and his 1967 film Reflections of a Golden Eye, the entirety of which he tinted yellow.