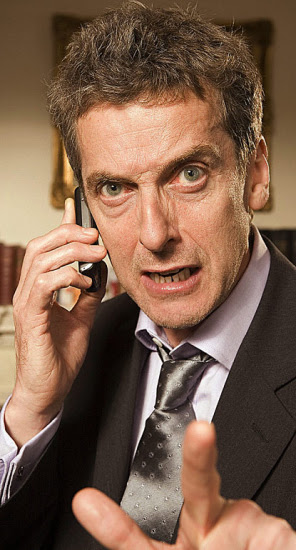 So the Twelfth Doctor already has a Wikipedia page of course. Here's a reliable quote from Wikipedia, if ever there was one;

You get it, people? EXTENSIVE SPECULATION, undeniably!

The Twelfth Doctor, it was announced to-day, (and I have this from a number of sources, including the BBC) will be portrayed by Peter Capaldi (pictured). He comes with a pretty impressive background including an Academy Award (for directing a short film). The only thing I've seen him in was the Neverwhere miniseries where he played the angel Islington and that was so long ago I don't think I could form an opinion based on it. But, I will say, as nice as it would've been to see a female Doctor, I am glad to see that it is an older Doctor. At 55 years old, he'll be the oldest actor to play the Doctor since William Hartnell, the First Doctor, who was also 55 when he accepted the role (even Jon Pertwee was only 51). It's a bold move, casting this guy--you know the BBC must have been pushing for another handsome young man.

I wonder if they'll cast a beefy male companion to be a Harry Sullivan/Ian Chesterton type to handle any action scenes. Or maybe Madame Vastra and Jenny will travel with him permanently now to take that role. Then again, the Doctor hasn't really been involved in any vigorously physical stories in a very long time.

Yesterday I finished reading The Red Tree, Caitlín R. Kiernan's excellent novel from a few years ago. And to-day's August 4th, by complete coincidence, the last recorded date in the book which is written in diary form by its protagonist, Sarah Crowe--August 4, 2008, actually. This may have something to do with August 3rd 1995 being the day when Elizabeth Tillman Aldridge, a young woman with whom Caitlín was in love, committed suicide. Sarah Crowe also had a lover who committed suicide, Amanda, one of several details of Crowe's life that mirrors Caitlín's own, the book being, as she has often said, largely autobiography in fictionalised form. In fact, knowing as much about Caitlín as I do, it's difficult at times to parse the novel as a work from impressions of Caitlín I have from reading her blog.

One certainly fictional element is the eponymous Red Tree itself though, there again, Caitlín describes being inspired by a real tree she'd discovered in Rhode Island. This real world Red Tree has not provided any of the vivid episodes of supernatural encounter of the kind described in the book, at least none that Caitlín has publicly divulged.

Sarah Crowe, like Caitlín at the time she was writing the novel, has recently moved from Atlanta to Rhode Island. She takes up residence in a large, remote old house in proximity to the Red Tree about which she soon forms an obsession. Her foray into the house's cellar and discovery of a manuscript by someone else obsessed with the tree has the effective and pervasive menace of a point of view in an eerily, subtly sinister environment that recalls the best parts of The Case of Charles Dexter Ward, a novel by H.P. Lovecraft from whom Caitlín has frequently drawn inspiration.

The connexion between autobiography and Lovecraftian supernatural fantasy is in the latter's effectiveness at portraying the cosmic isolation of the former. The horrible cheat of an existence that denies a person's fundamental needs, the voicelessness of both the deceased lover and the invisible and insoluble forces that led to her death are given a suitably cold and frustratingly unknowable persona in the Red Tree. The supernatural here functions as a palette for the painting of enduring and waxing pain arising from a natural, irrepressible compulsion to find answers to or comfort for things which have none.

It's a brilliantly written novel which demonstrates how fantasy can be uniquely suited to explore human experience.