The Weight of Beauty 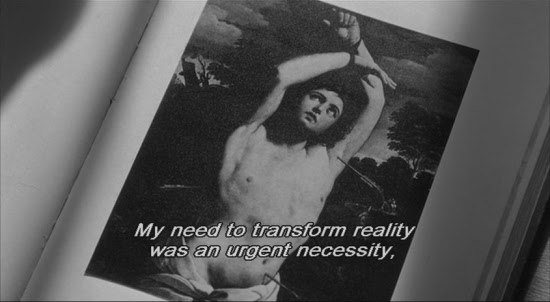 "My need to transform reality was an urgent necessity, as important as three meals a day or sleep," Yukio Mishima explains in voiceover narration as a scene depicts his younger self having his first experience of sexual arousal while viewing Guido Reni's painting of Saint Sebastian's martyrdom. This is from Paul Schrader's 1985 film Mishima: A Life in Four Chapters, a biopic of the famous author Yukio Mishima who committed seppuku in 1970 after a failed attempt to take over the Japanese military. The line quoted reflects everything at the centre of this extraordinary, brilliant film.

Paul Schrader is best known as the screenwriter for Martin Scorsese's Taxi Driver and Mishima has a great deal in common with Travis Bickle, the protagonist of the Scorsese film. Both are men with intense interior worlds, both "God's lonely man". 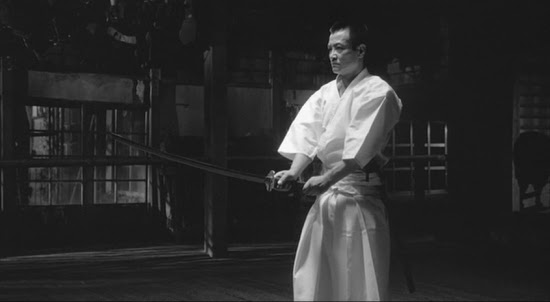 Mishima shifts between black and white depictions of the man's life as he grows up and intensely colourful, stage-bound renderings of some of his most famous novels. 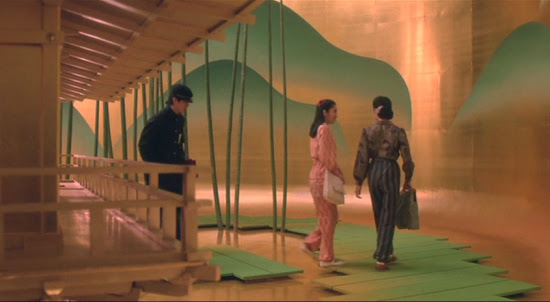 I was reminded of the dream sequences from Kurosawa's Kagemusha which used soundstages decorated to resemble the director's Expressionistic paintings for dreams. Kagemusha was produced by Francis Ford Coppola and George Lucas and so was Mishima.

In fact, despite being produced by Coppola's American studio, American Zoetrope, and directed by an American who could not speak Japanese, Mishima is set entirely in Japan with only one brief scene where any English is spoken. In its initial release, Roy Scheider provided narration in English but in the final version the narrator speaks Japanese, too. Yet the movie has never been made widely available in Japan due to the controversy surrounding Mishima. 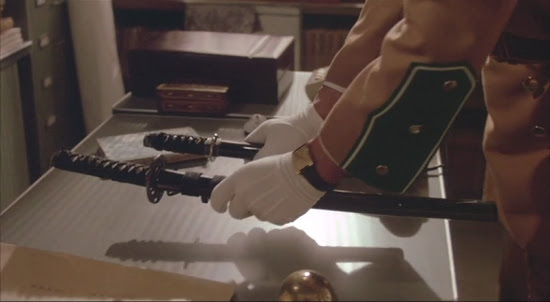 Mishima formed a private army that was allowed to train with Japan's real military and it was the affection military personnel had for him that allowed him and five of his officers to take a general hostage in the general's garrison office. Mishima, despite being apparently comfortable with his homosexuality, subscribed to an extreme rightwing philosophy. He and his followers wished to return Japan to a monarchy and restore the Emperor to power. 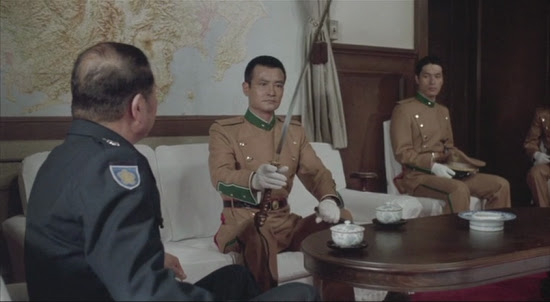 The movie does a remarkably sharp job of exploring Mishima's personality and the bedrock of his convictions and in so doing it explores how an artist's obsessions inform the subject matter of his or her work. 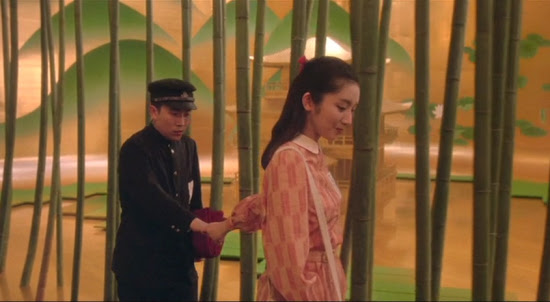 In the first story depicted, The Golden Pavilion, we see a young man afflicted with a stutter. He's a virgin, an aspect of his life which has seen him meeting various forms of rejection so that he comes to see sexual arousal and beauty of any sort to be so intense, so unapproachable that it must be destroyed. His symbol for this beauty is the Golden Pavilion.

His more worldly friend explains that "Beauty is like a rotten tooth. It rubs against your tongue, hurting, insisting on its own importance. Finally you go to a dentist and have it pulled. Then you look at the small bloody tooth in your hand and say, 'Is that all it was?'"

It could be said Mishima's whole life was dedicated to proving that beauty had an objective, paramount significance. 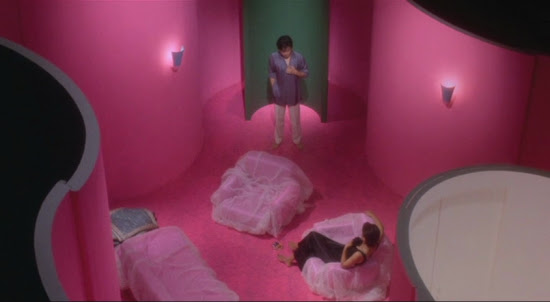 In the second tale, Kyoko's House, an attractive young man sells himself to a female yakuza boss in order to erase his mother's debt. Here Mishima ties the beauty of martyrdom with physical beauty, like the painting of Saint Sebastian he admired. One might also note the resemblance to his relationship with his grandmother as a child, who kept him from going outside, kept him from his mother, and forced him, in one early scene, to massage her legs.

As he grows older, Mishima grows more and more dissatisfied with his lack of direct participation in his stories. He refers to novels as the ultimate form of voyeurism and he wished to be more of an exhibitionist. So he begins posing as characters in his novels and publishing the photographs. After a lover deeply wounds his pride by calling his body flabby, he becomes a body builder, a model, and an actor. 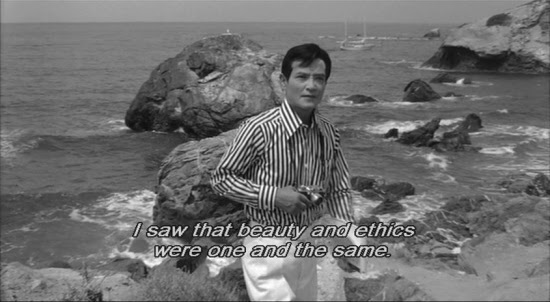 The final novel depicted is Runaway Horses about an attempted coup d'etat by a group of young man that ends with the leader committing ritual suicide. This leads to the culmination of Mishima's obsession with restructuring reality for his aesthetic and his attempted coup in real life.

It's interesting to see how, as with Travis Bickle, the reality of Mishima's experience doesn't precisely match up with what he desired yet it could be argued he ultimately accomplishes his goal. One can see the distress in Mishima as his speech to the soldiers after he's captured the general does not inflame their imagination, in fact they reject him. Whether or not his suicide fulfils his desire to finally destroy the golden pavilion is a question the film wisely leaves unanswered. 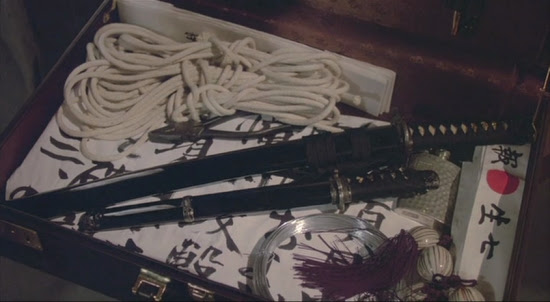