Galaxies Can't Always Look After Themselves 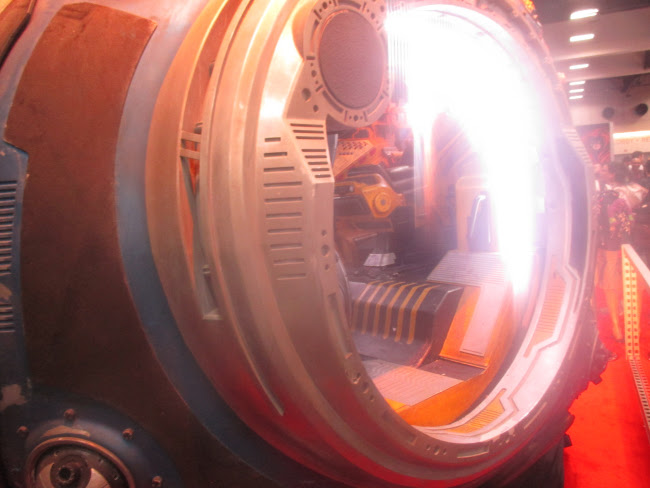 Here's a picture from my own lousy new camera of something at Comic Con that I've seen better pictures of on various web sites--one of the pods from Guardians of the Galaxy. People talked about the competition between Batman v Superman and Avengers 2 but it felt more like the battle for the hearts and minds of the Con was between the Zack Snyder film and Guardians of the Galaxy--a battle Guardians won so easily I don't think it's a reality most media sites are emotionally equipped to see.

The difference is simple--Batman v Superman gives people what Warner Brothers tells them they want, Guardians of the Galaxy looked like it's serving what people actually want, a creative, fun space adventure film about a group of imperfect friends whose hearts are in the right place. People might be drawn to visit the spectacle of a Superman film, but they want to live in Star Wars or Firefly. An it's that latter sort of thing Guardians of the Galaxy looked like it was, clearly drawing inspiration more from Star Wars than from the far more superhero oriented original comic.

They shut my water off again to-day so I caught an early matinee of the show--the first showing on a Monday but the theatre was packed anyway. I guarantee you won't see that with Batman v Superman.

And it's a good movie. Not as good as it very easily could have been, but as Science Fiction films with Zoe Saldana go, probably the best. And of course Zoe Saldana's in it, though as Gomora, the assassin love interest of protagonist Peter Quill (Chris Pratt), she turns into a dull figure of validation for the male hero--quite self consciously as one scene explicitly shows her taking the role of Peter's mother. Since Peter seems far more John Crichton than Star-Lord, it's a shame the film didn't take a cue from Farscape as far as female characters go.

That's what the movie reminded me of most strongly--Farscape with its fish out of water human lead character who continually makes Earth pop culture references to the comical consternation of his alien acquaintances. Peter seems slightly more impervious to emotional trauma than John Crichton, though, coming across as generally more shallow and childlike, something I think helped actual children in the audience connect with the movie better, though it ultimately makes his character more light weight.

But this is a movie that needs levity to counterbalance its worst quality which is a sentimentality that comes on like the clumsy lovestruck caress of a drunken sumo wrestler. One minute we're seeing how this is a group of badass escaped convicts, the next they're tearfully talking to each other about the value of friendship. I wish someone had pointed out to director James Gunn that Star Wars never had scenes like that but the idea of camaraderie came across anyway--and it came across a lot better. Mostly I think it comes from filmmakers sharing too much of their experiences as movie people holding hands and being vulnerable with each other rather than stretching their imaginations to find the truth in the people they're playing--basically, the problem here is vanity.

The best parts of the movie are Rocket Raccoon, voiced by Bradley Cooper, and Groot, voiced and performed for motion capture by Vin Diesel. Groot is only able to say, "I am Groot" though Rocket seems to be able to interpret this one sentence to mean a variety of things, much as Han Solo was able to understand a whole language in Chewbacca's growls. Rocket comes across as genuinely hard bitten and his resentment about a history of abuse and people treating him as an animal come across much more effectively than the psychic wounds of any of the other characters. Groot, aside from a lame scene involving fireflies, generally works very well coming from a "less is more" method. Diesel manages to bring across a subtle, contented benevolence in his voice work and his body language, and what the animators give him, aid in this a great deal too.

Another thing that really works for the film are the designs for the ships, planets, and alien worlds, the aesthetics of the technology unabashedly drawing from 2001: A Space Odyssey, Star Wars, and Final Fantasy, satisfyingly creating a feeling of a rough and tumble space opera world.