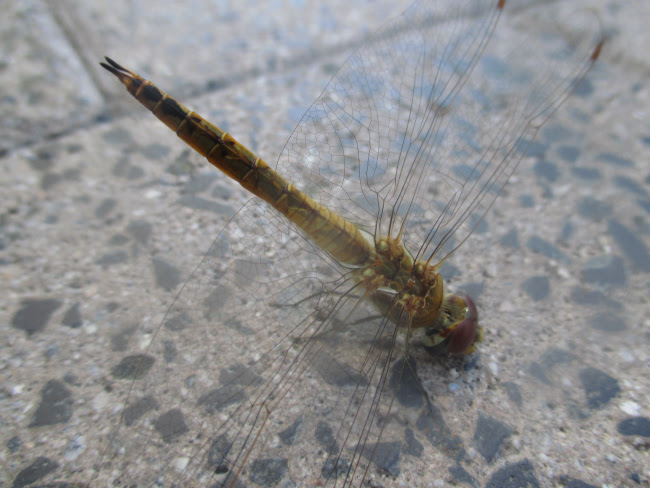 This is a dragonfly I saw crash landed at the mall about a week ago. Not sure what was wrong with him.

Looking through a bunch of photos on my camera from the past couple weeks, I guess it's been a while since I transferred them to my computer. Here's a lizard hiding behind the sign of the Mormon church. 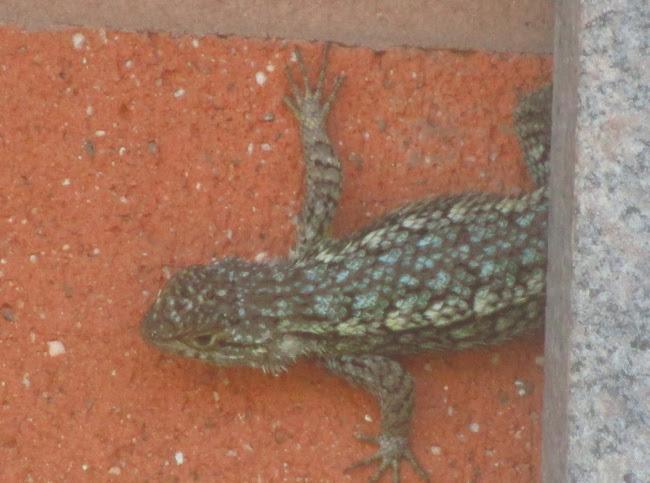 Probably best not to read into it. Though maybe I should since I just came from mythology class where I watched the video of Bill Moyers interviewing Joseph Campbell I'd first seen in high school almost twenty years ago. What struck me this time is how much of a struggle it seemed to be for Campbell not to say he didn't like Christianity much. Maybe he was just being polite to Moyers but his interpretation of the heaven and hell of Christian mythology being metaphors for inner states seemed pretty thin. He was so eager to talk about Buddhism and Hinduism which seemed to fit his conception of a philosophy that embraced nature and the incomprehensible so much better. The problem is the basic premise of the video is a little awkwardly misaligned. Here Joseph Campbell says all religions are telling you the same thing, and there Bill Moyers says, well, what can you do for Christianity then?

For my part, I agree with Campbell that myths, like any stories, have potential to be explored to valuable insight into human beings. But I'm not sure the similarities between all myths of the world are striking enough to regard as a great through-line of human existence. But I don't blame Campbell for that--his attempt to show mythology as a reflection of the human mind seems like it's been hijacked, primarily by Oprah Winfrey, as an argument for the existence of a supernatural world.

I didn't realise the "follow your bliss" line Winfrey always uses came from Campbell until to-day. I wish he hadn't used that word, bliss. "Follow your bliss" could be used to justify just about anything, from heroin abuse to unrestrained materialism.

I'm still at school now, in a little courtyard formed by the art buildings and a couple guys at the table next me sound like they're talking about role playing games, which reminds of this photo from my camera: 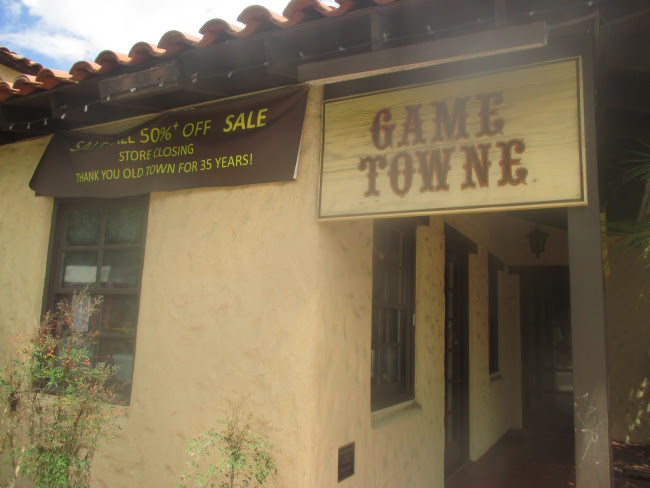 Thirty five years, that's my age, meaning Game Towne has been around about as long as I've been alive. It's certainly been around as long as I can remember, somewhat improbably given the fact that it was located in Old Town, a massive tourist attraction which made parking in the vicinity scarce, inhibiting any casual shopping at the place which sold Dungeons and Dragons modules, chess sets, dice, and a variety of other games.

Seems like a lot of nice stores are closing lately. The manga shop in Mission Valley that I've been going to for ten years closed a couple weeks ago and the book shop in Mitsuwa, the Japanese market, closed, though not before holding an 80% off sale. I bought a pile of Sayonara Zetsubou Sensei manga. I asked the woman at the register if this was the last Japanese book store in San Diego and she said, "Oh, maybe. Closest is Orange County."

They're turning the part of Mitsuwa that held the bookstore into a tea shop and it's sort of fascinating watching the transition. I'm used to seeing one store in a lot close and then another open in its place a little later. In Mitsuwa, the tea shop appeared one day in the middle of the bookstore as a booth and slowly expanded. Until one day the lights were shut off in the bookstore even while one woman stood back there alone behind the register, still trying to sell the two or three books left on the remaining shelves.