I love when an author so successfully creates a feeling of a time past through the lives of people. The new story in Sirenia Digest, "THE CATS OF RIVER STREET (1925)" accomplishes this very well--the year in the title is really not necessary. Just the mention of The Scopes Trial in the headline of a newspaper would have been enough but Caitlin quite successfully integrates aspects of the period into the lives of the people in a natural way--it doesn't feel like a writer touching a series of bases but a woman going to a corner store and getting her groceries in a box to be delivered later or a man's painful recollections of the Great War feel like real things intimately shaping the lives of the people.

The mention of The Scopes Trial, I think, is more than about helping to establish the period, too. The story is a homage to H.P. Lovecraft and takes place in his fictional town of Innsmouth. The Shadow over Innsmouth, like a lot of works by Lovecraft, is at least in part a meditation on race, on the horror of indications of man's fundamentally animal nature. Lovecraft's work evolved from an outlook of outright racist regard for foreigners to mature into an internalised horror, a realisation that the things he had feared about other races were also part of his race, that the fear he had felt all along was a fear of his own nature. "THE CATS OF RIVER STREET" takes the figures of Lovecraft's story and in a slightly dream logic way seems to draw a parallel between the bitter, entrenched worldview of the Creationists and the hordes of Deep Ones abiding below the waves. I thought of this quote from Isaac Asimov's essay "The 'Threat' of Creationism":

To those who are trained in science, creationism seems like a bad dream, a sudden reliving of a nightmare, a renewed march of an army of the night risen to challenge free thought and enlightenment.

I love the portrayal of cats in the story, too. Easily one of my favourite of Caitlin's stories. 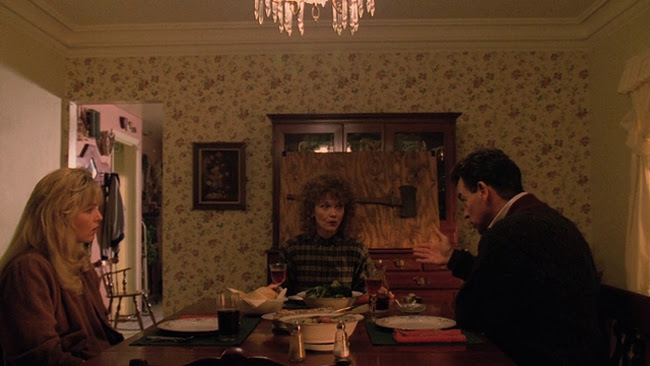 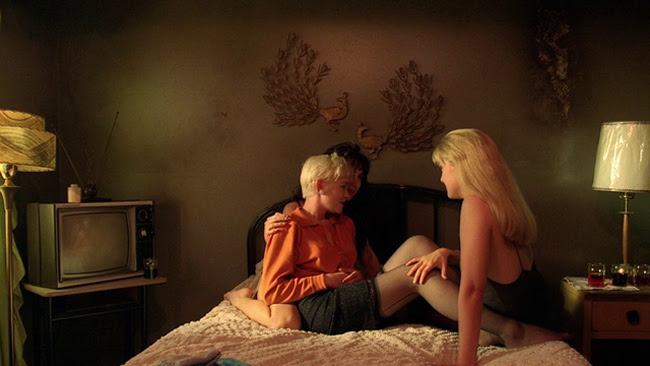 I was reminded of MORE THINGS THAT HAPPENED, the bonus scenes featured on the DVD for Lynch's INLAND EMPIRE. Much as the title suggests, the footage doesn't have the usual feel of deleted scenes included on DVDs which normally have the distinct feeling of watching actors on set. Of being privy to the creative process. MORE THINGS THAT HAPPEN and The Missing Pieces feel like windows into the worlds of their respective films. Lynch edited the footage to both films himself, mixed the sound and added music. And I really love him for that. But even that doesn't cover the remarkable feelings I had watching the footage. 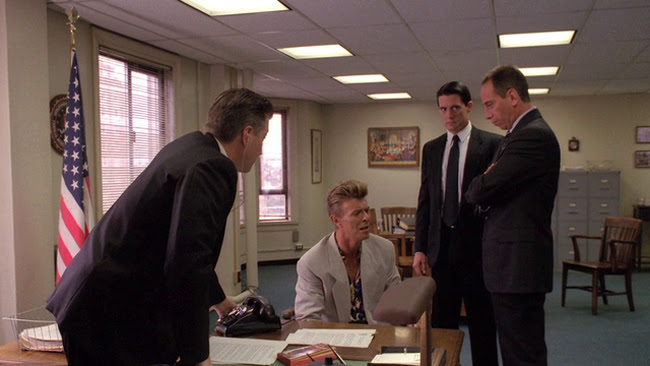 Fire Walk With Me was a movie I watched over and over in high school, it's one of those movies imprinted on my brain that I know for better or worse holds an influence over me. That was in, oh, 1995 to 1997 or so. And now I see these Missing Pieces for the first time in 2014. It's like finally seeing the other side of the moon you've been memorising one side of for years.

A linear comparison wouldn't be accurate, of course. There are things in The Missing Pieces that occur after the events of the movie and the series but the fascination in watching it is in how it expands on scenes throughout the film, finally explaining the meaning behind strange, off hand little comments characters made in the film proper. The whole business about Laura being a muffin, for example, takes on a lot more meaning when we see it's Donna who's originally the muffin in the Hayward household. The later scene in the underground Canadian club where Laura takes on the title now looks like Laura fetishising Donna's innocence. 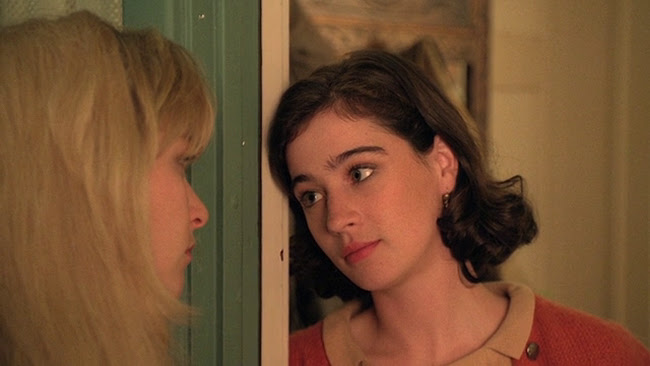 At the same time, in several cases I quite agreed with Lynch's decision to delete scenes. I loved seeing all the footage of David Bowie but, within the film itself, his unexplained appearance is far more effective for its mystery. And that's not to say I'd rather not have seen the extended scene of him in Gordon's office--seeing him interact with the curt and logical Albert and the always slightly on the wrong wavelength Gordon is absolutely delightful. It's just that the scene is right where it belongs, in The Missing Pieces.

There is, of course, a far less linear thread through the film, less narrative pull, though the scenes are put together in not just chronological but an artistically sensible order. This less urgent sense of motion is actually a strength, I feel, though I doubt it's one anyone other than a hardcore Twin Peaks fan would recognise.

At the same time, this format showcases Lynch's peculiar insight into human nature. One of the most powerful scenes to me was one where Sarah Palmer is looking for a blue sweater Laura points out to her she's wearing--and Sarah cries and becomes frightened, echoing the Giant's words from season 2, "It's happening again!" and it's only this one moment that we have any indication Sarah has had problems with her memory, or has maybe had a stroke at some point in the past. 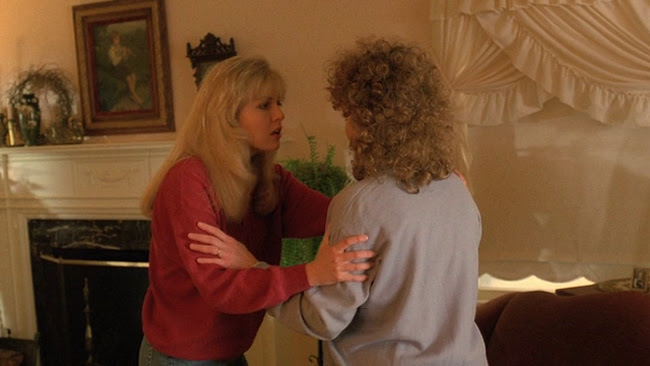 All of the extra scenes of the Palmer family work, actually, and provide a fascinating examination of their subtly strained relationship.

From the standpoint of Lynch's abilities as a pure storyteller, I love how the relaxed pace of Missing Pieces showcases his ability to find ways into scenes. The Norma and Ed subplot from the series was one of my least favourites but I love a scene in Missing Pieces which begins with the two of them in a car playing with a breathalyser. 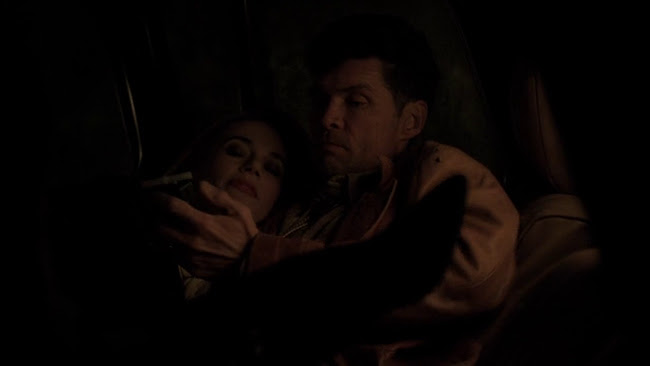 And there's so much more to love about The Missing Pieces--the scene with Jack Nance and Joan Chen in the lumber yard, an unexpectedly really well shot fight scene with Chris Isaak, Kiefer Sutherland's hilariously slightly incompetent Agent Stanley.

Also, it only just now occurred to me the dwarf with the ring is rather like Alberich and the ring of the Nibelung. 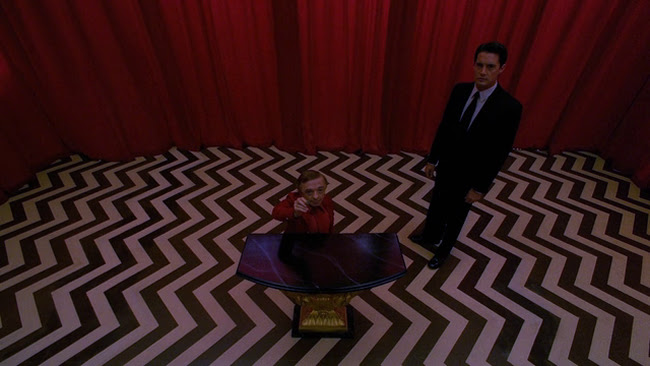