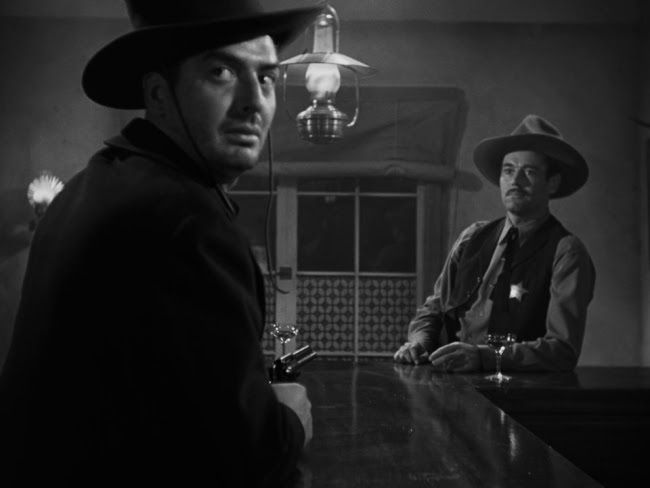 To sleep! perchance to dream:—ay, there's the rub;
For in that sleep of death what dreams may come,
When we have shuffled off this mortal coil,
Must give us pause: there's the respect
That makes calamity of so long life;
For who would bear the whips and scorns of time,
The oppressor's wrong, the proud man's contumely,
The pangs of despis'd love, the law's delay,
The insolence of office, and the spurns
That patient merit of the unworthy takes,
When he himself might his quietus make
With a bare bodkin? who would these fardels bear,
To grunt and sweat under a weary life,
But that the dread of something after death,—
The undiscover'd country, from whose bourn
No traveller returns,—puzzles the will,
And makes us rather bear those ills we have
Than fly to others that we know not of?
Thus conscience does make cowards of us all;

This famous speech from Hamlet appears in John Ford's 1946 film My Darling Clementine where it is recited partly by Doc Holiday as played by Victor Mature. Despite the way many people regard suicide, like noted meat head Henry Rollins in his recently published blog on the suicide of Robin Williams, Hamlet's soliloquy describes not committing suicide as cowardice, an acceptance of the commands of an exterior morality to prolong mortal suffering. Somewhat of an alternative to suicide, a death wish, is sought by Doc Holiday in popular fictional portrayals of him--it may well have been an aspect of the historical figure's personality given that he did live with tuberculosis. Ford's film is beautifully shot though unfortunately diminished by ham-fisted studio interference. 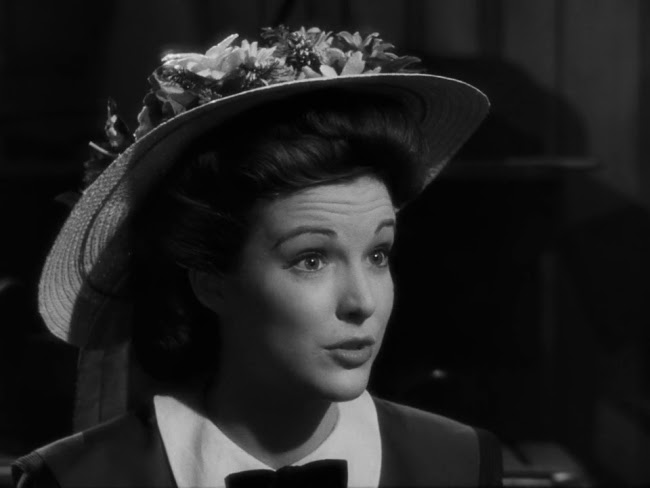 The title is of course a reference to the well known folk song. But it also refers to a character created for the film named Clementine (Cathy Downs) who is introduced rather late in the film as Holiday's true hearted love he's been avoiding since he became ill. He moves from town to town, involving himself in dangerous gunfights before finally settling in Tombstone where he manages a saloon. 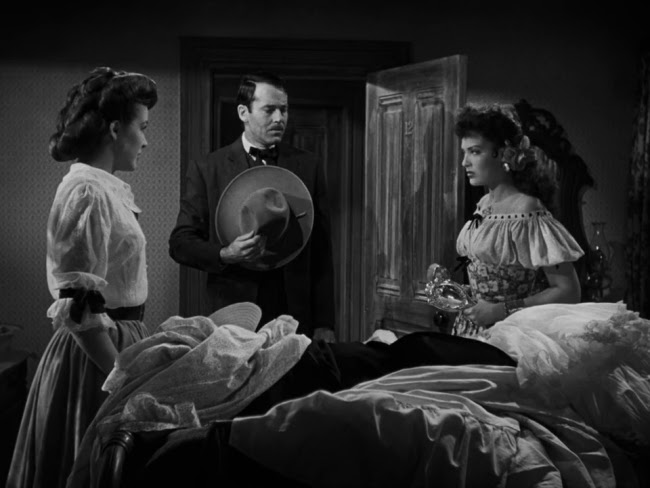 The female lead of the film isn't Clementine but the unfortunately named Chihuahua, a Mexican singer and dancer played by Linda Darnell. She didn't fall for the virtuous young surgeon Holiday at one time was but with the cold, alcoholic gangster. But the film begins with the Earps, Wyatt here played by Henry Fonda. 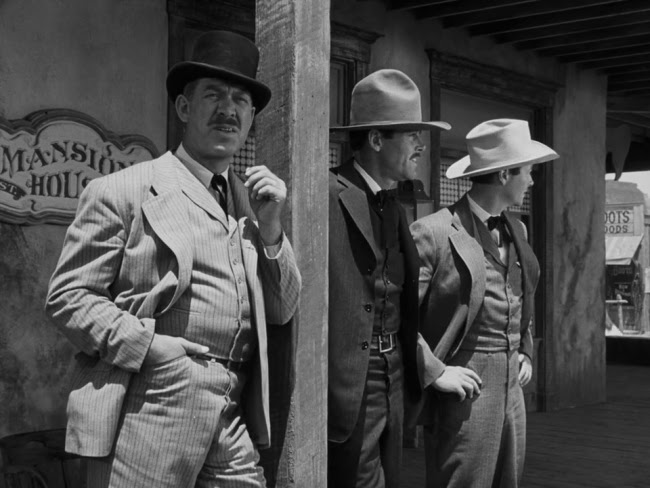 The film creates new motives for the Earps, establishing them herding cattle westward before running afoul of rustlers who murder the youngest Earp brother and steal the cattle. The eldest Earp is played by Ward Bond who stands out in his supporting role with his booming voice and large frame. It's no wonder he's a recurrent figure in Ford's films, much like Monument Valley which here also makes an appearance. 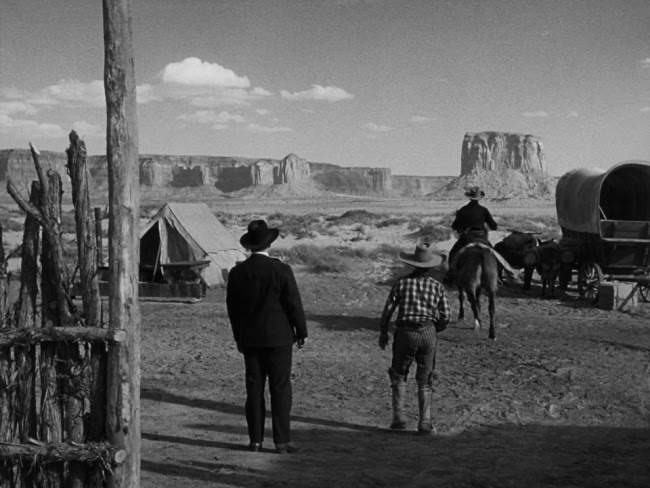 It's very easy to spot the scenes inserted by the studio when the film switches from Ford's amazing, expressionist dark photography of arid western landscapes to flatly lit studio scenes where people say trite things. The worst is the very ending of the film which I won't--I guess the word is "spoil" but it begs the question of whether you can spoil what's already spoiled. 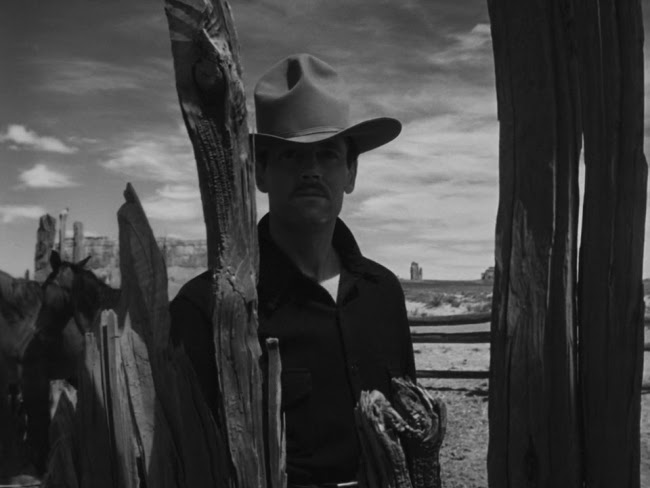 One probably couldn't ask for a better Wyatt Earp than Henry Fonda. His earnest and sensitive yet calm and watchful performance makes this very simple rendering of the character effective. All he wants is to avenge his brother and to see law and order maintained--despite the fact that he and Holiday immediately strike up a friendship which Ford and the actors convey without giving the motives for it in dialogue, a nicely subtle relationship unusual for the stratified depictions of good and evil typically portrayed at the time. 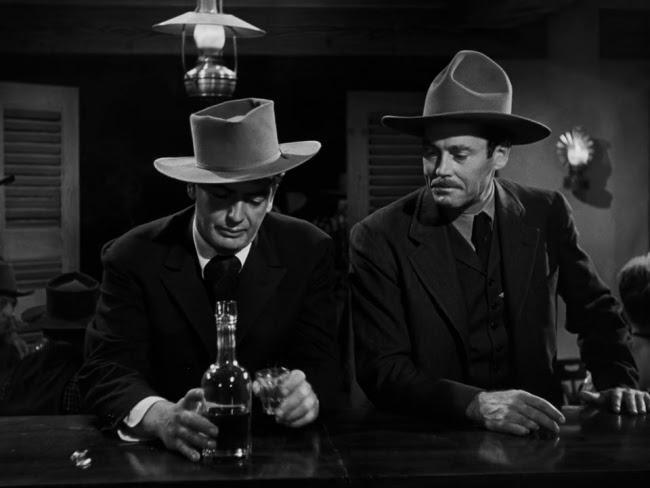 Mature's performance as Holiday is all right but one senses some vast untapped potential. The role would probably have been better off in the hands of John Wayne or Humphrey Bogart. I wrote about a film called Death Wish a few days ago which really didn't portray a death wish--I gather the novel on which the film is based did. Holiday in this film, who drinks heavily despite the fact that it worsens his condition, and is always ready to draw his pistol against the most dangerous gun fighters he meets, is a more accurate portrayal of a man who's always hoping that the axe will fall soon.