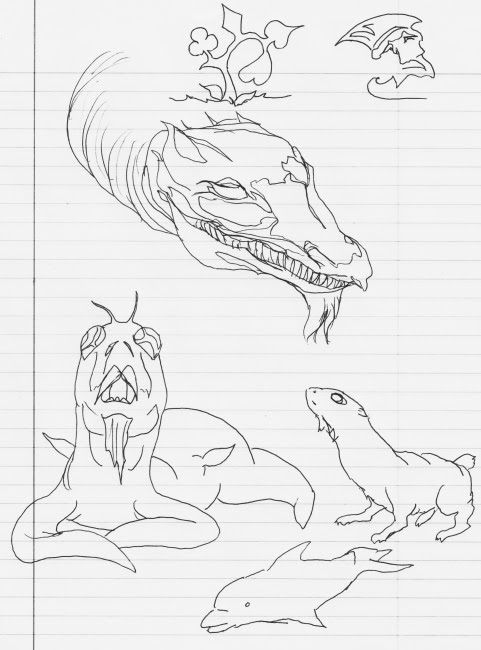 Here are some of my first doodles of the semester. Most of them I did during my Media Communications class which I need for my degree and I think has something do to with television and film. But all it consisted of to-day was the students introducing themselves and choosing a spirit animal. I chose a duck--because Donald Duck was my favourite cartoon character as a kid. Almost every guy in the class chose bear or wolf or pit-bull. Hearing one of those, the teacher, a young woman from north New Jersey, dryly said, "So we know not to mess with you."

She was very young, under forty, I'd say. My other class is a mythology class which is being taught by an Indian woman in her 40s named Balasubramanian--she told the class she'd been teaching for twenty eight years. One of the students asked where she got her master's degree and she replied she'd gotten her first masters when she was nineteen in India and her second when she was twenty three in Ohio. She added her twenty seven year old daughter had a PhD. She has two daughters. Two daughters and two masters degrees, I can only imagine she knows how to freeze time.

When she was asked which were her favourite gods of the many she studied, she said her favourite two were Ganesh and Mary, mother of Christ. I liked that she didn't begin the class with any warnings about how Christianity would be treated as myth. I can see how she might not consider it a big deal considering how Hindu gods are regarded in the west.