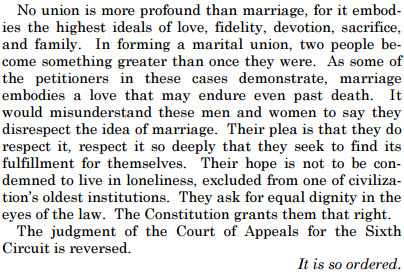 This is the concluding paragraph of the United States Supreme Court's majority opinion to-day--you can read the whole thing in this pdf. It's an excellent thing, an example of government behaving as it should, insuring the right to individual freedom is unobstructed. As the court expresses earlier in the document, the Constitution's fourteenth amendment recognises liberty "to certain personal choices central to individual dignity and autonomy, including intimate choices that define personal identity and beliefs."

The Supreme Court's basic purpose is to interpret the Constitution with respect to legal cases brought before them. The relevant part of the fourteenth amendment upon which the Court's decision is based states:

No State shall make or enforce any law which shall abridge the privileges or immunities of citizens of the United States; nor shall any State deprive any person of life, liberty, or property, without due process of law; nor deny to any person within its jurisdiction the equal protection of the laws.

After the majority opinion, the released court document also contains opinions of four dissenters. The essays written by Roberts, Alito, Scallia, and Thomas are quite long--I only read Roberts' and Thomas'. Just a few days ago I read an article about how Roberts' decisions were becoming increasingly liberal but here he offers a thoroughly bullshit pedantic argument. In the face of the majority opinion which covers just about every base--from the mutable definition of marriage throughout history to citing specific examples of how the inability to marry threatens the peace of mind of same sex couples--Roberts can do nothing more than argue that the court oversteps its jurisdiction and, incredibly, bring up the old argument that marriage ought to be about procreation and providing a stable environment for children. This latter seems particularly ludicrous in light of the majority's example of a same sex couple whose legal custody of three children is threatened by their inability to marry. Not to mention that enforcing a particular definition of marriage would seem to contradict his initial argument that the court has no right to do so.

I was more curious about Thomas' argument because I'd heard it contains a bizarre reference to slavery. His argument is also almost entirely pedantic, holding forth at length, citing John Locke extensively, to insist that the word "liberty" in the Constitution could only refer to physical movement from place to place, apparently forgetting the clause also uses the words "privileges" and "immunities". But this argument makes rather hilarious another one he uses:

"Aside from undermining the political processes that protect our liberty, the majority's decision threatens the religious liberty our Nation has long sought to protect."

What do you mean? Religious people are still allowed to move around all the want.

In fact, though the thesis Thomas starts with is that the current ruling will inevitably damage other freedoms, he not only cannot offer a specific example of it doing so, he can't even think of a hypothetical situation of it doing so, in rather sharp contrast to the copious examples presented in the majority opinion.

His argument about slavery isn't quite as bizarre as I thought it was going to be, resting more on the word "dignity" and the wording of the majority opinion that it was granting dignity to same sex couples. Thomas says:

He goes on to say, "The majority’s musings are thus deeply misguided, but at least those musings can have no effect on the dignity of the persons the majority demeans." So it's possible for the court to demean people but not to affect their dignity. Again, we're in pedantry, and it's impossible for Thomas to demonstrate how the majority decision makes things worse rather than alleviating wrongs perpetrated against people.

And so, America, I'm afraid you'll just have to face the very slight possibility of a gradual, imperceptible population decrease. You'll have to face a country where some people can do more things that you might not want to do and have absolutely nothing to do with you. Most terrifying of all, the paths to happiness and self-fulfilment now have greater legally recognised variety. Good luck.