Rebirth of a Blank 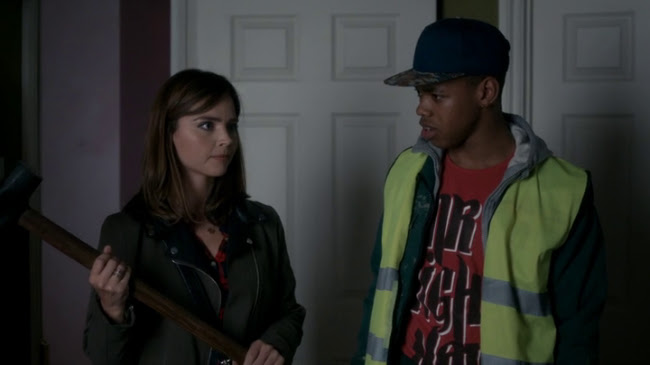 There's a rumour that Joivan Wade, the actor who played Rigsy in last season's Doctor Who episode "Flatline", will be joining the show full time as a companion. He's definitely going to be in at least one upcoming episode, maybe it'll give him more personality. Based on my second viewing a couple nights ago of "Flatline" I'd say this guy as a companion would be the new series answer to Adric. He has it all--the numb face, the overemphasised line delivery, and youthful precocity that somehow appeals to everyone on the show but no-one at home, setting up a grating dissonance.

Something that might be leaning show producers in Wade's direction is the fact that, according to his Wikipedia entry, he's a "YouTube sensation". The first episode of his series, Mandem On the Wall, does have over a million views:

It's kind of cute but it works on a completely different level from Doctor Who. I can see a big part of its appeal is the amateurish quality of the performances; we're meant to see the actor through the character. These are descendants of Jimmy Fallon laughing at his own jokes on Saturday Night Live. But Jimmy Fallon isn't this shrill. Wade would look very natural in a TARDIS occupied by the Sixth Doctor, Peri, Adric, and Mel. They could pair off Mel and Rigsy and promote it as "The most unbelievable romance in the galaxy!"

I listened to three audio plays this past week, all from 2004, The Harvest, The Roof of the World, and Medicinal Purposes. The Harvest was the best of the three though Medicinal Purposes was interesting and not only because the Sixth Doctor in it is upstaged by none other than David Tennant, who plays Daft Jamie. He gets to use his natural Scottish accent, the accent and his name reminding the Doctor of his companion, Jamie McCrimmon, and you might recall that in "Tooth and Claw" the Tenth Doctor took the name James McCrimmon. But Daft Jamie is an actual person from history, figuring in with the Burke and Hare murders. An Irish doctor and his servant in mid nineteenth century Edinburgh who first snatched already dead bodies and then escalated their activities to murder, all in the name of medical research. The audio features the Doctor simultaneously admiring and disliking the pair, even telling his companion Evelyn that there's no such thing as good and evil men, that there are always shades of grey. Which is fascinating considering half the other audio plays feature the Doctor talking about the absolute, verifiable existence of purely evil men.

Tennant plays Jamie as mentally impaired and I can imagine the character being pretty over the top and badly conceived to painful effect in other hands.

But the better play was The Harvest, a Seventh Doctor story which features he and Ace infiltrating the ranks of a hospital where some very strange things are happening. There's great atmosphere aided by Sophie Aldred's natural delivery when posing as an employee, chatting with the almost equally effective Philip Oliver as Hex, a new companion. I'm now reflecting on what a breath of fresh air Aldred was as a companion after Mel and and Peri. I wonder how long we'd have to wait for the new series' Ace after the new series' Adric.

Posted by Setsuled at 3:40 PM
Email ThisBlogThis!Share to TwitterShare to FacebookShare to Pinterest