Get Down with Your Bad Game of Thrones Self 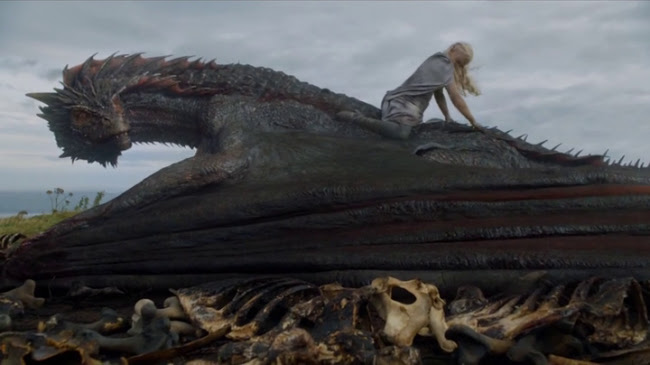 I want to preface this by saying I was eating a really bad burrito while watching last night's Game of Thrones season finale. I was out yesterday and was heading home a little late when I thought, why not have an adventure and go to a Mexican place I've never been to before? Then I won't have to cook when I get home and I can just sit down and be whisked away to the magical land of Westeros for a wonderful evening of swords, sorcery, and dragons. Things didn't go according to plan, not that the burrito was made badly or had spoiled food or something. It just had sour cream in it and I hate sour cream, it gives me this heavy, saggy, gross feeling. Sounds like I'm leading to a metaphor about the show, doesn't it? Well, I'm not exactly, the show was better than the burrito, though it wasn't perfect, certainly not as good as last season's finale. But I finally thought of a way to succinctly describe the show and how I think it's not the insightful glimpse into statecraft and power players people think it is. Game of Thrones isn't a political fantasy, it's a BDSM fantasy. 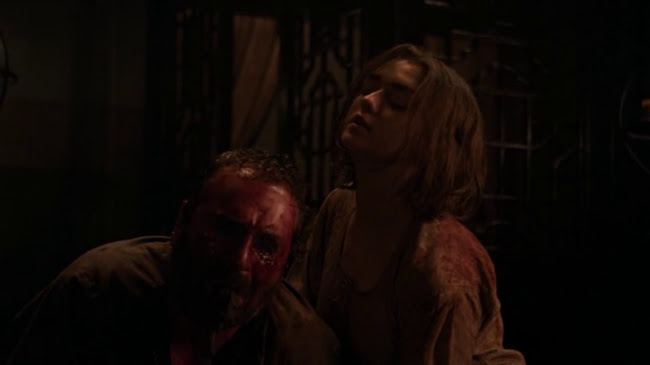 It was nice for a moment watching Arya turn the tables on Meryn Trant. Though it turns out my prediction last week was relatively accurate:

I wonder if Arya will actually be allowed to carry out a simple, straight forward revenge killing on Meryn Trant. Based on her luck so far, my money would be on "no", or if she she does it'll end up being a mercurial victory of sorts, like killing him somehow causes Sansa to be killed or something. At the very least, she'll probably be expelled from assassin school.

But before I pat myself on the back too much about being such a good prophet, I did say this a few weeks earlier:

Now we have the Empire Strikes Back of Game of Thrones season five. Not in terms of quality, though it wasn't all bad, but in terms of it being a middle act (episode six of a ten episode season) that ends badly for our heroes, such as they are. This being the case, it wouldn't surprise me if this season ended on an abnormally positive note.

As a prophet, I guess I'm probably right around 50% of the time, in other words like someone who doesn't know what the fuck's going to happen.

And of course, whether or not Arya's actually been expelled from the school hasn't been established, her scene of punishment was too surreal to make heads or tails of. Is she permanently blind? Do two Jaqens mean two people can use a face at once? So why is Arya able to get one working by physically stealing it? It all works a bit better thematically, the fundamental conflict between Arya's personal drive for vengeance clashing with the complete denial of self seemingly embraced by the House of Black and White. Game of Thrones gives you your revenge fantasy and then tells you you've been a bad, bad girl. 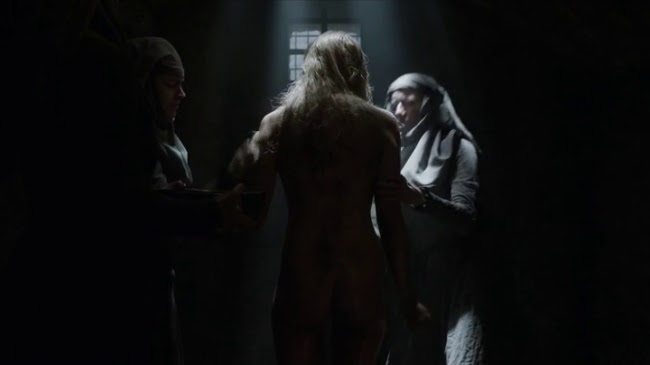 I kept seeing comments from people about how Cersei "finally" got what was coming to her. In one of the--I think there are at least seven--articles on Slate about last night's episode, Dan Kois has this rebuke, "But Cersei 'finally' got punished? Her kid dying wasn’t punishment enough? What about her other kid dying? At this point I am all in on Cersei and I’d be delighted to see her riding in on a dragon sometime in Season 7, laying waste to the haters with some cleansing fire." I really don't understand the particular hatred people have for her other than that she hates Tyrion, one of the few nice guys in the world. Do we really feel a need for this punishment? Though honestly, I don't think Cersei's walk of shame quite works as intended. 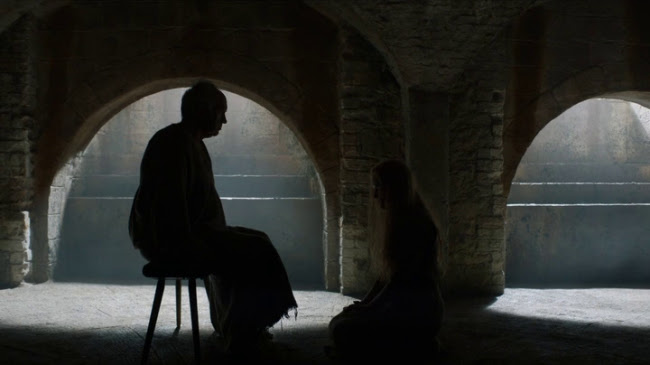 I actually don't believe the people who are saying it went on excruciatingly long for their tastes. I think they're covering their own shame, the fact that the big takeaway from the scene is that Lena Headey looks fantastic naked, even with a cropped blond wig and a blond merkin. 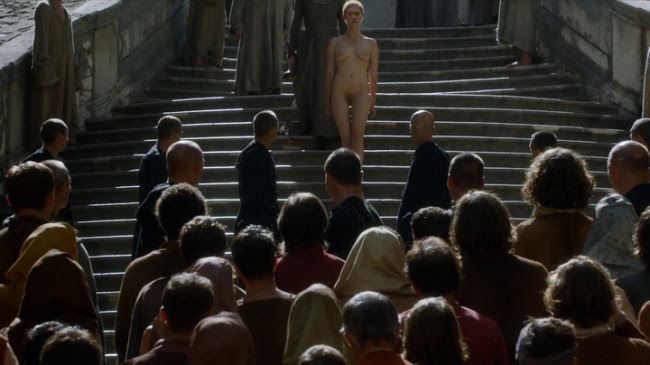 I felt a little bad for Cersei but it's really hard to connect with the reality of the scene when none of the people around her feel authentic. Who are the citizens of King's Landing? Cersei's unpopular but why, exactly? When Charles I was beheaded, it turned popular opinion against the regicides partly because the execution of a ruling king by his own subjects was unprecedented, rulers were seen almost as divinity. So one being forced to walk naked through the streets might excite the derision you see if she's unpopular but it also would have provoked some awe just for the significance of such a person being so humbled. People throwing food at her ought to have also exhibited quite a bit of nervous energy. Not only because you're basically looking at a rather potent symbol of your whole universe not functioning properly but also throwing crap at your sovereign when she's two feet away from you and can see and possibly remember your face doesn't seem like it's in the interest of living a long life. Has anyone heard of "The Emperor's New Clothes"? The people jeering at Cersei seem less like actual citizens and more like manifestations of Cersei's nightmares, or tools to punish her for her pride which is tied to sexuality by the focus of the High Sparrow's questions in her confession (again, he's looking more Catholic than Protestant).

I'd also like to point out that Julian Glover appeared in this episode just to wag his eyebrows. It is nice that Game of Thrones can be so casual with a prominent guest star. Imagine how long it took him to get into makeup and costume just for this: 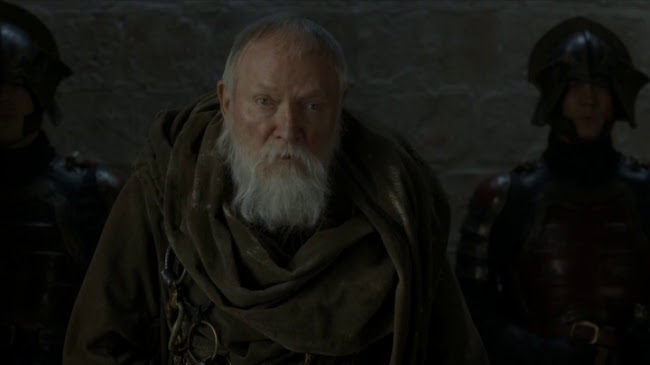 Maybe it's supposed to be like the French Revolution now rather than the Reformation, referencing a time when the old hierarchies were breaking down. It's hard to say, big events are basically just being thrown into the pot without foundation. There's only one thing that really ties everything together; viewers of Game of Thrones, as one of the Sand Snakes so beautifully said, "need the bad pussy." At least in our fantasy. 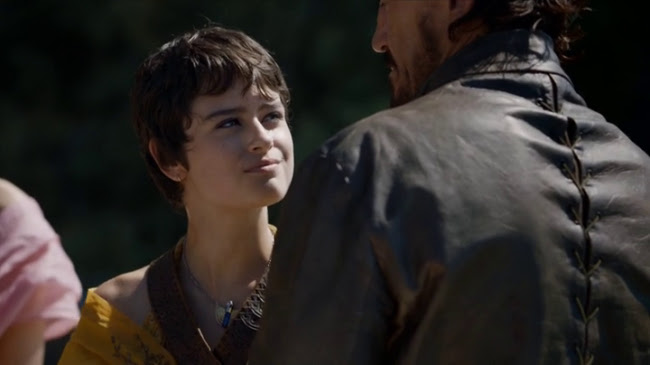 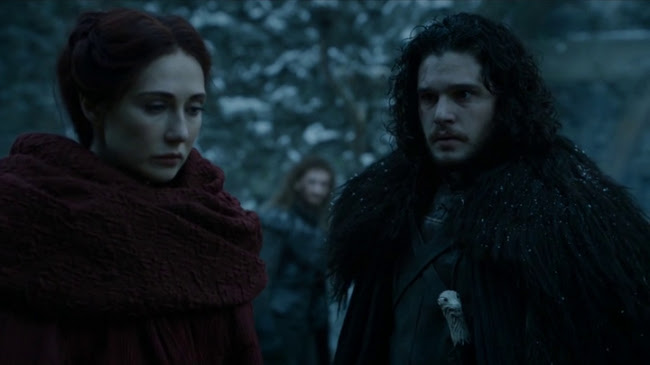 Speaking of Snow down there, Jon Snow looks down for the count. I assume the traitorous Night's Watch locked up his dire wolf before murdering him. Jon ought to have been more careful considering he was in charge of a bunch of, as we're frequently told, "murderers and rapists" who hate him. If anyone really got what was coming to him, it was probably Jon, actually. He really did know nothing. 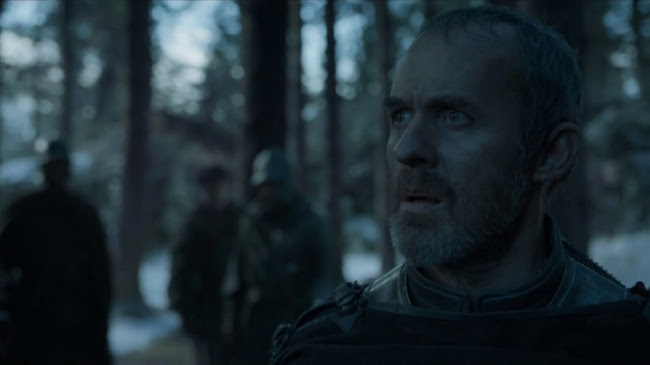 Unlike most viewers who seem to be ashamed of indulging in the show's sadomasochism, I have no problem with it but my favourite plot from the finale was the final destruction of Stannis, which was probably the least S&M plot of the season. We actually do get an impression of Stannis' followers--their suffering as they starve and freeze, their discomfort over the sacrifice of Shireen. And the eternally smug Melisandre realising it was time to jump ship was just wonderful. Although--sacrificing the guy a few seasons back got her a super powerful shadow monster and sacrificing Shireen just made the snows melt? Hardly recompense for the damage it did to Stannis' image.

But anyway, the image of the Boltons' massively overwhelming forces converging on poor Stannis' remnants was marvellously brutal. 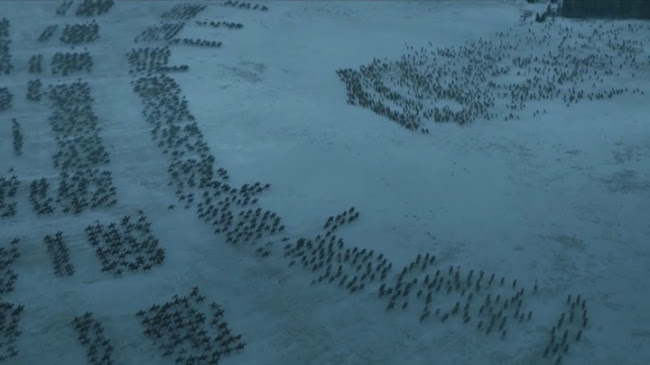 He sacrificed everything, even his own soul, you could say, in killing his daughter. All in the hopes of being the one to save the north from the White Walkers and it all comes to nothing. There's an odd grace in his finally just telling Brienne, "Do you your duty." I think I'd be really disappointed if he ends up having survived next season. 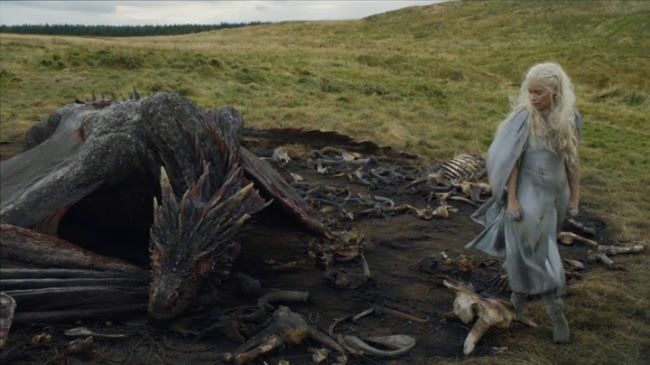 Oh, yeah, almost forgot to talk about Meereen. It felt like not much happened but setup for next season. It was nice seeing Varys again, who I like despite not really being clear on how he maintains his spy network. It's one of the show's many examples of a lot of telling without showing. Which is the case with Tyrion's ability to run a city in this episode, sadly, as for some reason Daario seems to be the man with all the insight and ideas.

In a final stroke of melodrama, Daenerys leaves Mister Drogon Dragon (seriously, it's like naming your baby "Humon") and is instantly surrounded by a whole army of Dothraki, coming from all directions. They must know the screenwriters.