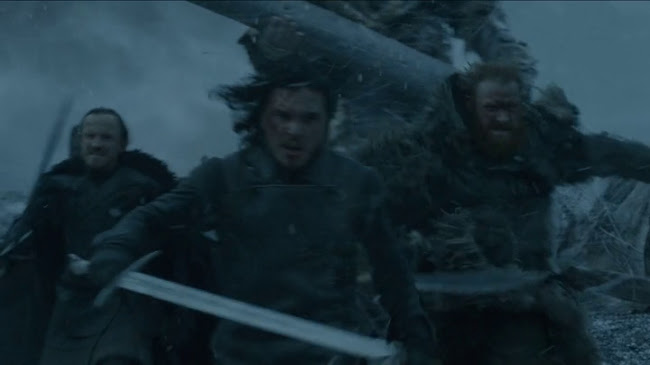 Well, that wasn't just a good Game of Thrones episode, it was one of the best and I would even dare to say it had one of the best action sequences in television history. One of the keys to it was surprise which unfortunately has probably been spoiled for everyone now for every news and entertainment site on the web splashing screenshots and spoilers in their headlines. Nevertheless, as a courtesy to the last three of you who haven't been force-fed the scoop, I give you a 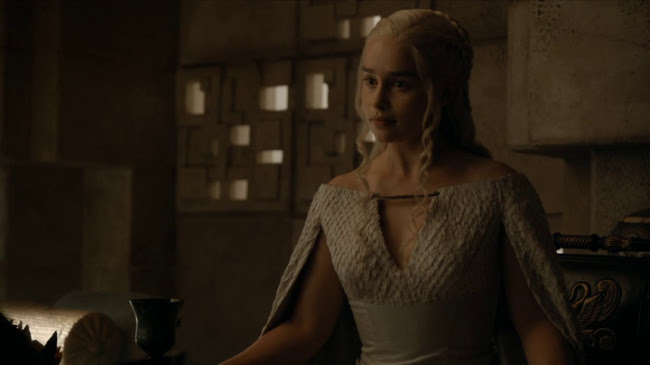 I would like to propose this as Daenerys Targaryen's theme song:

"A ruler who kills those who are devoted to her is not a ruler who inspires devotion." It's funny because it's obvious. Too bad Tyrion wasn't around when Daenerys publicly executed that one devoted fellow popular with the "common people". When Tyrion asks her what it was like when she only had the support of the common people and not the rich I noticed she wasn't quite able to divulge she hadn't exactly allowed that scenario to play out organically. 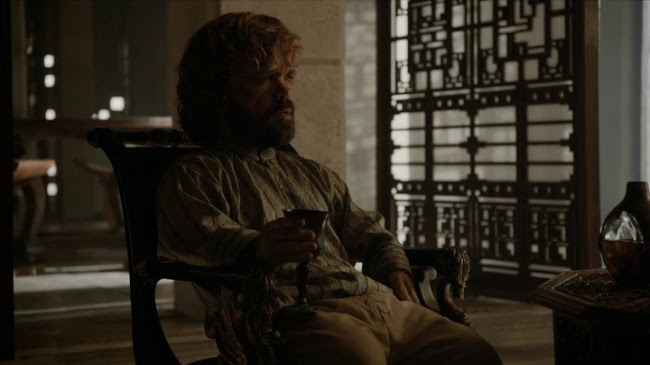 But Tyrion and Daenerys sitting down together over wine came out so much better than I'd dared hope. The actors have chemistry--Emilia Clarke seems to up her game quite a bit acting opposite Peter Dinklage, she has layers, visibly suppressing strong emotions provoked by Jorah and by Tyrion's criticism, consequently making her sexier than she's been in quite a while. And, yes, I'm a little ashamed of myself for saying it but, gosh, when she said she was going to "break the wheel" it was just so adorable. The music swelled so Tyrion didn't get a chance to say, "How? And to what end?" 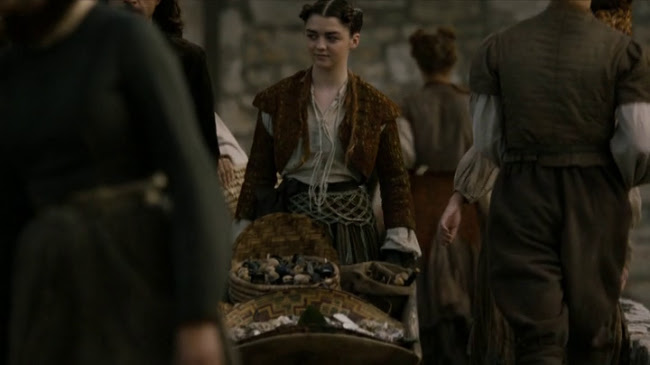 The show's growing problem with a simultaneous obsession with and absence of the "common people" was tempered a little with Arya's story. This week she's been trusted with a mission where she poses as "Lana", essentially Molly Malone, selling cockles and oysters, though not crying "alive, alive-oh". Maybe in the future? I would like that. It would be ironic since she's all about killing.

There are so many extras and a sense of city life around Arya in Braavos, it's nice. The episode generally feels a lot more expensive than last week's markedly low budget outing, the single shot of a dire wolf conspicuously straining the resources of an episode mostly composed of scenes of one or two people in rooms. 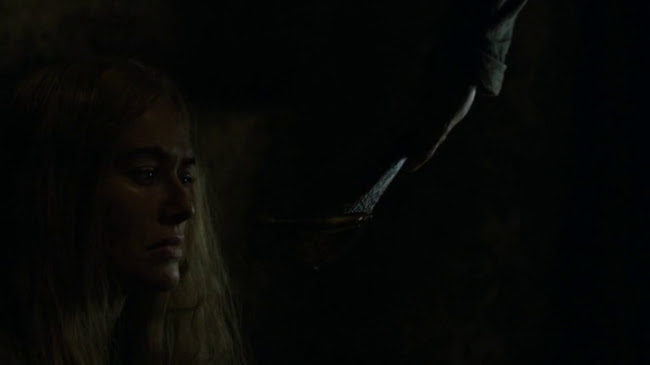 Not that this episode couldn't go small when it needed to. Poor Cersei. I feel like I'm the only one who likes her. Think about how much harder it is to endure solitary confinement when you have no faith in a greater good. Of all the characters on the show, Cersei has always seemed the most alone to me, and that's saying something. The only thing she has faith in is fundamental human corruption and I rather think her current circumstances only confirm her belief, only they make her realise she wasn't broad minded enough. She thought life was cruel but it's even crueller than she thought. Reviews I read consistently try to read other things into her--people talk about how, for once, her name can't protect her. She hasn't had faith in her name since she was a kid, we saw that in the first episode's flashback. She always regarded it as a tool she would use for all it's worth because nothing else was going to save her, either. 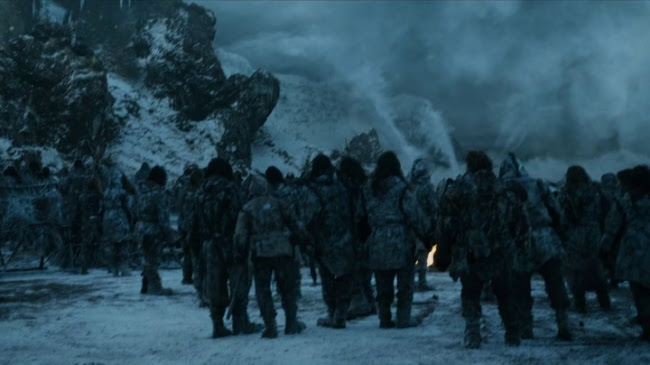 Speaking of hopeless situations, what can I say about that fantastic, huge sequence sprung on us at the end? What seemed to be a scene about Jon negotiating with Wildlings was crashed by the very threat Jon was there to warn them about. Apparently, like Tyrion meeting Daenerys, this was also a big departure from the books. I suspect we're seeing things like this because Benioff and Weiss have been noticing that whenever someone talks about writing on Game of Thrones they talk about George R.R. Martin. I think they figured it's time to make hay while the sun shines. To their credit, they're doing a bang up job. 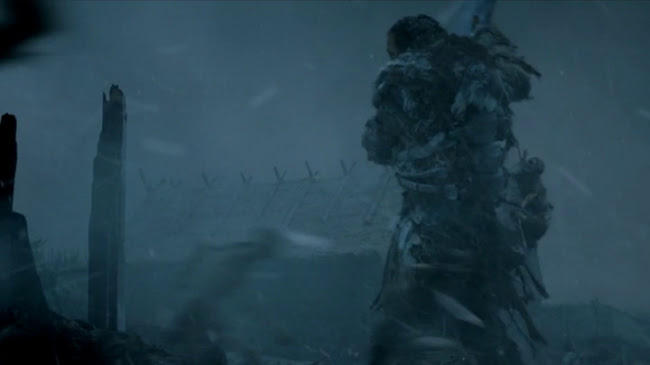 Ray Harryhausen skeleton warriors versus a giant, very cool. And that's just garnish. There were eerie moments in the middle of the action like the sickening sight of the people who were shut out of the gate, the weird quiet zombie children, and, of course, the revelation that Jon's got a magic sword. Like Siegfried, the spurned creation of Wotan who reforges the sword Notung to become a hero anyway, the bastard Jon Snow has his Longclaw. You know, things are looking pretty traditional for a show that's supposed to be about bucking tradition. But hey, what works, works.

Why aren't we getting tired of zombies? A few weeks ago, Yahtzee Croshaw of Zero Punctuation remarked that the introduction of zombies are becoming the hallmark of lazy writing. Lazy or not, I wasn't sorry to see them last night. They clearly resonate with people to-day. I find myself compelled to connect the zombie menace with the show's inability to provide much character for the "common people" it puts at the centre of discussion. I think there's a subconscious horror here, perceiving vast quantities of angry, unknowable people. 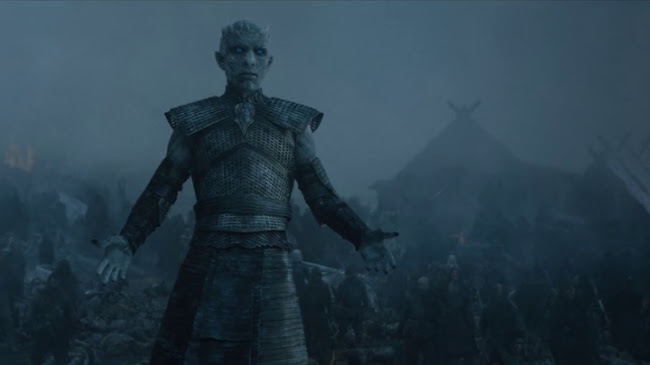 I particularly liked the quiet ending where Jon Snow and his comrades row away from shore to see the undead hordes quietly looking back with a White Walker who looks like Darth Maul making eye contact with Jon. It was a wonderfully eerie and worrying moment filled with foreshadowing. Though if I were that White Walker, I'd make a priority of learning how to use a bow. 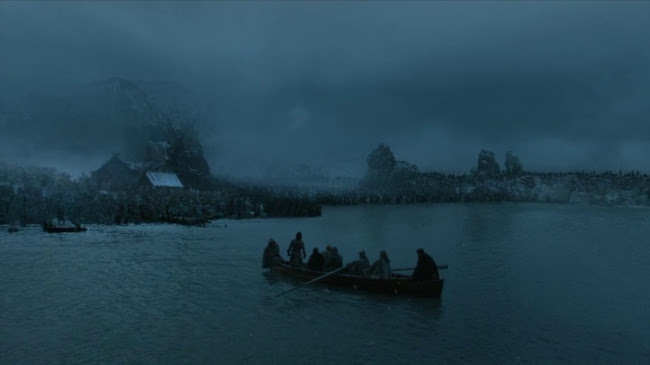