Believe In the Lion 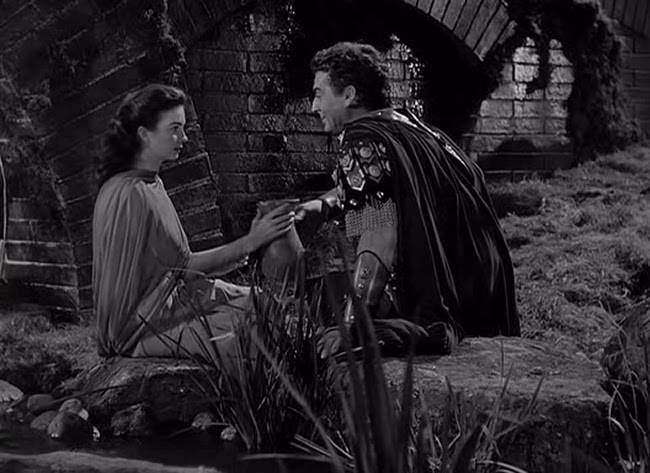 What is the intrinsic value of faith? Forget about any particular faith, but just the concept of firmly and passionately believing in something you'll never have concrete evidence for. A Roman Captain who worships Diana and a Christian woman each finds the other's commitment seductive in 1952's Androcles and the Lion based on George Bernard Shaw's 1912 play of the same name. I haven't read the play but I can believe when I read that the film is rather faithful to the source from the scene where the Captain and the Christian express their mutual admiration--it's an unusual scene to say the least in a 1950s sand and sandal film. Nonetheless, the film does have plenty of the grating Christian smugness normal in films like this of the period and is diminished also by a poorly cast Alan Young as Androcles. A lot of the comedy doesn't work but the unconventional story and good performances from Jean Simmons, Robert Newton, and Victor Mature make the film enjoyable. 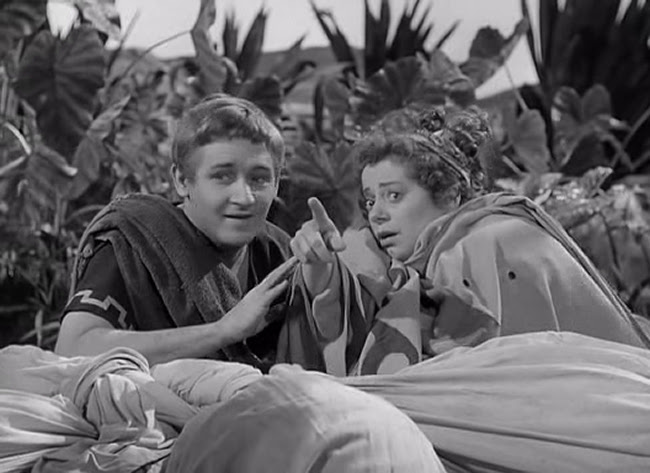 Androcles is introduced as a pacifist animal lover to the point of saintly idiocy. He's a Christian so when his wife hears about Christians being rounded up to be fed to the lions she badgers him until he finally agrees to flee with her. Elsa Lanchester plays his wife, named Megaera (Shaw seems to have chosen mythologically significant names) and I think we're meant to take her as an unbearable nag. Am I weird for finding her intensely attractive? 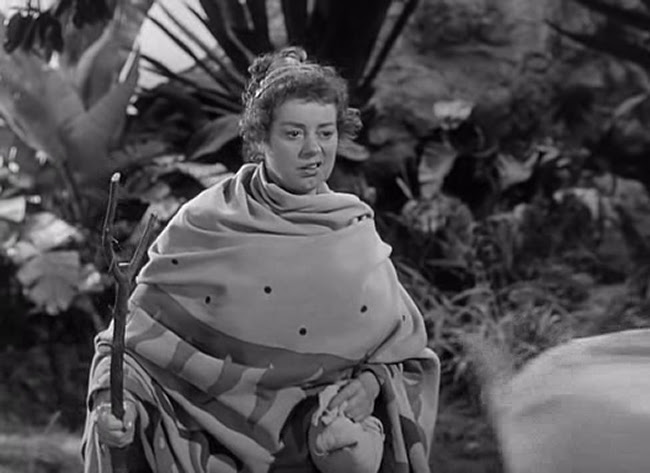 I can always use more Elsa Lanchester in my life.

But she doesn't stick around long, running away in terror never to be seen again when Androcles befriends a lion with a thorn in his paw. 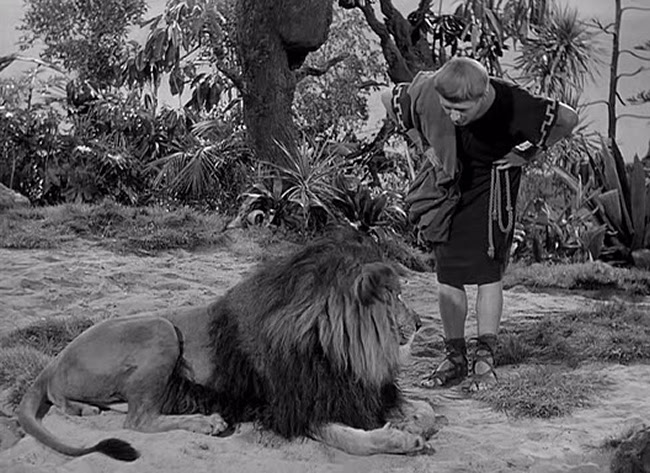 A lot of trick photography and in some cases a man dressed as a lion are used but there are a few shots where Alan Young is obviously in frame with a real lion. So I have to hand that much to him but his performance as the guileless Androcles is grating as hell. Young is and always has been the voice of Scrooge McDuck--even to-day at the age of 95--and I've always liked his work as the character. It turns out a talent for playing a crotchety old Scotsman does not indicate equal skill as naive holy fool.

He's soon captured and taken into custody by the Captain (Victor Mature) and his men. Among his fellow captives are a noblewoman named Lavinia who spontaneously steps in among the Christian prisoners of her own accord and a burly proselytiser named Ferrovius. 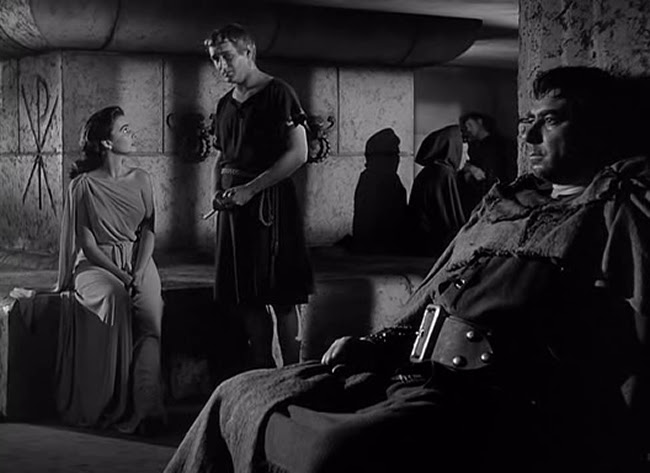 Robert Newton plays Ferrovius like Long John Silver but with slightly better diction. Considering how uninteresting his performance was in 1936's Jamaica Inn, I wouldn't blame him for essentially just playing Long John Silver in every film after he gave the definitive performance in the role in 1950's Treasure Island. Ferrovius has a violent temper for which reason he's sworn himself to pacifism, something which leads to a subtly blasphemous statement at the end of the film.

Lavinia is played by Jean Simmons. 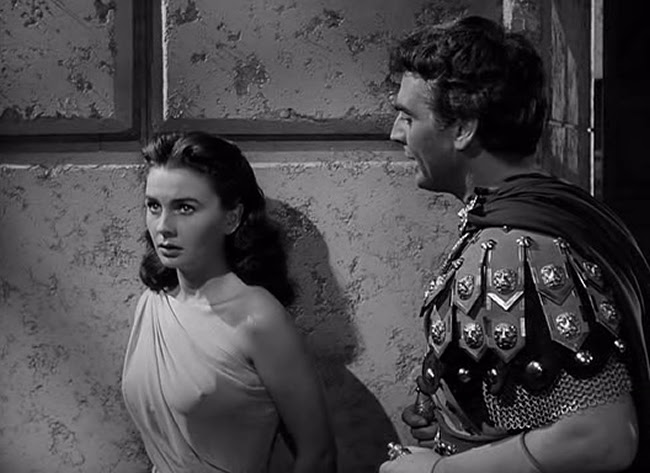 If you've seen at least two sand and sandal films of the 50s you've seen Jean Simmons who was for some reason in almost all of them. Here she falls for Mature's character and as dubious as I find the philosophy of loving faith for faith's sake there's something really sexy about how much she loves the fact that he worships Diana and he loves the fact that she worships Christ and neither wants to convert. I guess it's religious opposites attract. I don't know, there's something about the mutual tension and compulsion I find rather endearing. It's helped by the fact that Mature tackles his role with respect for the character's belief. Among the other Romans, he's particularly calm and clear-sighted.

Simmons is great as Lavinia, too, playing a woman who committed herself on a lark but nevertheless with fervency. One could read this as a person who had lost faith in everything so she grabbed onto the first thing and held tight. Maybe that's why she's particularly beautiful in this film. 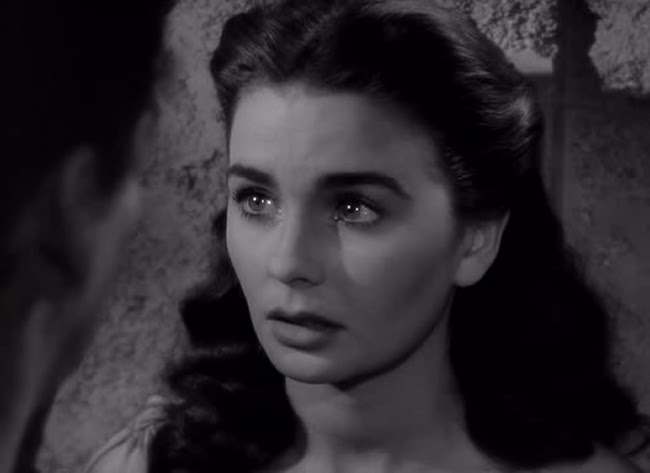 Posted by Setsuled at 4:10 PM
Email ThisBlogThis!Share to TwitterShare to FacebookShare to Pinterest