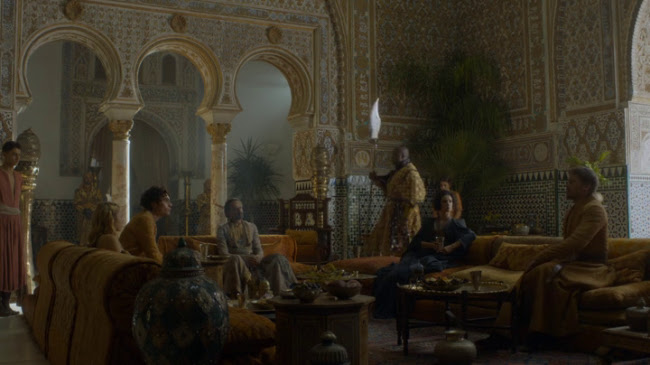 Just like in real life, there are horrible people on Game of Thrones, but last night's episode showed that, unlike real life, being horrible tends to come with great skills and talents. This sometimes strains credibility, other times it contributes wonderfully to tension. It led to one of my favourite scenes in the series last night. 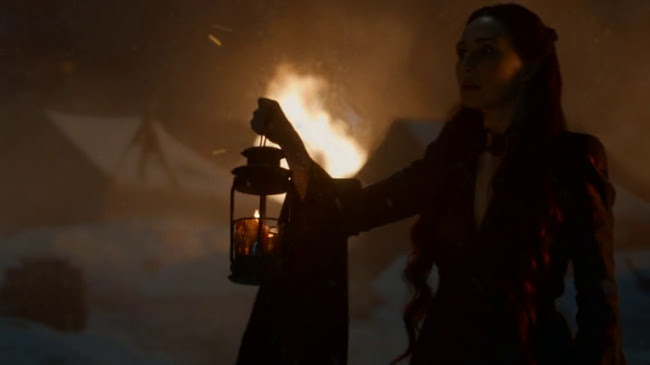 As you know, cutting off Theon's penis gave Ramsay Bolton absolute power over the cowardly young womaniser. In last night's episode, we learned that Ramsay is also capable of leading a band of twenty men and crippling an army without anyone knowing he's there. When did Ramsay become a brilliant commando? Somehow the fact that he flays people alive seems to inspire respect so I think we're supposed to assume a whole barrel of skill perks comes along with habitual impunity. If any of the more ethical characters had tried this--Jon, Jorah, Jamie (that's a lot of Js on this show. Too bad Agent Cooper's not here to do his rock throwing trick)--I think we all know things would've gone horribly wrong.

But okay, it led to one of my favourite scenes of the series, so I can't exactly complain. I'm referring, of course, to poor little Shireen getting burned alive. 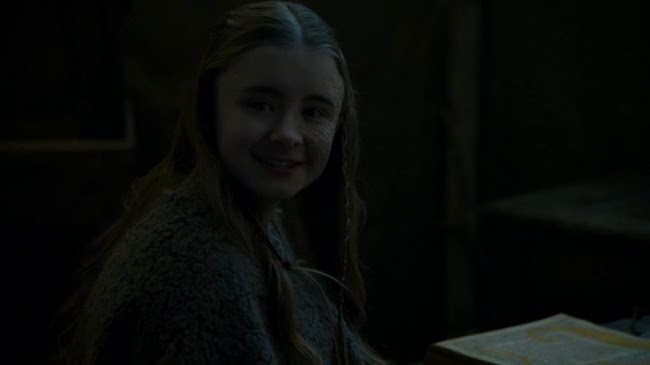 I loved the build up to it with Davos visiting her and giving her the stag he'd carved for her. And Stannis talking to her about being forced to make the hard decisions. Stannis is motivated by ambition but there is actually an altruistic element here--his men are dying, and if his men die, and it's his responsibility to handle the White Walkers, then the choice could be between killing his daughter or allowing all of Westeros to be destroyed. Melisandre seems damned sure he's supposed to be the one who saves the kingdoms.

I couldn't help thinking of The Wicker Man (the original, not the one with the bees). Here we are in the middle of a pagan human sacrifice and we can see the rationale. It was horrific and wonderful. 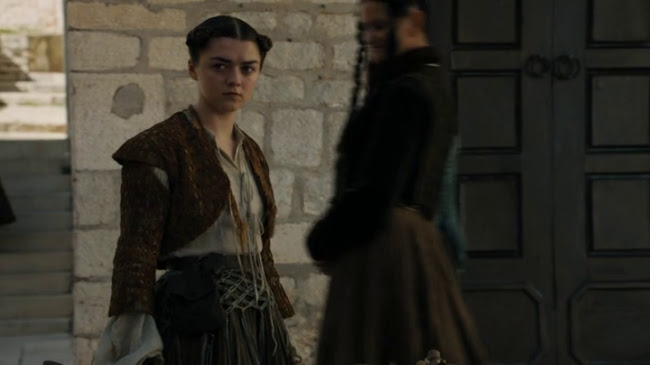 For a more personal sort of killing we turn to Arya in Braavos. I have to say she doesn't seem like a very convincing liar so far, unabashedly staring at people all the time. But I'm still game to overlook it if this story resolves in a satisfying way, like if she assassinates guest star Mark Gatiss and prevents him from writing more Doctor Who episodes (I'm just kidding, I don't advocate the death of Mark Gatiss. Only of the part of him that writes Doctor Who scripts). 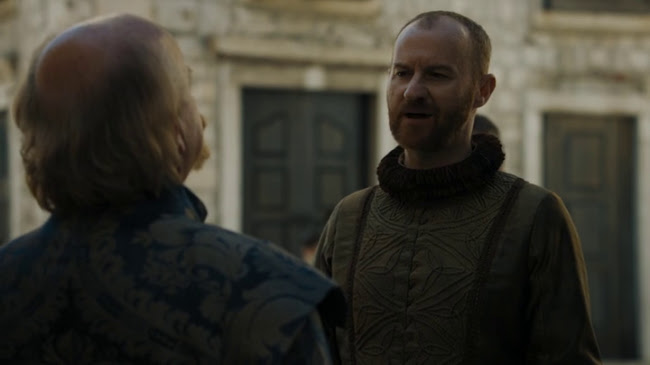 I wonder if Arya will actually be allowed to carry out a simple, straight forward revenge killing on Meryn Trant. Based on her luck so far, my money would be on "no", or if she she does it'll end up being a mercurial victory of sorts, like killing him somehow causes Sansa to be killed or something. At the very least, she'll probably be expelled from assassin school.

In Dorne, meanwhile, those of us spoiling for some Alexander Siddig action were finally rewarded with his longest scenes of the season yet, though it still doesn't amount to much more than a taste. But at least it's a tablespoon rather than the teaspoons we've gotten all season. Good old Dr. Bashir. 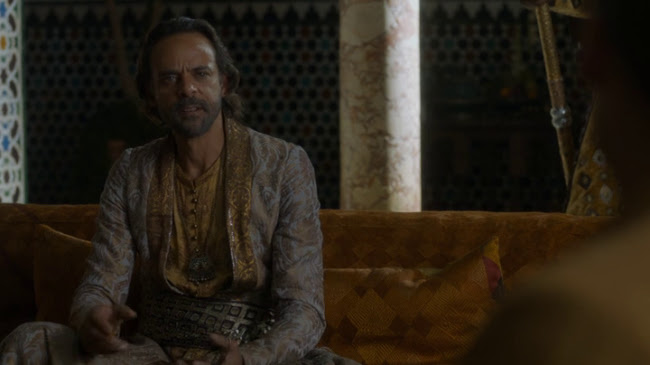 And what a lovely location.

He seems like an actually nice guy and appropriately enough he seems psychologically tortured. He's in a wheel chair, too, so I guess he won't be leading any twenty man raids on enemy camps.

Speaking of weirdly talented antagonists, the big set piece this time was the opening of the fighting pits where three extraordinary things happened. 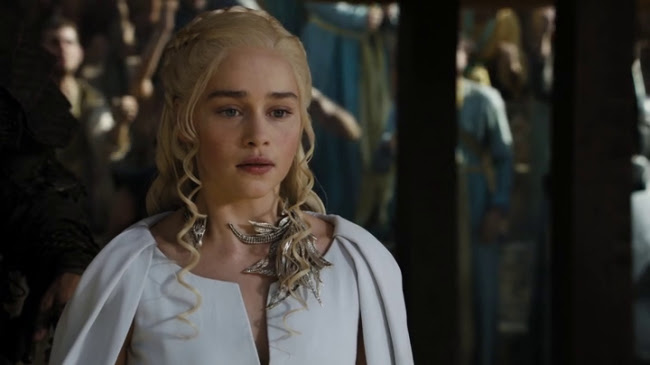 Jorah shows up as one of the fighters and is suddenly not half the fighter he was two weeks ago when he defeated six men without killing them. Then around 40% of the crowd brings out gold masks and starts overpowering Daenerys' spear-wielding Unsullied with knives. If these guys really are the former slave masters they must have undergone some kind of insane training programme ever since she easily took over the city. 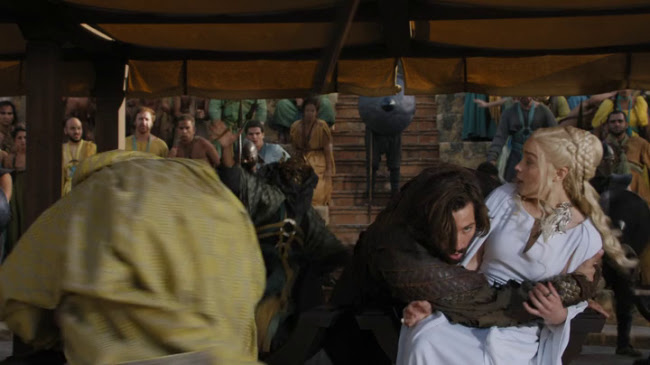 And, finally, the moment I think we all knew was coming but were really pleased to see it anyway, Drogon Dragon shows up and starts roasting the fuckers. I kind of liked that it still wasn't completely one sided, that the dragon seemed to be sustaining real injury from the Sons. Though, again; who are these guys? Maybe we'll learn they're a sect of elite martial artists who live in the mountains only to be called down when the slave masters are in direst need. Or something like that. It could work. 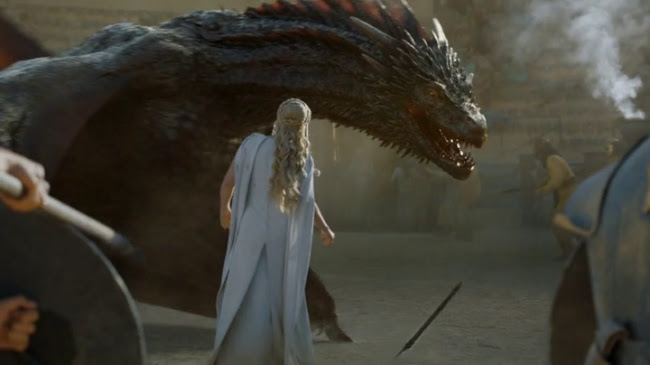