The Satisfaction of Killing

I still remember the world outside my apartment though the memory grows faint--I've been in here reading again for days. But I have taken some breaks from reading things from 17th century. Last night I read the new story in Caitlin R. Kiernan's Sirenia Digest, Le Meneur des Loups, about a gathering of werewolves apparently at least partly inspired by this illustration by Maurice Sand: 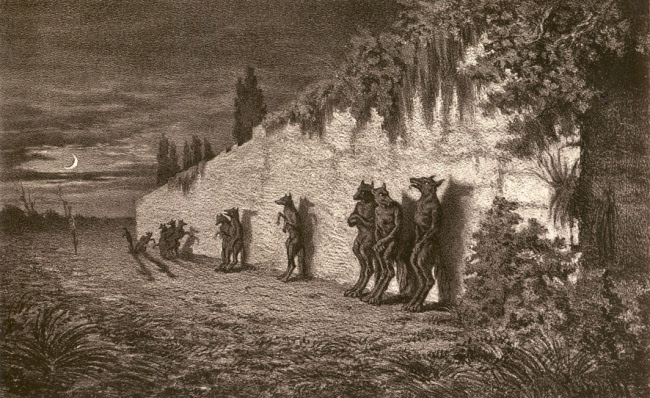 This is an illustration I first saw when I was a kid in a book called Meet the Werewolf, essentially a text book on werewolves aimed at children including folk tales, general characteristics of the creatures, and some information on people with diseases that may have inspired werewolf legends, like hypertrichosis. I still have my copy of Meet the Werewolf, a worn out little paperback now--when I was in third or fourth grade I read the thing beginning to end over and over. So I was happy to see the illustration again.

Le Meneur de Loups tells of several people affected with lycanthropy who have gathered in a house to share stories and obtain some mysterious form of aid from a knowledgeable woman. The piece consists mainly of character descriptions of each werewolf--an unsuccessful ballerina, a man from Sierra Leone who won't admit to eating people, a young woman inspired by "Slender Man" tales. It's interesting how each character's personality possibly reflects the nature of the curse and their own interpretations of what it means are revealed with nice subtly.

I also took a detour to the nineteenth century a few days ago to read the final issue of Django/Zorro. 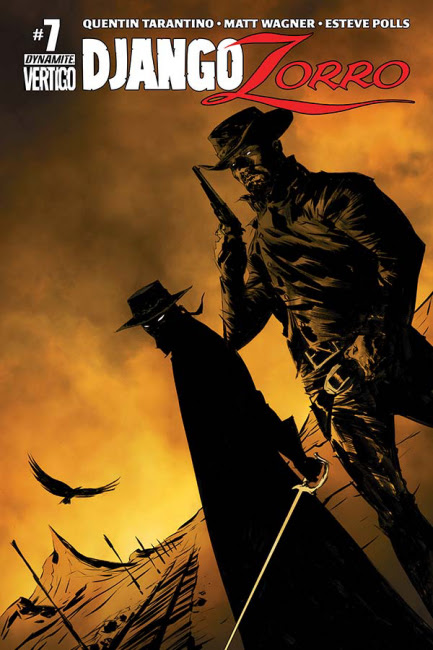 Since the life had seemed sapped out of the series by Issue Five, Issue Six had sat unopened next to my computer for weeks before I finally got around to reading it. I was sure glad I did, though, because quite abruptly that old Django charm was back--which I took to mean Tarantino was back. It's hard to imagine in the meandering previous issues a line as strident as "Y'see . . . some sonsabitches just need killin'!" followed by Django doing exactly what we look for him to do.

Issue Six also picks up the good subplot about the essentially imprisoned wife of the Arizona baron and her love affair with the baron's son. Seven is a very nice continuation and conclusion.

Zorro actually ends up feeling pretty superfluous except in scenes where his old fashioned preference for avoiding bloodshed is contrasted with Django more than willingly exacting bloody vengeance. Maybe that's not so surprising, not just because I'm guessing Tarantino handled most of the Django stuff while Matt Wagner was on Zorro duty. Django as a character is simply more of our current current culture where revenge killing is seen as more and more reasonable. Or, if not in practice, certainly in fantasy. Even to people who aren't psychopaths, fantasising about killing can be pretty satisfying, ultimately much more satisfying, I suspect, than the real thing.

Posted by Setsuled at 4:29 PM
Email ThisBlogThis!Share to TwitterShare to FacebookShare to Pinterest