Just One of Those Angelic Devils 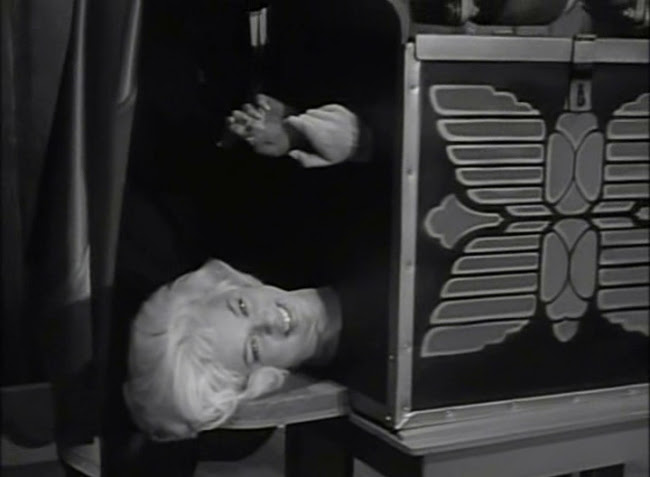 The first, a thirty minute 1961 episode called "The Sorcerer's Apprentice", is the more interesting. Written by Robert Bloch, the gruesomeness of its featured murder proved too great for the censors and it was not broadcast during the series' initial run. Dors plays an assistant to a magician working at a carnival. A mentally impaired young man she rescues wakes up in their trailer and assumes she's an angel and the magician's the Devil. 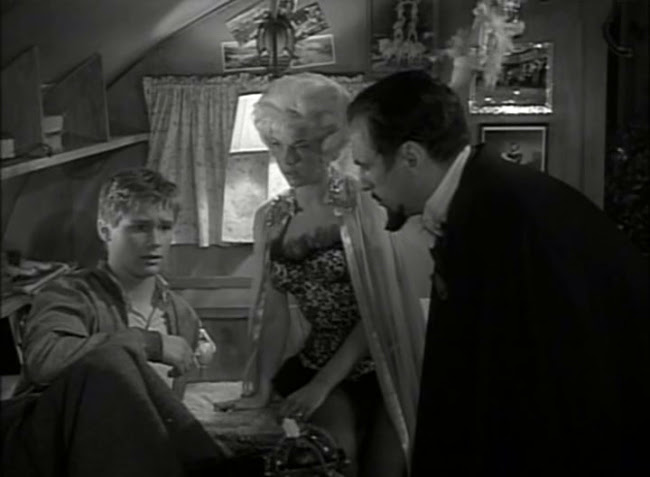 It works out to be a fairly unambiguous anti-religious allegory as at first Dors' character is reluctant to accept the young man's vision and then she decides to exploit it. She might have done well remembering the course for those who claim to be God's representatives on Earth doesn't always run smooth. Implicit in the story is a comparison of religion to a magic trick and the wondering trauma the young man experiences seeing Dors getting sawed in half isn't far from a rapturous contemplation of the crucifixion.

The second episode Dors appeared in was two years later, in 1963, "Run for Doom", an hour long story and a pretty standard noir setup--a young man falls in love with a beautiful singer who ends up being in it for his money. Though she does tell him this up front and really no one comes off as a half-way decent person. Except maybe Dors who we at least have some sympathy for when we learn she has had one long term relationship with a physically abusive pianist who takes her back every time she runs off for another short romance. Dors sings twice in the episode, standards "Just One of Those Things" and "How Long has This Been Going On?" thankfully instead of faux-standards written for the episode. It's a rare chance for audiences to see Dors actually was a very good singer: