To-day in My Spider Country 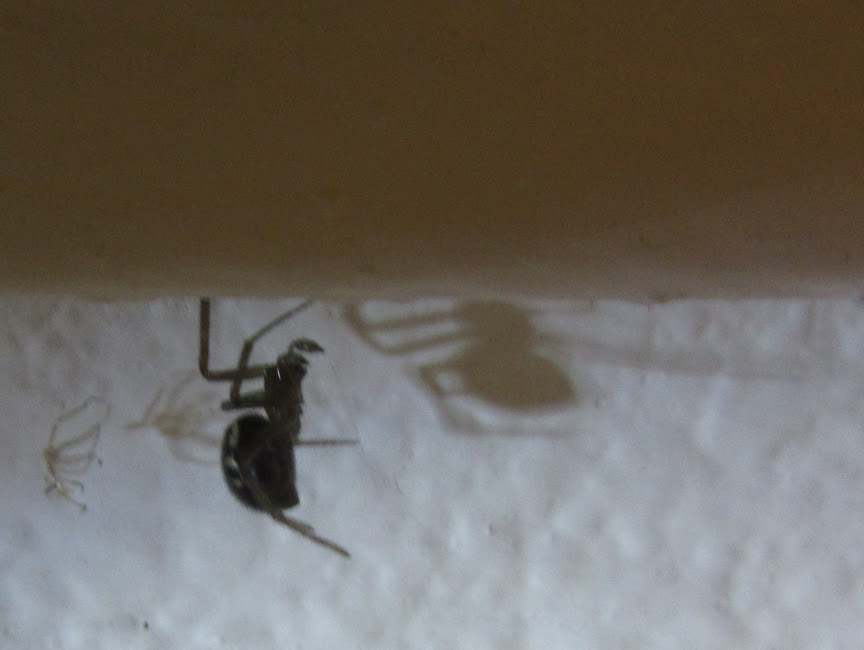 I've watched this spider grow fatter over several months where she lived in the area under my hat rack and behind one of my bookcases. Unlike most of the other spiders in my apartment, she flees and goes into hiding usually when I get too near. Yesterday I found that for the first time she'd moved to a position next to the door. I don't know why. There was a smaller, similar spider nearby. A male? An offspring? To-day I saw she'd moved back to her normal spot and there was a web across the little entrance hall at about my nose level. Naturally she couldn't walk back on the floor.

Every now and then I notice a barely visible network of webs just above my head. There was even one over my shower that lasted a surprisingly long time. Though there hasn't been a lot of steam lately since I take cold showers whenever I can get cold water now. Yesterday, as I mentioned, was 100 Fahrenheit again. I'm not sure which news story I've read this morning is more seductive--NASA's plans for a permanent human settlement on Mars or the station in Antarctica where scientists have been hitting the booze too hard.

A centrifuge's gum is gambled first.
Rickety Facebook breaks its bloomin' back.
A plastic bottle dies of soapy thirst.
In Santa's mind there's no abated sack.
A voyage made through cartilage is soft.
Reserved for things not strong as bone we frame.
The wobbly person shaped tin foil croft
Has earned its drifting spider cellophane.
A living tinsel inches up the walls.
Someone's announced a party line haircut.
Beehives and pompadours circuit malls.
It's Bruegel's phone we see in dark woodcut.
A tree like Daphne plays with botany.
An oaken plank has sparked Ent mutiny.

Posted by Setsuled at 12:17 PM
Email ThisBlogThis!Share to TwitterShare to FacebookShare to Pinterest