One typical solution to a love triangle in melodrama is to have one point of the triangle die, often heroically. What happens if you apply the same logic to a love octagon? You're going to have a lot of dead, heroic people, as demonstrated in 1966's Black Tight Killers (俺にさわると危ないぜ, literally "The Danger and Touch of Men", a stylish gangster ninja film that falls into an obtrusive pattern that is both disappointing and intriguing. 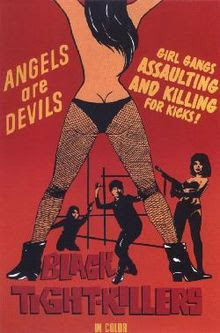 The film's fabulous poster seems to promise a Japanese version of Faster, Pussycat, Kill! Kill! but the influence is more James Bond as the film follows a male protagonist, Honda (Akira Kobayashi), as he makes his way through night clubs and bizarre, complicated villain lairs. In one scene, a pair of dancers painted gold reminded me of Goldfinger and immediately the scene cut to Honda observing to some other people at his table that the dancers are taking a risk because with their skins fully painted the skin can't breathe, the same thing that killed the victims of Goldfinger (this won't actually kill someone, by the way).

Unlike James Bond, though, Honda is on a mission to save his one true love, a pretty, innocent stewardess named Yuriko (Chieko Matsubara). Both the Black Tight Killers, a gang of ninja women, and a gang of American and Japanese war veterans want her. Why isn't exactly clear, it seems to have something to do with a hidden stash of gold that belonged to her father.

For some reason, the Black Tight Killers treat Honda like their enemy. One of them asks him into bed with her and traps him with what she calls a ninja technique, the "Octopus Pot", apparently using her vagina to hold his penis. As if the Killers' motives weren't ambiguous enough.

Honda escapes by throwing a laughing gas bomb, to make the woman's muscles relax, as he explains to his ninja teacher (Honda is also a ninja) played by none other than Bokuzen Hidari.

In case you were wondering if there's a movie where one of the stars of Seven Samurai discusses the use of a vagina as a ninja weapon, here it is.

After this, Honda runs into other Black Tight Killers one by one, at first as an enemies, then as reluctant allies against the male gang, and then as a pair of tragic lovers as the Black Tight Killer dies in Honda's arms, telling him how glad she is she's met him and what a good guy he is.

There comes a point where it really seemed like Honda ought to have remarked on how odd it was this story kept playing out. I'm not sure if director Yasuharu Hasebe was making a conscious point about formulaic story telling though, especially considering Seijun Suzuki was his mentor, it's certainly possible. Though nothing in the performances indicates this story is meant to be taken ironically, the repetition, and the characters' lack of acknowledgement of it, is hard to ignore.

Like a Seijun Suzuki movie, the film's aesthetics are good, filled with Dutch angles of Go Go dancers, dreamlike, overlaid images, and vivid, Expressionist use of colour.

Posted by Setsuled at 11:45 AM
Email ThisBlogThis!Share to TwitterShare to FacebookShare to Pinterest