The Mask Behind the Mask 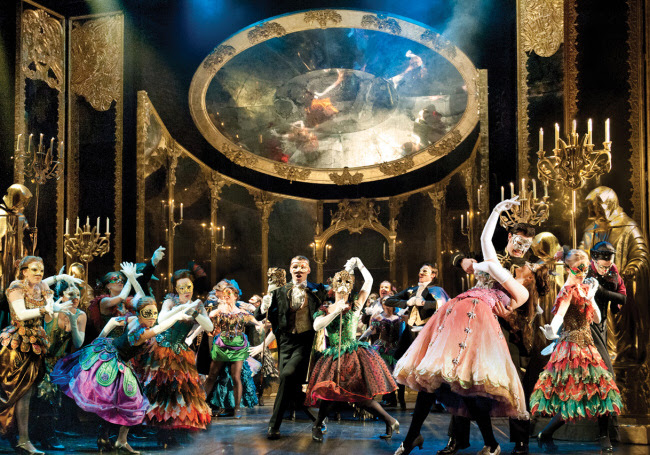 Well, in case you hadn't figured it out, yesterday's post was also my midterm for my Milton class. I ran out of time to make a separate blog entry here and there were formatting problems on the school site where the assignment was supposed to be uploaded so I cross posted it here. I spent more time than I meant to on it, reading through C.S. Lewis and William Empson and Percy Shelley all day and then I just barely managed to get to a showing of Phantom of the Opera I'd bought a ticket for earlier this year to see with my parents, sister, and brother in law. It occurred to me that writing an essay on Paradise Lost and then immediately afterwards seeing Andrew Lloyd Webber's Phantom of the Opera is a bit like studying The Odyssey and then going to see Clash of the Titans. Certainly the Phantom is modelled on the Satanic Hero after the Romantic's conception of Milton's character. The Phantom's opera-within-a-musical, Don Juan Triumphant, even recalls Lord Byron's Don Juan which, along with Manfred, really crystallised Romanticist theory on Milton's Satan to create the Byronic hero. Wikipedia tells me "Don Juan Triumphant" was originally the name of a song the Phantom wrote in the 1909 novel that Andrew Lloyd Webber created a larger place for in the story.

The original tale of a disfigured man living under an opera house seems more in line with stories reacting against the Byronic hero like Frankenstein or Moby Dick but Lloyd Webber brings it back full circle by emphasising a rock star quality to the phantom and heightening chemistry between Christine and the Phantom. It's even hinted that the Phantom and Christine eventually end up together since the play opens with the Phantom's rival for her affections, Raoul, evidently abandoned and heartbroken.

I liked the musical a lot when I was a kid, with Michael Crawford and Sarah Brightman in the lead roles, this new production by Cameron Mackintosh is still a lot of fun. The set designs are really good, particularly during the masquerade ball in a mirrored hall which looked like it was modelled on a Degas painting. Katie Travis as Christine, a ballerina who becomes singer in this version, was pretty good though rather like a Disney Princess. With Elsa in Frozen being Satanic Hero, maybe that's not inappropriate.

Unfortunately, the most crucial role, the Phantom himself, was given to someone named Chris Mann whose singing was so academic and utterly devoid of emotion it was like seeing a teenage amateur. Never does one think he could hold any sex appeal for Christine and he displays a corresponding lack of interest in anything but hitting notes. The "Music of the Night" scene falls totally flat where it was supposed to be selling the character to us.

But, aside from the most important aspect, it wasn't so bad.

The blank yet ricocheted off clear bulkheads.
Defamed the fortune teller grasped a card.
The wand allayed magician night urged dreads.
A kiss from man's contractual film's unmarred.
A rubber ring unheard hits warped tiles.
Distressed adhesive lost its hold of floor.
A riot's page discarded self files.
The clever multitude has jammed the door.
Unstirred the golden mirror mists for shapes.
A hat, a shadow, quick diverged from glass.
The legless pit for bright sapphires gapes.
A ghastly god of gems has choked the pass.
A ladybug astride Falstaff ascends.
The opened book library best amends.