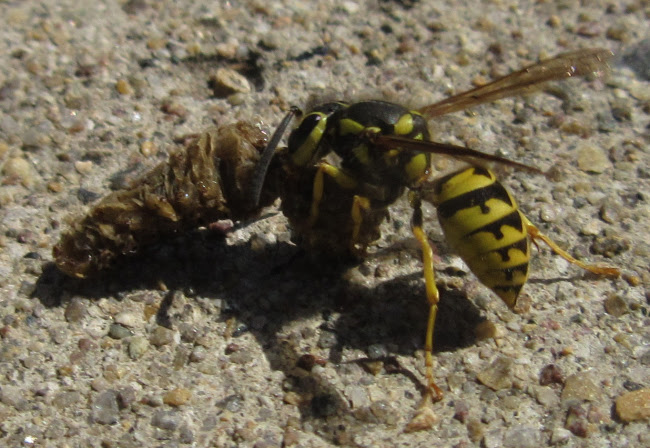 I saw this yellow jacket a few days ago pushing something around I couldn't identify. Maybe part of a nest. 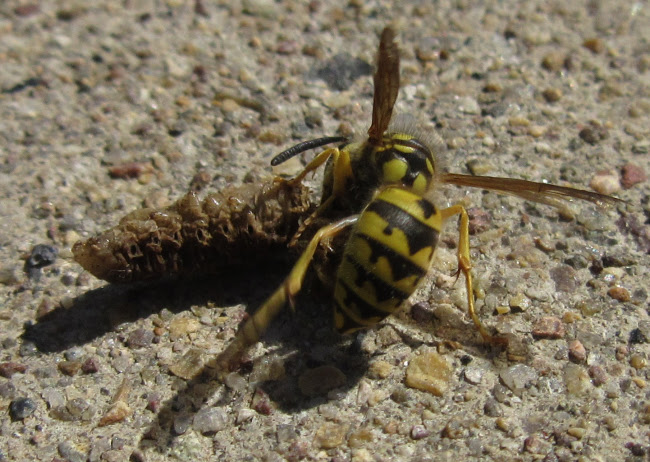 I'm so sick of the heat. It was supposed to start cooling down but it was over 100 Fahrenheit again. I had to finally do my laundry anyway in the laundry room like a furnace. Afterwards, I went out to lunch to enjoy a blessed hour or two of air conditioning. I took my lap top but forgot to bring any of the files I need and I need to write two essays to-day. I may go out again even though it's cooled to 90 here.

For my Milton class, the professor asks his students to make weekly blog entries on a school site about the weekend's reading. Because the heat is killing my verve fast, I'm just going to copy and paste here what I wrote about Milton to-day, specifically on the subject of Milton's God as portrayed in Paradise Lost.

My favourite portrayal of the Christian God in cinema of the past fifty years is in Raiders of the Lost Ark. One of the reasons it remains the best Indiana Jones film is that it sets up a dichotomy between the overpowering, deadly force of God and the vulnerability and clumsiness of humanity by contrast. For all the Godly power shown in the film, nowhere is there a hint of conscious benevolence. People usually assume Indy and Marion are saved at the end of the film because they're good people and the Nazis are bad. But what if they were saved just because Indy and Marion shut their eyes and the Nazis didn't? Well, an impatient movie goer might brush this aside and say it works out to be the same thing. Indy and Marion knew to show humility, the Nazis didn't. But if God is all about punishing the evil and saving the good, why didn't he kill the Nazis sooner? A question that leads us to wonder why would God allow the Nazis to exist in real life and even further to question why evil exists.

Actually, I also really like Ralph Richardson's portrayal of God in Time Bandits and it's Richardson's voice I tend to hear when reading God's lines in Paradise Lost. Especially lines like this:

Freely they stood who stood, and fell who fell. Not free, what proof could they have givn sincere Of true allegiance, constant Faith or Love, Where onely what they needs must do, appeard, Not what they would? what praise could they receive? What pleasure I from such obedience paid

And yet again we have Milton's own opinion on free will, the necessity of knowing evil, similar to his ideas expressed in his masque commonly called Comus and his pamphlet against requiring licensing for publications, Areogitica. One might argue that, if Milton was consciously siding with Satan in the first two books, he's certainly siding with God now. Except Satan points out a problem with this in observing Paradise:

One fatal Tree there stands of Knowledge call'd, Forbidden them to taste: Knowledge forbidd'n? Suspicious, reasonless. Why should thir Lord Envie them that? can it be sin to know, Can it be death? and do they onely stand By Ignorance, is that thir happie state, The proof of thir obedience and thir faith?

If God believes in the importance of knowledge, why would he explicitly forbid it to Adam and Eve? My feeling on this, from Genesis, has always been that God wanted the humans to have something to feel guilty about once they did have knowledge. It makes God more frightening. Sure, an all mighty being is scary enough, but how much scarier is he when you know you've done something he told you not to do on pain of death?

Which leads me to C.S. Lewis and his critical piece Preface to Paradise Lost. "Many of those who say they dislike Milton's God only mean that they dislike God," Lewis says in a line that's also quoted by William Empson in his book Milton's God. And, as Empson points out, this is perfectly true and results from a misconception of the Christian God that suggests to me that very few self-proclaimed Christians have actually read the bible. God's wrath in the bible is pretty horrific. One could debate how much free will meant to God when he killed all the first born in Egypt. Lewis also goes on to say that God's love "by its very nature, includes wrath also." Wrath is a sign of love to Lewis and it goes hand in hand with the majesty of mystery in a line describing God from Paradise Lost praised by Lewis: "Dark with excessive bright thy skirts appeer." Like the "darkness visible" of Hell we see a light that is somehow also darkness. It's no wonder that Lewis chose for his own representation of God in his Narnia books a lion, a creature who inspires awe largely because of its inherent deadliness.

Empson goes even further on the subject of this majesty of deadlines and contradiction, ". . . the poem is not good in spite of but especially because of its moral confusions, which ought to be clear in your mind when you are feeling its power. I think it horrible and wonderful; I regard it as like Aztec or Benin sculpture . . ." Benin sculpture being the sculpture of Vodun. In a somewhat badly written but informative book on the subject called African Vodun by Suzanne Preston Blier, the sculpture of the part of West Africa containing Benin is described, "Features of force, fear, shock, fury, disorder, and deception, in sum, play a critical role in [the effect of the sculpture]. These criteria in turn have a role in effectuating particular types of viewer response--be it of mystification, danger, or awe." This indeed might describe Milton's God.

There's a song by Nick Cave which takes its name from a line in Paradise Lost, Book II, where Belial speaks in fear of God's wrath:

Awak'd should blow them into sevenfold rage And plunge us in the Flames? or from above Should intermitted vengeance Arme again His red right hand to plague us? what if all Her stores were op'n'd, and this Firmament Of Hell should spout her Cataracts of Fire, Impendent horrors, threatning hideous fall One day upon our heads