I listened to three momentous Doctor Who audio plays this past week--The Girl Who Never Was from 2007 and The Bride of Peladon and The Condemned from 2008. The Condemned follows The Girl Who Never Was chronologically for the companion Charley (India Fisher) but not for the Doctor--she leaves the Eighth Doctor (Paul McGann) in the first story and starts travelling with the Sixth Doctor (Colin Baker) in the second, a significant downgrade for her on a variety of levels. But both stories are nicely written. though the Eighth Doctor story is easily superior.

Featuring Danny Webb, McGann's costar from the soon to be kicked from continuity Alien 3, as a mercenary that manages to charm Charley, the story seems to have been the inspiration behind the arc in the Twelfth Doctor's first season where Clara is fed up and wants to leave the Doctor but they decide to have one last, farewell adventure. In this case, though, Charley is fed up with the Doctor because of his cold attitude to the death of their mutual friend. This is a theme that's carried over in the other audio dramas released around the same time for the Fifth and Sixth Doctor with the line, "Everybody leaves." The Girl Who Never Was also has Anna Massey in a supporting role. The plot is an interesting, threatening time paradox--also introducing the idea that the Doctor doesn't feel any different about a companion based on her apparent age--but it's mainly entertaining for some exceptionally snappy dialogue by Alan Barnes. I liked a bit where a mechanical captor tells Charley and her fellow prisoners that their conversation is irrelevant and Charley responds, "Than you don't mind if we talk."

Having a companion move backwards through a Doctor's history, without being all over the place like River Song, is an interesting idea. I'm wondering how they'll eventually address the fact that the Eighth Doctor doesn't recognise her when they meet in Charley's first story. Already in The Condemned, I was disappointed by Charley's failure to ask certain questions. She doesn't seem to wonder if Six is a past or future incarnation of Eight. Maybe she's not even sure he's the same person, the story leaves a lot of area to cover. But the main plot is a really nicely eerie story about Charley being kidnapped by a young woman in Manchester and being held in a flat where light seems to be disappearing and a mysterious man keeps calling on different phones, saying he's trapped in the basement.

The Bride of Peladon features the Fifth Doctor (Peter Davison) and Peri (Nicola Bryant) and it marks the final story of the audio companion Erimem (Caroline Morris), the pharaoh from ancient Egypt. I'll miss her; she was very good, especially when the writers remembered to write her as a ruler from an ancient, brutal culture. I think my favourite stories with her were Nekromanteia and Son of the Dragon, both stories that were decidedly less kid-friendly than Doctor Who tends to be.

And of course, The Bride of Peladon returns to Peladon, the place visited on television twice by the Third Doctor in The Curse of Peladon and The Monster of Peladon. Like those first stories, this one mainly involves court intrigue and of course the Ice Warriors and the genderless Ambassador from Alpha Centauri, a character whose concept might have been more surprisingly progressive if the other characters could finally agree on their pronouns and their design didn't accidentally turn out to resemble a giant penis. 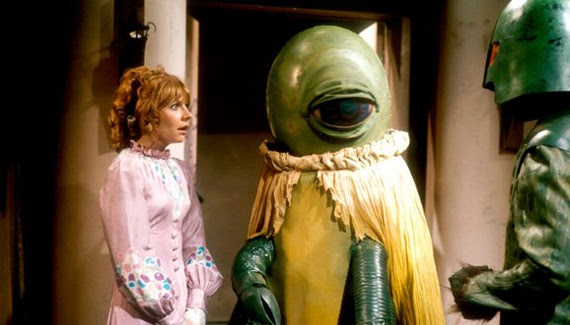 The Bride of Peladon begins with a pretty unambiguous Hamlet reference as the current prince is visited by the ghost of his mother, informing him she was murdered and demanding vengeance. But things drift away from there and while it is oddly entertaining hearing Peri buddy up with an Ice Warrior it's not one of the best written stories--somehow, when a prophecy demands the blood of a royal sacrifice, no one thinks that Erimem might be in danger.