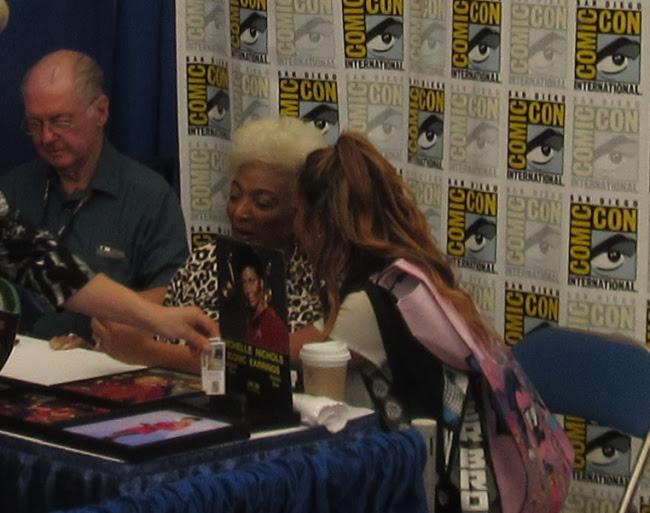 Two days, I saw Nichelle Nichols in the autograph area with only about five people around her. You wouldn't think this was the big Star Trek 50th anniversary Con. I don't see why Nichols wasn't on the big Hall H panel, which I didn't see, though not because I wasn't interested. Just as I thought, the whole thing ended up online anyway but I heard about Bryan Fuller using an unusued 1970s Ralph McQuarrie Enterprise design for the new show's ship, from Mark A. Altman author of several books on Star Trek, when he couldn't help gushing about the announcements when I saw him on another, much smaller panel.

I saw one Star Trek panel this year. This year, there were several panels spread out on various days in various rooms called Inside the Writers Room that gathered groups of writers to discuss aspects of the process and business. On Friday I saw the Inside the Writers Room focused on former writers for Star Trek. Moderated by Altman, the panellists included David Weddle, who wrote for Deep Space Nine and now works on The Strain; Robert Hewitt Wolf, who worked on Deep Space Nine and now Elementary; Michael Sussman, who worked on Voyager, Enterprise, and now Perception; Fred Dekker, who worked on Enterprise and he wrote the 80s movie The Monster Squad; Naren Shankar, who worked on The Next Generation and is now showrunner on The Expanse; and Ronald D. Moore--of TNG, DS9, the new Battlestar Galactica and currently showrunner on Outlander. I thought about asking him if there would be any upcoming group of three episodes without an attempted sexual assault. Moore did say he was frustrated with the limitations imposed on the subject matter he was allowed to explore on Deep Space Nine, I wonder if he envisioned the Attempted Rape of the Week format that now distinguishes Outlander.

As much as a rut as his current show seems to be in, though, Moore has written some of the best episodes of Star Trek and I loved his Battlestar Galactica. He and Shankar were the two writers I was most interested in hearing from. 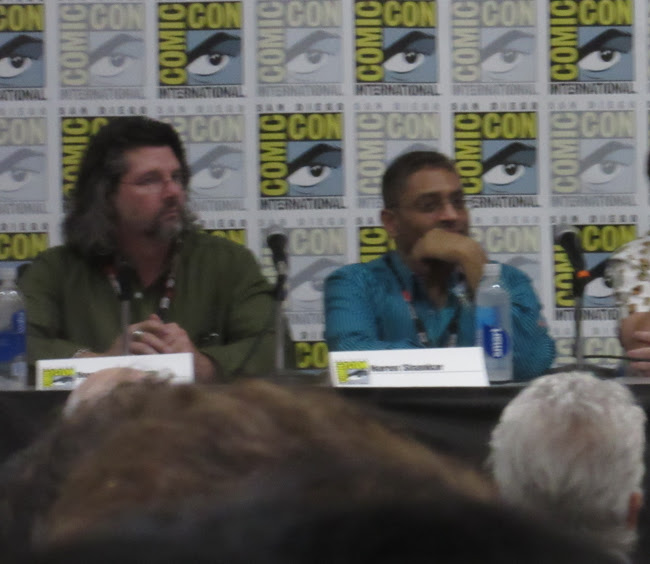 Sussman said working on the fourth season of Enterprise was the most fulfilling time of his career because the execs stopped giving a fuck. Shankar mentioned that he also used several ideas on The Expanse which he first had while working on Deep Space Nine. In talking about how DS9 was a precursor of modern serialised television, Shankar said the old self-contained format allowed the writers to write wildly different kinds of stories for one show. Robert Hewitt Wolf seemed to miss being able to change things up but said how writing murder mystery episodes of DS9 were a good early experience for now writing on Elementary.

When the panel were asked how they got their jobs writing for Star Trek, Hewitt Wolf said he got a masters degree in screenwriting and then didn't find work for five years. He tried to sell a script for an episode about the Watts Riots but finally got a script approved, "A Fistful of Datas", when he was working on the show as an intern. Those who remember that lousy western pastiche holodeck episode might agree with me that his degree should be rescinded.

Moore got his job through his girlfriend who worked on the show. Of the panellists, only Fredd Dekker, who had Hollywood movies under his belt, was hired through his agent and wasn't required to pitch.

Dekker used a term that sounded like it was familiar from writers' rooms and producers, "Care and feeding of franchise" when he talked about the limitations Moore and Shankar mentioned on the kinds of stories they could tell. The panellists agreed that Deep Space Nine ushered in a new era of serialised television--no-one mentioned Babylon 5--though Hewitt Wolf said Hill Street Blues was the true originator of the format. I guess ignoring soup operas, Doctor Who, and various anime series.

Moore said the reluctance to switch to a serialised format was due to the fear that people would tune out if they missed crucial episodes and got lost. Serials can flourish now that people can binge watch.

Nearly everyone cited the book The Making of Star Trek, which was published during the original series' run, as a major influence for getting into the business.

Along with Rick Berman, the late Michael Piller was showrunner on Star Trek: The Next Generation in its defining years. When asked to comment on Piller, Moore said he was "a unique man";"guileless" and "with no filter". He would criticise a script quite casually to a writer's face without seeming to feel any remorse about it. Moore said Miller believed in the process and the writers' room. He said Miller gave a lot of writers their first shots.

Shankar said Miller brought discipline to the show, wanted little hierarchy and encouraged people to voice their disagreements. Shankar said he was "like a laser beam" adding that the lessons he learned from Miller he carried to other series he worked on.

Posted by Setsuled at 2:35 PM
Email ThisBlogThis!Share to TwitterShare to FacebookShare to Pinterest