"Tho' Modesty is a Virtue, Bashfulness is a Vice" 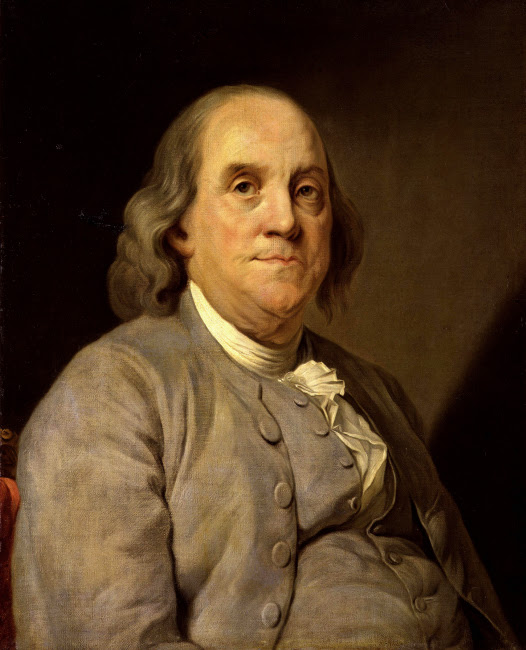 This seems like as good a day as any to defend Benjamin Franklin. Against whom? Tories? Slave owners? No, I'm going to defend him against Laura Fraser. Not the Scottish actress from Breaking Bad and Neverwhere but another Laura Fraser who I can't find online but she wrote an essay called "The Inner Corset: A Brief History of Fat in the United States" I was required to read for a class I recently took on Women's Sexuality. The essay gives a history of the fluctuating fashionability of fat and implies that rhetoric which casts fat in a negative light--in terms of aesthetic or health--is part of a propaganda campaign to sell weight loss products or is a reflection of classism.

Americans believed that it was not only a sign of class to be thin, but also a sign of morality. There was a long tradition in American culture that suggested that indulging the body and its appetites was immoral, and that denying the flesh was a sure way to become closer to God. Puritans such as the minister Cotton Mather frequently fasted to prove their worthiness and to cleanse themselves of their sins. Benjamin Frankin, in his Poor Richard's Almanack, chided his readers to eat lightly to please not only God, but also a new divinity; Reason: "Wouldst thou enjoy a long life, a healthy Body, and a Vigorous Mind, and be acquainted also with the wonderful works of God? Labour in the first place to bring thy Appetite into Subjection to Reason" (Franklin, 1970, p. 238). Franklin's attitude toward food not only reveals a puritanical distrust of appetite as overly sensual but also presaged diets that would attempt to bring eating in line with rational, scientific calculations. "The Difficulty lies, in finding out an exact Measure;" he wrote, "but eat for Necessity, not Pleasure, for Lust knows not where Necessity ends" (p. 238).

I can hardly say derisive attitudes toward weight are not manifested in classist attitudes after watching The Neon Demon last week. I don't think it's rational to suggest being fat is a reflection of bad or weak character. After all, I admire a fat man named Benjamin Franklin. And friends of mine who fluctuate between fat and thin due to dieting generally seem happier when they're not dieting and my friends happy and fat look a lot better to me than my friends miserable and thin. But my use of the word "rational" a few sentences ago implies that I think being rational can be positive. Fraser framing Reason as a "new divinity" is characteristic of several of the readings that were required in Women's Sexuality.

When I signed up for the class, I had no real idea of what the class would entail, I only knew that it was included on a list of possible classes I could take to satisfy an "explorations" requirement. It wasn't until the end of the course that we got to things I might have expected, like excerpts from The Vagina Monologues. A surprisingly large percentage of the class was given over to discussions of race and LGBTQ politics. I had nothing against reading about these things and I do think they're important subjects for students to discuss and to be confronted with. Maybe labelling the whole class "Women's Sexuality" is too restrictive, but maybe the professor was obliged to operate within an academic framework that did not allow her to choose her own labels. Certainly, these subjects were related to women and sexuality in some way. Though I wonder what kind of biases about women it suggests that these things can only be discussed under the heading of "Women's Sexuality" and not simply "Sexuality".

One section of the class involved discussing how science was used as a tool of oppression. I agree that bogus disciplines like phrenology are harmful to human beings but I was a little disturbed that pseudo-sciences were consistently referred to as simply "science". At the beginning of the class, the professor explained in unambiguous terms that the class philosophy was anti-religious, that religion was antithetical to feminism and social progress. The inclusion of a text that branded Reason as a "new divinity" and the language regarding science as being entirely subjective seems to indicate she included Reason and science as being among religions, an attitude I'd encountered before. A mythology class I took a few years ago included scientific theories like the Big Bang and human evolution among various cultural myths. This seems to be a growing misconception, perhaps related to the misunderstanding of the word "theory" as used in science. In general parlance, a theory has long been more like what science calls an hypothesis--an idea or inference based on some observation or experience. Science does not, like religion, claim this sort of thing to be true out of hand but rather uses it simply as a prompt for experimentation which then might lead to a theory, a theory in science being a summation of what an overwhelming amount of evidence indicates. Of course, bias can contaminate things labelled as theories--like phrenology--but failing to meet the demands of rigorous evidence makes these things by definition not science.

At the same time I was taking Women's Sexuality I was also taking Oceanography and I don't think I've ever had two classes at the same time that more explicitly, directly contradicted each other. Pollution was an important topic in Oceanography and connected to it was the topic of overpopulation. The exploding population of the past century and its continual, exponential increase poses dangers not only in terms of pollution but more broadly in terms of how many people the planet can support. In Women's Sexuality, one piece of evidence used to show that science was a tool of oppressors was a series of non-consensual sterilisations conducted on Mexican women in the 1970s by doctors in Los Angeles. It's suggested the doctors justified their actions with fears of overpopulation. It was implied that these fears are unfounded rather than arguing that targeting Mexicans for sterilisation was racist and certainly not scientific and that such sterilisation would have a minuscule and meaningless impact on global population growth. This is not an example of Reason as a culprit, this is a case Reason being absent.

Also, among many other accomplishments, Benjamin Franklin contributed to Oceanography and the material I read in Oceanography only had good things to say about him.

For the record, Benjamin Franklin was not a Puritan. His parents were and certainly philosophies of moderation and self-discipline can be traced to a Puritan influence. But still I use the term "Puritan" where maybe I shouldn't. The professor I had last year for the class I took on John Milton was against using the term as it was originally a pejorative applied in England to a wide range of Protestant sects who were dissatisfied with the monarchy and Catholic aspects in the Church of England. Certainly the rejection of tyranny and the embracing of toleration for other beliefs were some other "puritanical" qualities in Franklin's writings. And, I might add, discussions focusing on identifying "privilege", pursuing justice for marginalised groups, and dismantling hierarchy in the Women's Sexuality class I took--and in Social Justice rhetoric generally--could just as easily be traced to the Puritan Levellers or Diggers or even Oliver Cromwell. But so far there seems to be no steam for tracking Puritan intersectionality.

Here are few quotes from Benjamin Franklin on Reason:

Would you persuade, speak of Interest, not of Reason.

Force shites upon Reason's Back.

It's common for Men to give pretended Reasons instead of one real one.

Anger is never without a Reason, but seldom with a good One.

To-day I also read the new Sirenia Digest which includes Caitlin R. Kiernan's excellent new story "Whisper Road (Murder Ballad No. 9)". A wonderfully subtle, almost Hitchcockian exploration of a killer's preoccupations during, and reflected by, a mysterious supernatural occurrence. A very good story and just the sort I like, where internal feelings of responsibility and guilt are in harmony with an unknown and threatening force. A really lovely piece.