I Ain't Afraid of No Fear but Fear Itself 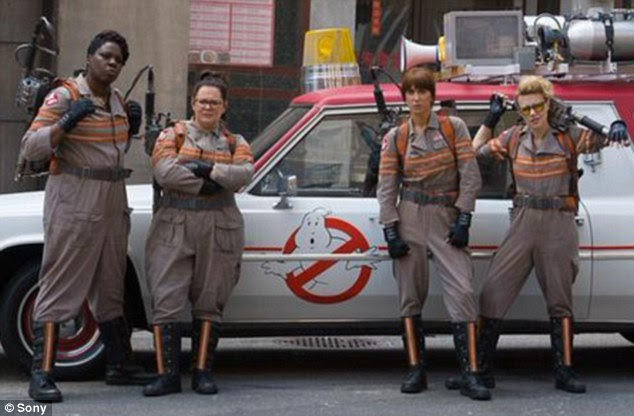 Paul Feig's Ghostbusters is about 30% Bridesmaids, 60% Joel Schumacher's Batman and Robin, and about 10% whatever wonderful entity Kate McKinnon is. She's fucking great in this. But mostly what Paul Feig has done for Ghostbusters is what Schumacher did for Batman, and I don't mean in terms of quality, though that's a factor, but in terms of camp. Like Schumacher with Batman, I think Feig went into this thinking the darker elements of the property aren't all that interesting and it's not what people are interested in when they go to see the movies. Feig and Schumacher thought, people want to see bright colours, silly tongue-in-cheek villains who play things way over the top, and, above all, threats that are so goofy and insubstantial everyone feels safe laughing at them. And they might be right, a lot of people might enjoy movies like that more than the kind of movie the original Ghostbusters was. The three drunk girls in the audience when I saw the movie, who sang along with the theme as they left the theatre, certainly seemed to like it and I don't begrudge them that.

And I enjoyed the Bridesmaids and Kate McKinnon percentage of the film. Kristen Wiig and Melissa McCarthy work well together as they did in Feig's earlier film, though now they're playing insecure academics, something Wiig in particular does well. Her scenes at Columbia University trying to hide her past as a writer of books on the paranormal from her boss (Charles Dance) are funny and in this respect alone the movie most matches the tone of the original film where the stars began at a university they're kicked out from after an adversarial relationship with the dean. But this similarity vanishes when McCarthy and McKinnon's characters are kicked from their university by a dean who does a prolonged shtick about giving them the middle finger. Like much of the film, it deliberate strays very far from realism in the situation. Albert Brooks in Scorsese's Taxi Driver asked the director to let him be funny not like a comedian is funny but like a regular cut-up at the office is funny, a decision that helps that film's sense of realism as Brooks makes dumb, fawning jokes about pencils and coffee mugs while a mildly besotted Cybill Shepherd reacts. In Feig's Ghostbusters, everyone is funny like a comedian from the apparently improvised backs and forths between McCarthy and Wiig to the hotel manager who tells the Ghostbusters he has what people have told him is a disturbing shriek.

It's all part of a very deliberate and successful effort to create an insubstantial reality for the movie. It's reflected in the sets and locations in contrast to the original film. The first film begins with the New York Library with a very credible plain interior. This movie begins with something that's more cartoonish than Disneyland's Haunted Mansion and a ghost from a painting that seems as though it's meant to mock the one from Ghostbusters 2 with its over the top scowl. The climax of the film has the villain coordinating a dance routine for a possessed crowd of police, officials, and onlookers in what looks like a candy coloured backlot putting me in mind of The Mask except campier. Instead of the realistically grimy fire house used as headquarters for the Ghostbusters in the first film, Feig's stars make their base in the surprisingly spacious and clean upstairs of a Chinese take out restaurant. The film has been banned in China due to references to the supernatural though I wonder if the fact that absolutely no Asian actors are in the film had anything to do with it. I like the idea of having them above a Chinese restaurant but its an idea whose potential is never realised. They never even do anything as simple as walk through the restaurant itself, we never see anyone eating there and the only employee we see is a delivery man played by a Middle Eastern actor.

It made me think about what was so extraordinary about the original film. The connexion the characters share to a very real feeling New York City is an enormous part of what makes the original work. The beginning of the film gives you no real hint that these guys are going to be heroes you root for so when at the climax a massive crowd of people gathered to cheer them, clearly actually in the city, it's actually really exciting because it's kind of unexpected even as it feels earned. The new movie features a lot of the characters cheering themselves on without real weight. This is unrelated to the camp aspects of the film and I think it might have been a better camp film if it had avoided any sincere attempt at making heroes.

I'm not alone in praising Kate McKinnon in this movie. Andrew Lapin at NPR says she resembles a young Bill Murray and I think that's right on the nose. I think her character was actually meant to be the Egon analogue but her acting style is much more reminiscent of Murray's with its relaxed flippancy and subtle, constantly simmering anger. There's a dare in her every line mixed with nonchalance. When an FBI agents asks them how many laws they think they've broken, McKinnon's character asks, "Is it one?" He says no, she says, "Is it two?" he says no again and she says, "Is it one?" again. The agent, played by former Daily Show correspondent Matt Walsh, is peevish and doesn't recognise that McKinnon's character is fucking with him. Camp is a form of irony, irony by nature subverts sincerity. McKinnon, like Murray, has a kind of irony that subverts irony to go back to sincerity again. Only a few performers are able to reach this perfect plateau--Tom Baker is the only other one that comes to mind. I would happily see a regular Ghostbusters movie starring her character.

I wonder if the tone of the film was always intended. There's scene where Leslie Jones' character goes on the subway track to say to a ghost, "Sir, you're not supposed to be down here." The ghost is glowing bright blue and floating in the air, the idea that someone would mistake him as a normal person who wandered onto the tracks is absurd which makes me think Jones, when performing the scene, was informed she was seeing what looked like a normal, living man. Which might have actually been scary and also closer to the original film's style of having both physical entities and the glowing, floating kind. Considering the track record Sony has had over the past ten years, I suppose I can't really say for sure this is a Paul Feig film as much as it is a committee film.