The Risks of Talking 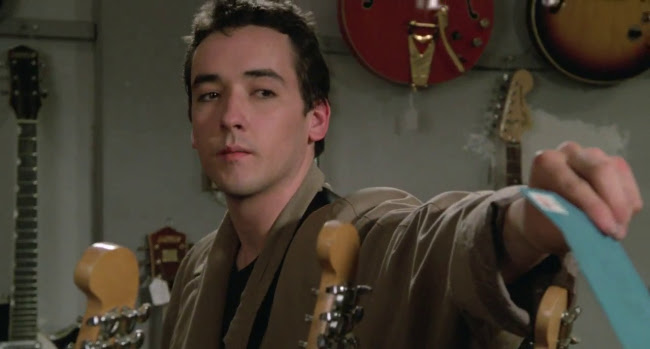 The more you trust someone, the more integral they become to your identity, both because you trust their decisions, and therefore they become, in essence, your decisions, and because you begin to believe in their impression of you. Trusting someone completely means, as the title of 1989's Say Anything . . . suggests, that you feel you can say anything to them and that they feel just as open with you. Maybe no two human beings were meant to trust each other quite that much or face the consequences of damaged self-image that comes when such complete trust is betrayed. Certainly the three central characters of Say Anything . . . have a pretty painful experience though as John Cusack's character proclaims at the beginning of the film, "I want to be hurt," maybe such pain is a necessary part of life. The film is good, its attention to this idea only sidetracked by interesting and entertaining portrayals of supporting characters.

At the party that Lloyd (Cusack) and Diane (Ione Skye) attend after their high school graduation are some of the most believable drunken high school students I've ever seen in a film. The guy who passes out sick in the bathroom, Eric Stoltz as a distracted host, the way everyone subtly works in disbelief that Diana agreed to go out with Lloyd in conversations with them both, all feel like they were crafted by writer and director Cameron Crowe with an extraordinary ear for how people actually talk. Corey (Lili Taylor) sings angry songs about her slimeball ex-boyfriend she's still obsessed with that are just the right kind of mediocre. 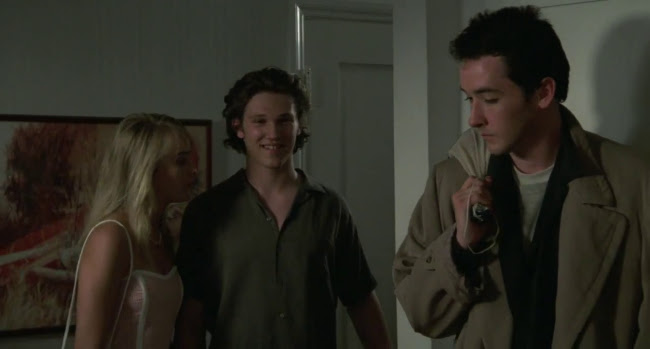 Diane is established as an unsociable academic, having no time for friends but having a great and deeply trusting relationship with her father, Jim (John Mahoney). It amazes Lloyd the first time he has dinner with the family just how at ease Diane and her father are with each other with none of the apparent friction or layers of resentment common between teens and their parents. Diane's social isolation is related to how well she's succeeded in school--the movie's vague about what Diane's actual passions and talents are, the principal at her school lists just about every subject but unfortunately Diane's genius never comes into play once during the film. She functions more as the centre of gravity between Lloyd and Jim. 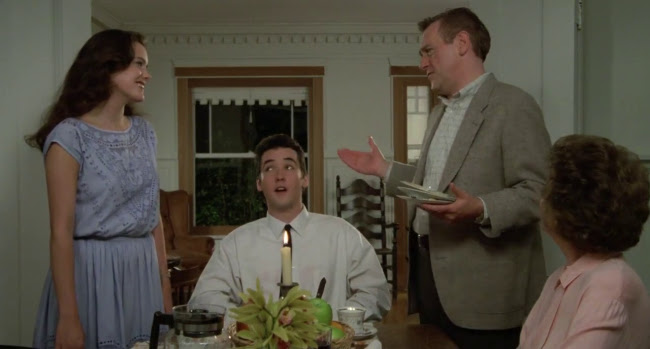 Which is not to say she's like a doll being tugged by two children on the playground. Her issues of love and loyalty and how they inform her motives are an active part of the film and in a scene where Lloyd feels like a scumbag because she seems to be rejecting him the scene is especially effective because both sides of the issue are clear. 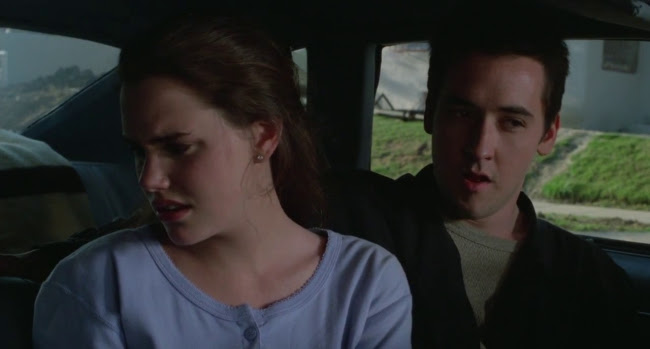 Lloyd, telling a group of guys how satisfied with himself and the world he felt when he thought Diane loved him, begins to doubt everything about himself because he finds his trust in Diane misplaced. These guys he's talking to, a random collection of losers hanging out by a convenience store, throw him the typical bullshit about how all women are the same and how one should use them rather than trust them. The scene is comical but it's actually a pretty good insight into how misogyny begins. Meanwhile Diane finds herself in crisis because she finds her father isn't quite who she thought he was. When he makes a surprisingly thought-provoking argument about his misdeeds the movie resists becoming a simple matter of the boyfriend versus the dad. It would have been nice if Diane had had a scene of similar insight but there's enough to her character to make this film a very effective character drama.