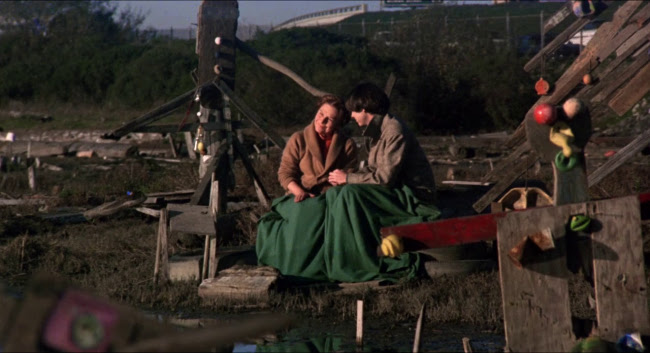 Harold (Bud Cort) is the son of a fabulously wealthy woman (Vivian Pickles), her endlessly disposable assets allowing Harold to buy whatever car he wants, whenever he wants, and stage elaborate fake suicides, much to his mother's annoyance. 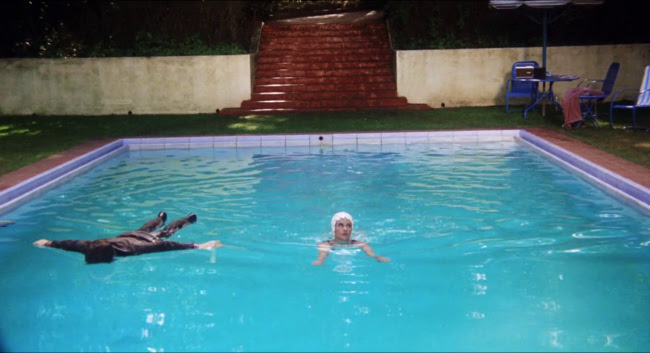 He also likes to attend funerals in his spare time--so does Maude (Ruth Gordon), and this is how they meet. Maude is 79 and wears bright colours all the time and she's obsessed with finding new stimuli at every moment. So why does she like going to funerals? It's not clear. Obviously it's so she and Harold can meet in a context outside his family and that somehow reflects the routine he chooses for himself. 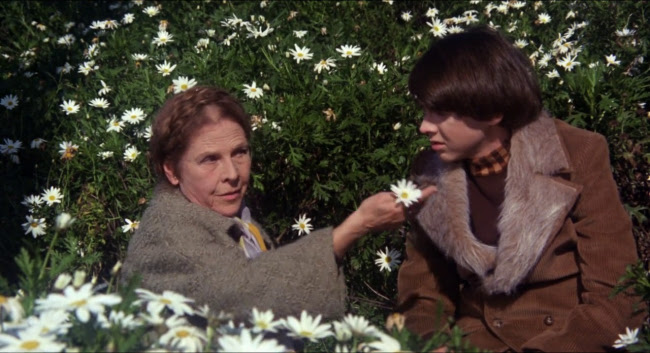 This is a story about Harold and Maude is there to facilitate that story. Harold's mother is played broadly by Pickles as cold and domineering but the advice she gives him, to break out of his funk, find something new to do and get a girlfriend, isn't actually that much different from what he finds so exhilarating about Maude. In an oddly prophetic scene, Harold's mother creates a profile for him in a computer dating service, unselfconsciously answering every question for him. The three women that turn up are insufferable to Harold because they don't get it when he pretends to commit suicide in front them. That is until the last one, an actress, who really seems to get into it, turning Harold's seppuku into the scene at the end of Romeo and Juliet. But he's already fallen for Maude at this point. 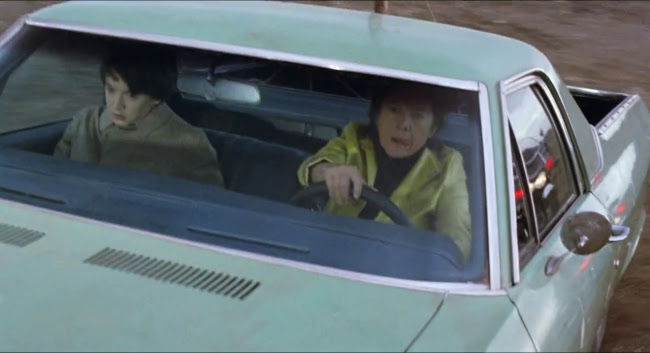 Maude has a magical set of keys that allow her to steal whatever car she wants and she and Harold go on joy rides. I guess, except for her age, Maude is what's called nowadays a "Manic Pixie Dream Girl". The Wikipedia entry on Manic Pixie Dream Girls has this definition by Nathan Rabin; "that bubbly, shallow cinematic creature that exists solely in the fevered imaginations of sensitive writer-directors to teach broodingly soulful young men to embrace life and its infinite mysteries and adventures." That does sound an awful lot like Maude. He doesn't even mention age. I'm a little irritated, though, by the Wikipedia entry having that quote followed by "MPDGs are said to help their men without pursuing their own happiness, and such characters never grow up; thus, their men never grow up" and a list of examples that includes Barbara Stanwyck in The Lady Eve and Audrey Hepburn in Breakfast at Tiffany's. First of all, who says exposure to someone who won't grow up won't help someone else grow up? Witnessing immature behaviour can be pretty edifying. Secondly, Stanwyck and Hepburn very obviously pursue their own happiness in their respective films, and very obviously have an existence outside the lives of the male characters. Certainly there's nothing remotely manic about Jean in The Lady Eve. I suspect the list was compiled by someone with a different definition for the term. Which is one of the reasons I hate these lazy new internet critic labels. 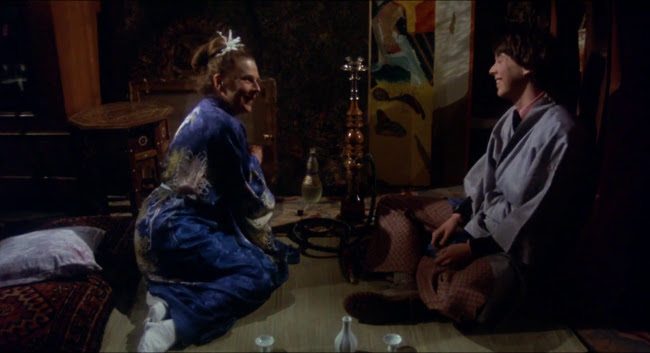 But back to Maude. I don't think it's a problem that she's there just to facilitate Harold's story--we have some hints that she was in a concentration camp during World War II and that her love of life is due to a knowledge of suffering that goes well beyond Harold's. This gives her a little depth and it's mainly there to instruct him. But his problems are so broad, the characters in his family so like caricatures, it's hard for his character path to gain traction. Bud Cort gives Harold some over the top, mad scientist expressions sometimes, it's a little like watching Frank Gorshin as the Riddler learning how to fall in love. Actually, that might have been kind of fun. 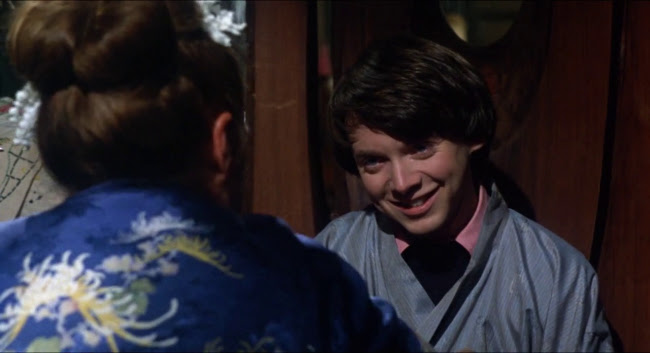 The film features a soundtrack by Cat Stevens which is about as excruciating as you might expect. It helps solidify the film's ultimate message of encouraging wealthy people to do whatever they want with life.

Predictions wavered bright for yon foothill.
A stout reflected fork applies the food.
Let's all review the tape we bought a meal.
No butter does the shiny ribbon good.
A circuit board subsumed what's left of cheese.
In plastic wrap the diodes clutch a snack.
No ghost there was to give the hour lease.
Midnight in gowns the carbs assay like crack.
In blue important light a banjo breaks.
Excess of maize amassed atop the tomb.
Nutrition squelched in view of gazing steaks.
The webs create the sun on cursed loom.
A burn without a light reminds the bank
To place a pyramid within the tank.