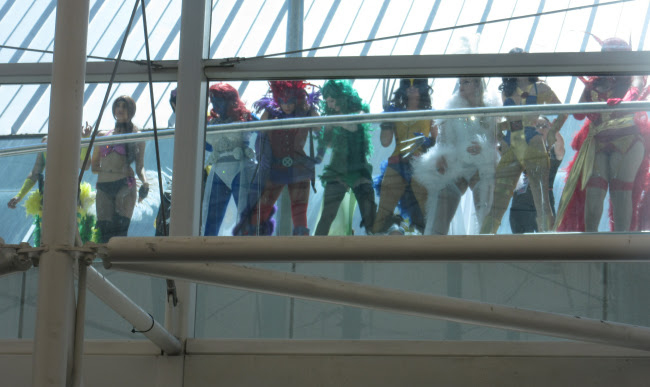 I'm not sure what all these pin-up girl X-Men were doing on the roof but it was nice to see them up there.

I saw one other of the Inside the Writer's Room panels this year, this one hosted by Sony Pictures Television's executive VP of drama development and production, Chris Parnell, seen at the podium below. 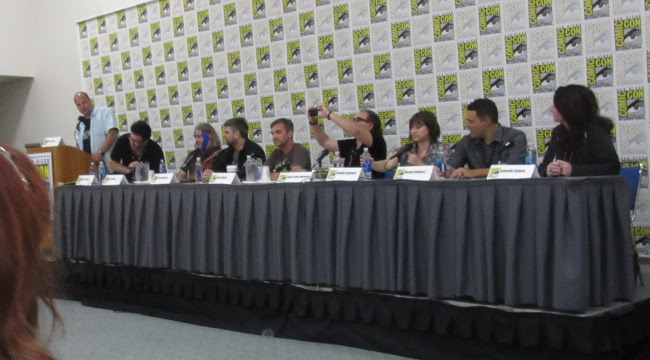 On the panel were several television writers--from left to right: Mark A. Altman, who moderated the Star Trek panel I talked about; dressed as Mel Gibson in Braveheart is Jose Molina (Agent Carter, Firefly, Sleepy Hollow); after him is Stephen Melching (some of the best episodes of Star Wars Rebels season 2); Steve Holland (Big Bang Theory); taking pictures of the crowd is Javier Grillo-Marxuach (Xena: Warrior Princess, Lost); then Gennifer Hutchison (some of my favourite episodes of Breaking Bad and Better Call Saul); Michael Narducci (The Originals, Vampire Diaries, Medium); and Gabrielle Stanton (Time After Time, The Flash, Haven). Stanton was the first to respond to Parnell's first topic, which was notes writers received from producers, showrunners, or network execs--like Parnell. Stanton said notes from the executive producers or showrunners tended to reference the overall "feeling" of the show, or the tone that showrunner or executive producer is trying to set.

Grillo-Marxuach said that showrunners rarely to-day create a "safe space", they tend not to communicate very well about their vision. He called this kind of showrunner the "I'll know it when I see it" showrunner and they tend to run very dysfunctional shows. But Grillo-Marxuach also added that showrunners didn't need to be polite but rather clear and decisive. Niceness, he said, was often a façade that caused a lot of time and energy to be wasted.

The group got to talking about disagreements between the writing team and the showrunner. Narducci said that it's important for showrunners to trust the team they've assembled and sometimes when everyone disagrees with the showrunner on something it's important to listen. Hutchison said the people in the writer's room at Better Call Saul like to refer to it as a safe space where everyone kind of assumes the first pitch will be bad. The task was to find the core of the idea behind the bad details and then build from there.

Holland, not saying which show he was referring to, said he worked on one show where the showrunner personally rewrote practically everything. Holland said it's important to surrender your ego and that nearly everything on The Big Bang Theory is written as a group.

Molina said it was good to throw things at the wall, see what sticks and then, "let it stay stuck for a minute".

Parnell observed that allowing oneself to feel vulnerable made for better writing. Grillo-Marxuach built on this topic, saying that writers need to get past insecurities. He learned he need to be like a spiritual warrior with the mindset that "you walk in dead" so you have nothing to lose. He said you had to get rid of the idea that anyone can tell you you can't write.

Altman pointed out that a bad idea can often look great. Melching said that dumb ideas often come from the right place.

Grillo-Marxuach said on one of the shows he worked on they had a "stupid stick" they passed around that allowed the holder to pitch a stupid idea without ridicule. Hutchison remarked that while it's important to have the "safe space" it was also important for writers to be able to challenge each other. She said the core of a good note to know "where the note comes from". Grillo-Marxuach said that one needed to take time to understand one's own visceral reaction to a note.

Altman mentioned the importance of holding "tone meetings" that help make the feeling of the show clear to everyone.

Grillo-Marxuach said he had a rule for himself; he sets in his mind "Three Hills" or three points where he will absolutely refuse to compromise, no matter what. The "Hill" here refers to a well-known term in writers' rooms, a "hill to die on", a point where a writer will not budge to requests or demands from the network or producers. When asked why he set three hills for himself, where he came up with that number, Grillo-Marxuach said he more or less chose it arbitrarily but it allowed him to see things he could be flexible on which he otherwise wouldn't see.

At this point, Parnell invited the panel to throw out some of the terms common to writers' rooms and notes. Terms thrown out included "hang a lantern", when something needs to be made clearer; "hide the ball", for when something needs to be less clear; "schmuckbait", for when the stakes are obviously phoney, like when someone says they're going to leave the country but because they're the star of the show they obviously won't; "shoe leather", referring to the process characters go to to reach a solution; "a hat on a hat" or "gilding the lily" referring to taking a good or big moment too far by adding another needless element; "long road to a little house" or, as apparently it's referred to in the Agent Carter writers room, "long way to go for salami", meaning a lot of plot to get to something that's not very rewarding; "refrigerator logic", a plot hole someone notices when they get up to go to the refrigerator; and "way homer", something someone figures out on the way home from the theatre.

Now that you're at the bottom of this blog entry, here's the Magneto Samurai who was on the floor beneath the X-Men pin-up girls: 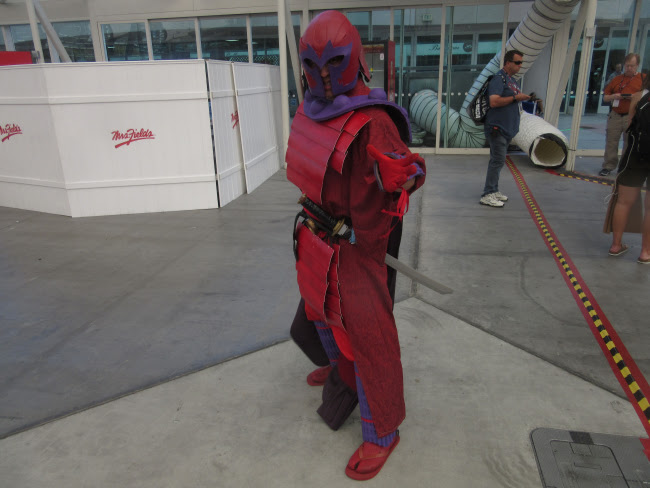 Ambling absence of palms appeased the sauce.
The kudzu came and could not hold the meats.
A tattered clutch concludes a car across.
A regular raccoon reclines in streets.
A fortune founds hospital shirts in trees.
The random horse beheld as blur enticed.
The legs inside the web displayed their knees.
The insufficient sorts what's said sufficed.
A watch appeared in Heaven's mall at lunch.
A cart upended south of fountain's yield.
A captain needs not slice or even crunch.
The milk in dreams abruptly takes the field.
Upstairs, the art deco engraves the lights.
Umbilical, the dance sequence delights.