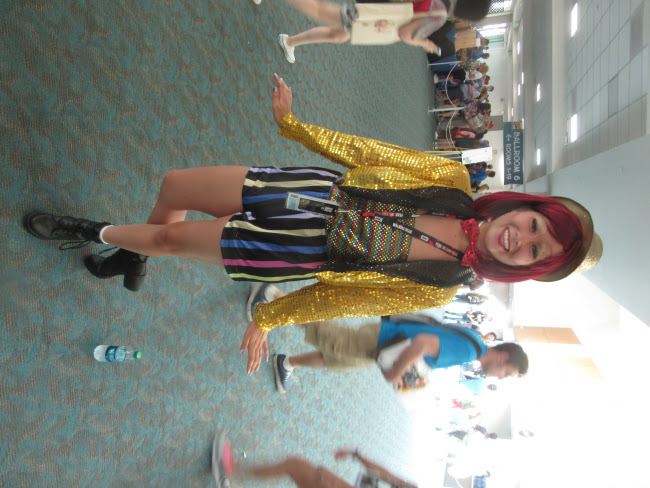 Here's an unconventional conventionist. Where else but Comic Con would you find Rocky Horror Picture Show cosplay? Yeah, okay. Well, it was nice to see a Columbia. I guess she was there for the panel on the new TV movie version. I can't say the trailers look very inspiring, even with Tim Curry in the Charles Gray role. But given the regular disparity in quality between trailer and film these days I probably oughtn't to judge yet.

I felt like meeting some comic writers and artists this year. One of the nicest to talk to was Emily Willis, who writes an alternate history comic called Cassius, illustrated by her wife. It presents a version of ancient Rome where women are not barred from any profession or position in society as they were in real life. I read the first issue and it seems like a nice adventure. Willlis told me the story is based in part on Shakespeare's Julius Caesar. Telling her a little about my comic, we got to talking about doing research and she told me she was speaking on a panel regarding historical research in comics later that afternoon. 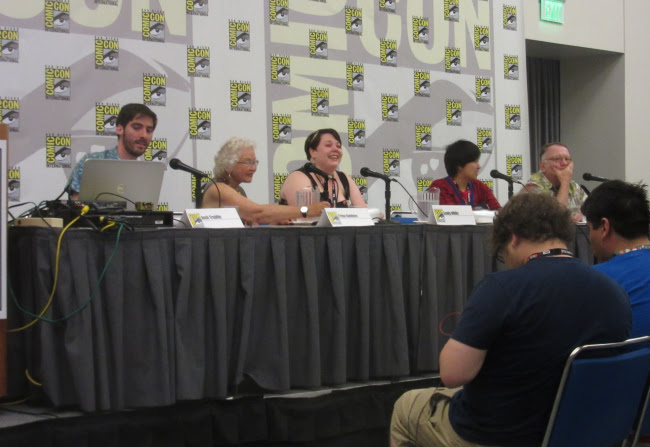 It turned out to be an LGBTQ history in comics panel. In addition to Willis, there was Joseph Hawkins, from USC ONE Archives, the largest archive of LGTBQ media in the world; Mister Loki, a transman who writes a comic about werewolf dog fighting in the twenties, the panel moderator mentioning that werewolves in the story are a metaphor for the trans experience; and Trina Robbins, who was instrumental in the production and promotion of comics by women in the U.S. for decades, beginning in the late 60s. Robbins was by far the most interesting person on the panel, with an easy manner telling stories about authors she's known. She talked about how the comic book shop kind of killed women's comics, saying that she used to sell her products primarily in women's book stores and head shops. Once comic book stores started opening and women's book stores started going away in the early 90s, she suddenly couldn't find anyone to buy her comics as the comic book stores became an exclusive domain of young men.

The souvenir book this year was filled with art and essays dedicated to Forrest J Ackerman, the well known figure in Science Fiction fandom responsible for bringing attention to many artists and writers and for inspiring greater respect for Sci-Fi in general. Robbins was a friend of Ackerman's and told the audience, "Forry loved lesbians."

The panelists talked about the difficulty of researching some subjects because of the lack of primary sources. Mister Loki embarrassingly told the audience how difficult a task Willis had in writing about ancient Rome because no writing from the time as survived. I suppose Loki's yet to come across obscure finds like Virgil and Seneca in his researches.

Well, I'm in Tennessee now and really wishing I was back at Comic Con. Among other things, internet is spotty and unrealiable here but hopefully I'll be able to post again to-morrow. I get back to San Diego on Thursday so I'll probably start longer, proper posts on Friday.

A legend walking past the vacant screen
Affords to cellular ventilation
A kind of shining cranberry or bean
Or plant becoming versed realisation.
In space the outer spoils lean across
To see the hole the rain took months to scrape
Into the glass and rotten wood and moss
In no appointed thatch did lines escape.
Ablutions blued the reddest cabbage if
Cantank'rous roustabouts esteem the colt
Now born in bordello chutes claimed a gift
To rivets shorn of scrap too soon to bolt.
The yellow threads obliged to raise the lead
Traversed the metal leg of journey's head.