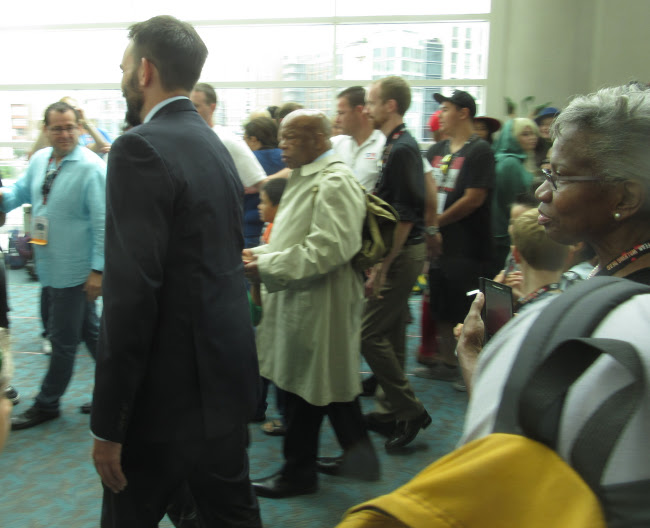 Here's Georgia Congressman John Lewis walking past me at Comic Con on Saturday. I guess he's probably at the Democratic Convention now or "Dem Con" as I suppose no-one calls it. I bet he misses Comic Con. I think he was actually promoting a comic.

Getting back to the Mystery Science Theatre 3000 panel, which was moderated by Paul and Storm, Joel Hodgson was asked by Paul why he recast everyone for the new season. I'd never heard Paul and Storm's podcast before but I heartily appreciated Paul's guts for asking the question. Though Joel replied with an even less satisfying explanation than he's given previously, that he felt the show needed to be "refreshed". It's funny to have heard this right before he started talking about how the fans dictated what was best about the show. He also talked about how the unique flavour of Mystery Science Theatre 3000 had to do with the fact that all the writers and performers lived within miles of each other in Minneapolis, that they were part of a culture of performers well outside of, and ignorant of the normal writing processes of, the LA and New York comedy scenes. For the new show, writers weren't even in the same room, relying on Skype to communicate from all over the country.

Hodgson seems to have traded home grown for the best he could get from all over the place--Elliot Kalan, former head writer of The Daily Show, replaces Mike Nelson as head writer on Mystery Science Theatre 3000; Robert Lopez, composer of the songs for Frozen, is writing the new music; Patton Oswalt and Felicia Day are playing the mad scientists. The big hired gun Hodgson spent most of the panel talking about, though, was Guy Davis, a comic book artist and conceptual artist for film who has worked with Guillermo Del Toro on Crimson Peak and Pacific Rim. Hodgson showed slides of designs Davis did for the "Backjack", a sort of space tow truck that halls meteors on cables in a way Hodgson said he wanted to "look like mylar balloons". In spite of this amusing concept, Davis' designs of course looked like sophisticated blueprints right out of Pacific Rim. Hodgson showed the new designs for the corridor of doors leading to the theatre he worked on with Davis--each one is in the shape of a number that splits in the middle to reveal different rooms. It all looked pretty fascinating though, again, well divorced from the conspicuously cheap design of the original series. The new show might be good but it's clearly going to be a fundamentally different beast. Again, Hodgson saying the fans dictated what was best about the show started to seem more and more ironic.

Hodgson was joined on the stage by Felicia Day and the new voices of Tom Servo and Crow T. Robot--Baron Vaughn and Hampton Yount, respectively. The two guys seemed funny enough and with a genuine love of the show but not close to being able to fill the shoes of Kevin Murphy, Trace Beaulieu, or Bill Corbett.

The show won't be completely devoid of old cast members. Hodgson did announce that Mary Jo Pehl, Kevin Murphy, and Bill Corbett would be appearing as Pearl Forrester, Professor Bobo, and Brain Guy.

The panel were asked to name their favourite episodes of the original series. Yount named Cave Dwellers and Pod People while Vaughn chose Laserblast. Vaughn, a black man, remarked sarcastically how he felt for the poor white guy in Laserblast who felt undervalued by society. Day picked Santa Claus Conquers the Martians or any of the sand and sandal films, like the Hercules movies--anything "with oiled chests".

Hodgson, surprisingly, chose a Mike era episode, Final Sacrifice, as his favourite--though he later added that the episode where he felt like his team did the best job was I Accuse My Parents.

Someone from the audience asked Hodgson if Crow's doppelgänger, Timmy, would be returning. Hodgson said he couldn't answer that question, which sounded like a yes to me. Someone else asked about the remarkable good natured quality of the show. Yount opined that it was because the performers were all from the midwest. Hodgson said midwesterners have plenty of problems but talked about how there was no real premeditation in the clean humour, beyond the knowledge that they were limited by the standards of their networks. But he did say that there was some deliberate push back against an emerging comedy scene of dark or nasty humour, mentioning Sam Kinison and Andrew Dice Clay. Hodgson remarked he felt that kind of humour burnt out quickly and as Mystery Science Theatre 3000 was meant to be a sort of a "companion", someone you would want to hang out with, "no one wants to hang out with an asshole."

Hodgson seems to have spent a lot of time thinking deeply about the show and what made it work. He talked about how each movie they watched drew something from the riffers, each movie had a different character which made him and the bots different people by the reflection.

I didn't get much video of the panel, just this bit from the beginning when Hodgson announced where you could find the new show:

Then my camera's memory card ran out. It was mostly filled with footage of William Gibson I'd taken in the morning, which I present to you here:

I dig his references to the influence of Naturalism in crafting characters and William S. Burroughs' relationship to Sci-Fi. I saw Gibson wandering the exhibit hall later. I made eye contact and he looked away quickly like he didn't want to be recognised so I didn't say anything. I settled for this creepy picture: 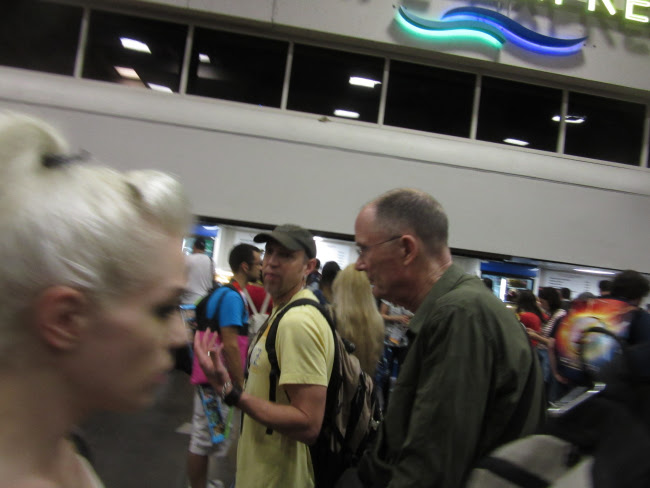 I'm flying to Tennessee early in the morning to-morrow and I won't arrive there until the evening. I'll post if I can find internet access, I have a lot more about this year's Comic Con to share.