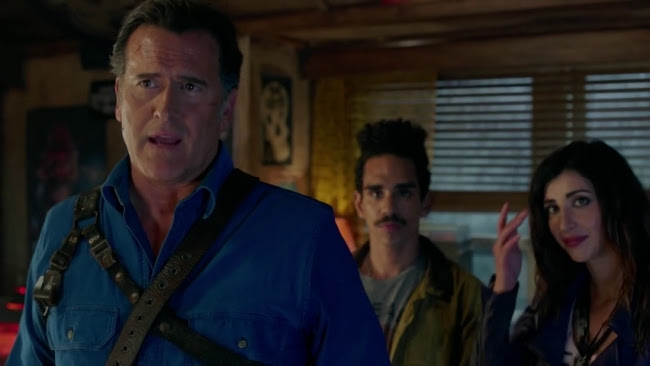 Another thing this episode demonstrated to me is that it could be improved a lot by removing Ruby and Pablo. Kelly is still not a very well defined character but it was a pleasure seeing how much fun actress Dana DeLorenzo had playing her in this episode. And, really, Ash started out without very much definition, too, and he came to be defined by Bruce Campbell's performance so it would be pretty fitting if DeLorenzo built the character this way. She manages to make the old bit about a soda stuck in the vending machine funny and just the exasperated way she says, “fuuuuck,” is great. 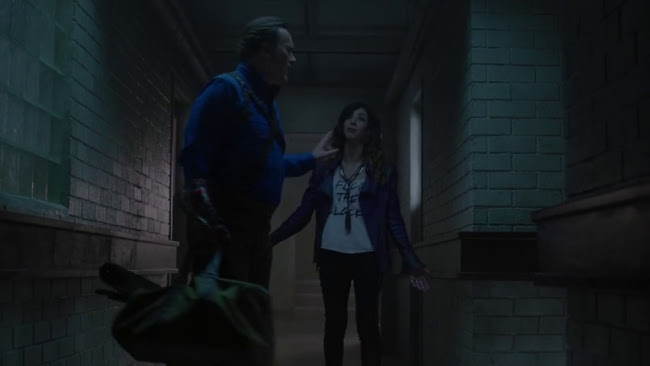 Pablo's issue with hallucinations is kind of interesting but both his pining for Kelly and the not-racist-actually-racist-but-not-racist humour about his heritage are both generally tedious. Anyway, in true Evil Dead tradition, the lifespans of most of the characters ought to be pretty short. 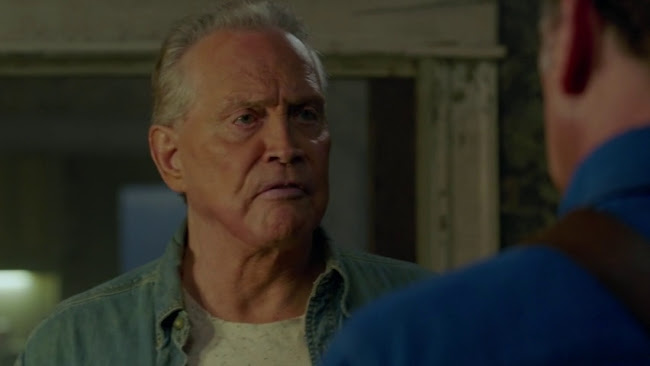 I'm continuing to enjoy Lee Majors as Ash's father--the dialogue between Majors and Ash's former teacher (and lover) was funny. I also loved Kelly and Ash mocking the kids in the street even though I knew immediately it was going to come back to haunt them. But the centrepiece of the episode was really the culmination of Ash cutting up bodies in the morgue. 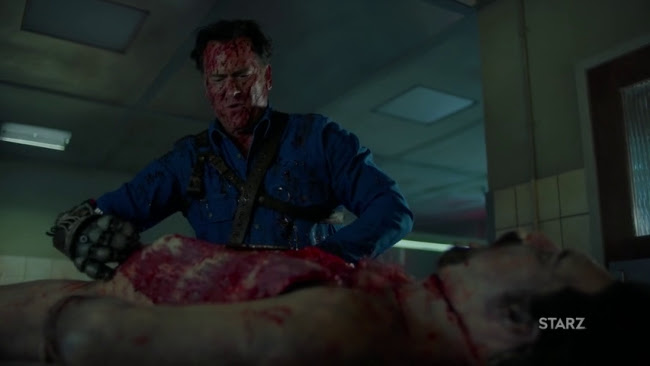 The battle at the end may be the closest thing to a film adaptation of Chuck Palahniuk's "Guts" we'll ever get. Thank the gods. Poor Ash. Obviously we knew the dead were evil but this evil? I am far from squeamish--this is the first time I can remember, in thirty years, cringing while I watched something. So thanks, Ash vs. Evil Dead, for making me feel again. I'm definitely human and capable of emotion. And all the comedy afterwards--Kelly riding with her head out the window in a futile attempt to escape the smell--was also great.

*Maybe I shouldn't be challenging people to prove me wrong on this.

Posted by Setsuled at 8:10 PM
Email ThisBlogThis!Share to TwitterShare to FacebookShare to Pinterest