Lurking in the Spotlight 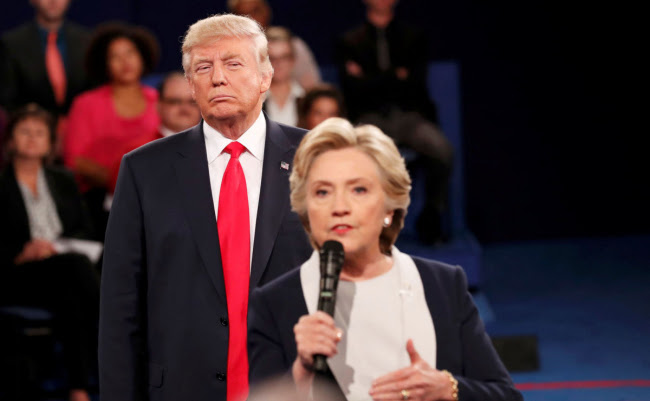 He's just standing behind her. Why, during the debate, did I suddenly see so many people on Twitter comparing shots like this to screenshots of Michael Myers standing behind Jamie Lee Curtis in Halloween? Sure, people hate Trump and it's October, but there's something more to it than that. It resonates. Just now I saw this image on Caitlin R Kiernan's Facebook: 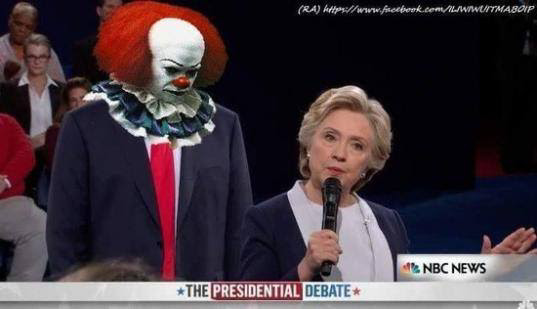 The Daily Mail, of all publications, has published a long list of different tweets and posts along these same lines.

It isn't normal body language for a debate. Typically in the town hall debates, when one participant is speaking, the other participant does what Clinton did last night--sit down and make notes. Then there's the fact that he's twice her size, he's a man and she's a woman, and the debate came at the end of a weekend where everyone had been talking about a leaked tape where Trump bragged about sexually assaulting women. I saw a few articles that talked about how it was very unlikely that Trump would actually assault Clinton during a debate. But clearly, the possibility was on a lot of people's minds.

But there's even more to it than that. The stalking movie killer behind his intended victim fits on an even deeper level. To explain why, I want to talk first about the way such a monster works in a horror movie.

In the original Halloween, Michael Myers is a character we learn very little about, a fact that's emphasised by his mask. He wears a detailed replica of a human face and it presents to us a lack of emotion. That Myers wears this mask instead of a ski mask or hood is an expression on Myers part. This is what he wants to present to victims and bystanders as he attacks without hesitation.

In the television adaptation of Stephen King's It, Tim Curry plays a creature who presents a double counterfeit of human features, too. On one level, the creature pretends to look like Tim Curry, and on top of that there's the clown makeup, exaggerated human features which also have the effect of distorting and hiding human emotion. In the case of both monsters, neither seems to question its right to kill people. Michael Myers is introduced as a child and the impression is that, when he grows up, he's essentially unchanged; Pennywise, the clown from It, is essentially an animal. Both have the semblance of adult human being but the horror is in the discovery of an interior that lacks a capacity for empathy and an unashamed urge to satisfy its needs at the expense of others.

Donald Trump is a counterfeit presidential candidate. As Clinton observed in the debate, normally she would have a Republican opponent she would disagree with but whom she would consider basically competent. Trump has repeatedly shown ignorance of foreign policy and an extraordinary arrogance, comfortable asserting that he knows more than generals, confidently asserting that climate change is a hoax, and, of course, unwavering in his insistence that Obama wasn't born in the United States. It doesn't matter what people who have trained and studied matters say, he has supreme confidence that he knows better.

This is bad. This was funny in the first debate. It became scarier in the second debate when applied to the dynamics of a physical relationship.

Before the debate, Trump had arranged a press conference where women who've accused Bill Clinton of sexual assault or harassment spoke. This was a strategy not cooked up only by Trump himself, I feel sure, particularly after hearing an interview with Rudy Giuliani where the former New York Mayor said it's pointless to discuss the issue of sexual wrongdoing because both candidates are equally bad. Then I understood--some strategist at the Trump camp said, there's no stopping the damage from Trump's tape, all he can do is try to bring Clinton down to the same level. Of course, this has the big glaring flaw in that Hillary Clinton would be seen by all but the most sociopathic as a victim of Bill Clinton's affairs, not a collaborator. It's a startlingly antiquated tactic to lay blame on a wife for a husband's dishonour.

But the way this contributed to the first stage of why the debate made me feel sick watching it is that it was clear that Clinton and Trump didn't belong in the room together presented as equals. Hillary Clinton, a consummate professional who's been in politics and public office virtually all her life, and Donald Trump, who has misappropriated charity donations, bragged about not paying taxes, and bragged about committing sexual assault. The very fact of Clinton having to be in this situation was unnerving. Then, on top of that, Trump clearly didn't understand what he'd done wrong and didn't care.

This is why the moderators sounded so nervous. Anderson Cooper sounded on the verge of tears the whole evening because there's something really frightening about this guy who can't even respond to Cooper's repeated question about whether or not he understands what he bragged about was sexual assault. The "locker room banter" excuse not only becomes thin, it becomes an absurd caricature, like clown makeup or a mask. And Trump is clearly getting angry because he doesn't understand the reality other people live in and he wants to force his version of reality onto everyone else.

He becomes angry instead of frightened. The fact that people start to sense this malevolence makes them frightened and this ends up in a contrast between a confident psychopath (let's just call him what he is) and the people who are unsure. And confidence is more charismatic. That's why Trump was getting laughs and applause. Which further gives the sickening impression of the legitimising of the grossly illegitimate. It takes to a new level the feeling that Trump's candidacy has inspired all along, that no matter how bad he is, he continues to succeed, which makes every rational reaction to him seem irrational. Trump is gaslighting the whole country.