That Pesky Key to Time 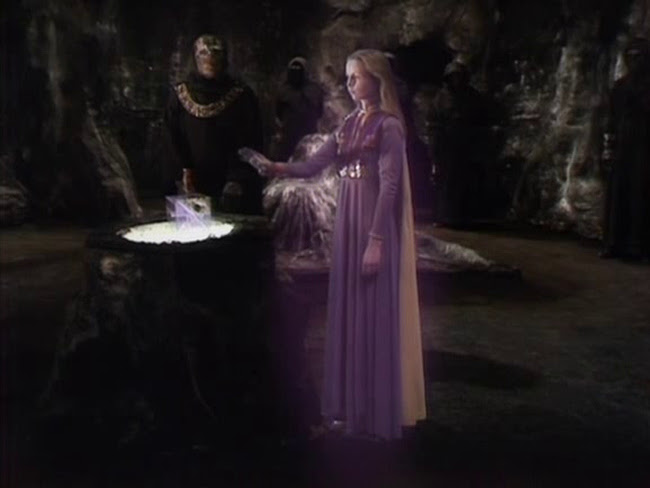 It's now pretty normal for a season of Doctor Who to have a unifying story arc but it was an unusual season in 1978/79 that had the Fourth Doctor and Romana looking for new segments of the Key to Time every episode. In 2009, Big Finish released a series of three Fifth Doctor audio plays that form a sequel arc to the original Key to Time season, a mostly entertaining effort that takes care of a few loose ends from the original story in satisfying ways.

The Judgement of Isskar, The Destroyer of Delights, and The Chaos Pool ran through the first three months of 2009 and featured Peter Davison as the Fifth Doctor and Ciara Janson as Amy, a companion who joins him in this series for the first and last time. She looks like an adult but she's a recently manifested spirit of time related to the Black and White Guardians, the two omnipotent entities who seek to control the Key to Time. The original Fourth Doctor television arc had the Doctor and Romana collecting the pieces of the Key scattered throughout space and time as part of a mission given to them by the White Guardian. The Black and White Guardians later appeared in an arc of Fifth Doctor episodes in which the Black Guardian manipulated the Doctor's companion, Turlough, to commit foul deeds, something the Doctor doesn't fail to bring up in these audio plays.

Unlike the other Doctors, there's no pocket of time established on the television series when the Fifth Doctor was travelling alone so it's a little trickier for the audio play writers to introduce new companions for him. The Pharaoh audio companion, Erimem, travelled with the Fifth Doctor along with his final television companion, Peri. But in every episode of the television series where a companion departs, either the Doctor has other companions with him who stay on for the next episode or his next companion is also introduced. For the few audio plays where the Fifth Doctor has not had a companion, the writers have been forced to throw in an explanation about how he left them on a planet somewhere for a vacation or something. The Judgement of Isskar has the Doctor vaguely alluding to Peri being lost somewhere.

In The Armageddon Factor, the Doctor had substituted a synthetic segment in the Key to Time in lieu of the actual segment which turned out to be a person. In The Judgement of Isskar, Amy reveals this has caused the Key to come apart again so, like in the original story, she's drafted the Doctor into tracking down all the pieces. Written by Simon Guerrier, The Judgement of Isskar features the Ice Warriors and Amy and the Doctor visit their world, Mars, long before they became a warrior civilisation. In fact, they're an extraordinarily peaceful people with an economy based entirely on freely given gifts. The story reveals how they went from this to being a warlike people in a nice way. Also of note, this was the first time I've seen or heard any female Ice Warriors.

The second story, The Destroyer of Delights by Jonathan Clements features guest star David Troughton (son of Patrick) as the Black Guardian himself. In an interview included with the CD, Clements discusses how he hates to write omnipotent characters so he decided to render the Guardians almost powerless due to the absence of the Key. So the Black Guardian assumes the identity of an ancient Sudanese lord in a story based on an actual incident in the ninth century where a lord, for unknown reasons, refused to pay taxes one year. The story has some thoughtful explorations on slavery as Amy is mistaken for a slave when she's separated from the Doctor and is taken under the wing of another slave. Clements explains in the interview that he feels there's something fundamentally misogynist about the typical Doctor/Companion relationship, an assertion he doesn't really back up with a cogent argument, so having Amy as a slave was somehow supposed to be a comment and subversion of that. He seems to have thought the best way to do this was have Amy and the other slave spend a lot of time talking about how much they'd like to please their men. This combined with his idea that omnipotent characters are invariably boring wouldn't have filled me with a lot of confidence in him as a writer but the story does turn out to be a pretty entertaining adventure.

The final story, The Chaos Pool by Peter Anghelides has Amy abruptly becoming a much more assertive, even rather catty companion as the two find themselves on a strange spacecraft being attacked by another ship. The Doctor hears communications from the attacking ship and he recognises the captain's voice. Lalla Ward appears as the second incarnation of Romana in this one which nicely not only resolves the human Key segment problem but even attempts to tackle Romana's bizarrely casual regeneration in Destiny of the Daleks. "It seemed funny at the time," remarks Romana, which doesn't quite cover it. The explanation provided by the story doesn't feel quite solid but I'm certainly glad someone tried to explain it.

Posted by Setsuled at 8:06 PM
Email ThisBlogThis!Share to TwitterShare to FacebookShare to Pinterest